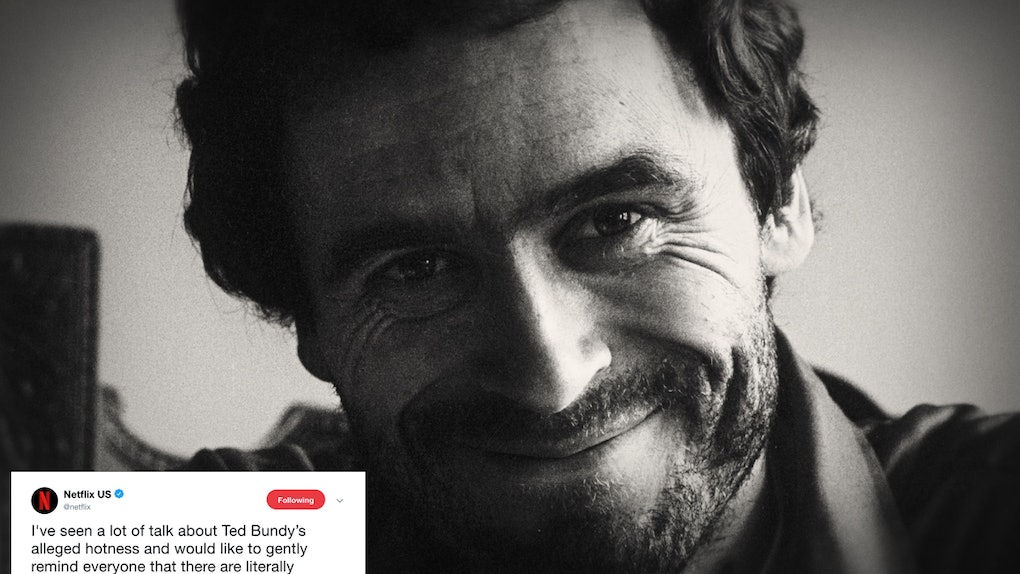 Ted Bundy is having a cultural moment right now. Even though it's been almost 50 years since the serial killer was at large, people can't stop talking about him right now. That's thanks to a bunch of new content being produced about the life, times, and crimes of Bundy, including the new Netflix docu-series Conversations with a Killer: The Ted Bundy Tapes and a Zac Efron-starring biopic called Extremely Wicked, Shockingly Evil and Vile that just premiered at Sundance. While a lot of people are horrified by his terrible actions, others are more preoccupied with how he looked while doing them: specifically the fact that he was so good-looking. But, Netflix's tweet about Zac Efron looking "hot" as Ted Bundy slammed fans for focusing on the murder's appearance.

Bundy was convicted in 1979 of killing several women in gruesome crime slayings throughout the 1970s. As the new docu-series and biopic note, Bundy was in part able to commit his crimes because he was seen as conventionally attractive and charming. His victims and the authorities didn't expect a handsome man to be dangerous, which is why it makes sense that the conventionally handsome Zac Efron is playing Bundy in Extremely Wicked. Efron doesn't look like what what people would expect a serial killer to look like, the same way Bundy didn't either. But, instead of thinking about how Bundy used his handsomeness against his victims, a lot of folks are simply tweeting about how hot Bundy was, period. So, Netflix fired back:

Efron has said before that he does not want his performance to be a positive depiction of Bundy. He told Variety:

I feel a responsibility to make sure that this movie is not a celebration of Ted Bundy or a glorification of him. But, definitely, a psychological study of who this person was. In that, there’s honesty.

Efron is trying to provide an honest portrayal of Bundy, and in doing so, he and everyone involved does need to acknowledge that Bundy's looks were a part of his dangerous appeal. According to the Netflix docu-series, during Bundy's trial in the late 1970's, the American public became enamored with him, and women especially adored him. It made his crimes all the more haunting.

Part of the key to acknowledging Bundy's looks is also acknowledging that the attraction to him was part of his horrific danger. One survivor of Bundy's crimes spoke out about all the recent attention focused on him. Kathy Kleiner Rubin was 20 years old when Bundy attacked her in 1978. She told TMZ:

I don't have a problem with people looking at [the Bundy biopic], and as long as they understand that what they're watching wasn't a normal person. I believe that in order to show him exactly the way it was, it's not really glorifying him, but it's showing him, and when they do say positive and wonderful things about him... That's what they saw, that's who Bundy wanted you to see.

So viewers are justified in thinking Bundy was hot, since that was the truth. But, Netflix probably does have a point in making sure fans aren't glamorizing a serial killer. Fans need to focus on Bundy's crimes and then channel the real pining on some nice Netflix guys, like Jim from The Office.

More like this
Is Netflix Making A 'To All The Boys' Spinoff Series About Kitty? Here's The Tea
By Rachel Varina
'He's All That': Premiere Date, Cast, Trailer, Filming News, & More
By Dylan Kickham
10 Rainy Day Movies To Watch On Netflix That Are Perfect To Pass The Time
By Kristen Perrone and Lexi Williams
Stay up to date