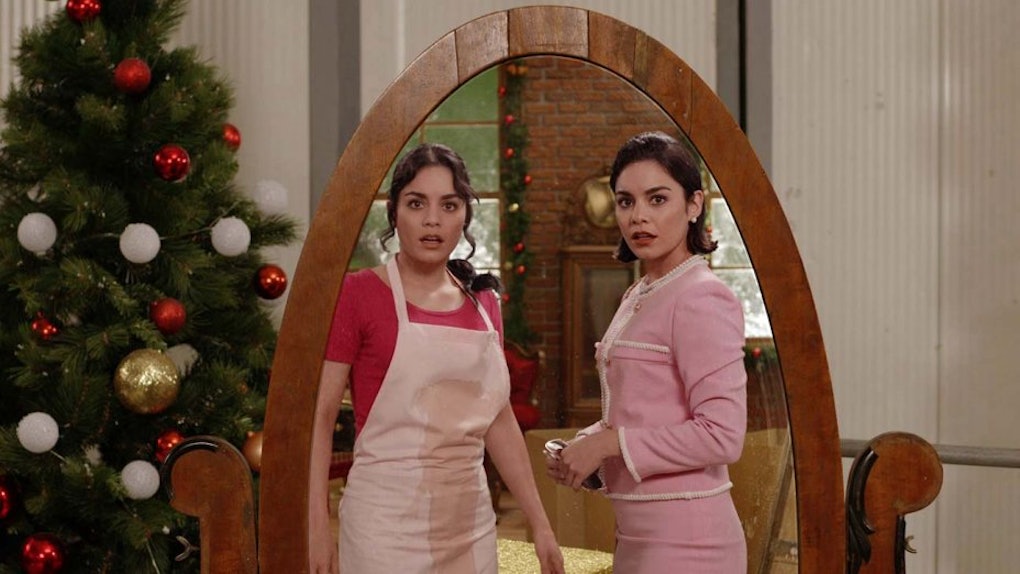 Up until very recently, Hallmark and Lifetime were the two major players when it came to the Christmas movie game... until Netflix rolled in with its first Christmas movie in 2017. Now, the streamer is crowning itself the true queen of Christmas flicks by announcing its official Netflix Holiday Movie Universe and revealing how all its holiday movies are actually connected. Get ready for your mind to be blown.

It all started when an eagle-eyed viewer noticed a prop from the 2017 movie A Christmas Prince showed up in this year's The Knight Before Christmas. In the latter movie, Vanessa Hudgens' character's sister gave her daughter a gift: an acorn ornament from the country of Aldovia. It looks exactly like the acorn ornament that played a pivotal role in A Christmas Prince... which was set in Aldovia. That means the two movies must exist in the same world.

The connections don't end there. As reported by HelloGiggles, in the sequel to A Christmas Prince, called A Christmas Prince: The Royal Baby, a quick shot of a map revealed the fictional country of Aldovia is bordered by Belgravia, and later on in the movie Belgravia is mentioned out loud. If you'll recall, Belgravia is the fictional country in Hudgens' other Netflix Christmas movie, The Princess Switch. With the two countries as neighbors, that means the events in each film must have taken place just over the border from each other.

Since both the worlds of The Knight Before Christmas and The Princess Switch seemingly exist within the world of A Christmas Prince, does that mean the characters in each movie will eventually cross paths with one another? In The Princess Switch, Hudgens played both a Montenegrin duchess and an American baker, so does this revelation mean her Knight Before Christmas character is a third lookalike? The possibilities for crossover events are truly astounding.

Another detail that makes me feel like I'm solving a weird Christmas riddle is the fact that The Princess Switch includes a scene of two characters watching A Christmas Prince on Netflix. Do the characters see the movie as a fictional narrative about the totally real country of Aldovia? Or is A Christmas Prince a documentary about Belgravia's bordering country? This is all a lot for fans to have to take in during a night of light-hearted Christmas fun.

Luckily, Netflix has jumped in to provide a little context. The streamer tweeted out a chart that explains some of the connections between its various Christmas movie worlds.

Many of these movies were produced by MPCA, and the executive vice president of the company, Amanda Phillips Atkins, explained that it all started when they needed a movie to play in the background of 2018's The Holiday Calendar. So, they turned to their own catalog of movies, and the connections grew from there. Atkins explained:

We planned to branch out from just having our characters watch each other on TV. We thought it would be a great opportunity to build out a whole universe, not just for Aldovia but for the whole world of our Christmas movies!

The Netflix Holiday Movie Universe will only expand in the future. In 2020, The Princess Switch will get a sequel called Switched Again, and a movie called Operation Christmas will also be released. No one knows exactly how these movies will fit in to the universe, but one things is for sure: Fans should get ready to study every detail in them for other NHMU easter eggs when they come out next year.