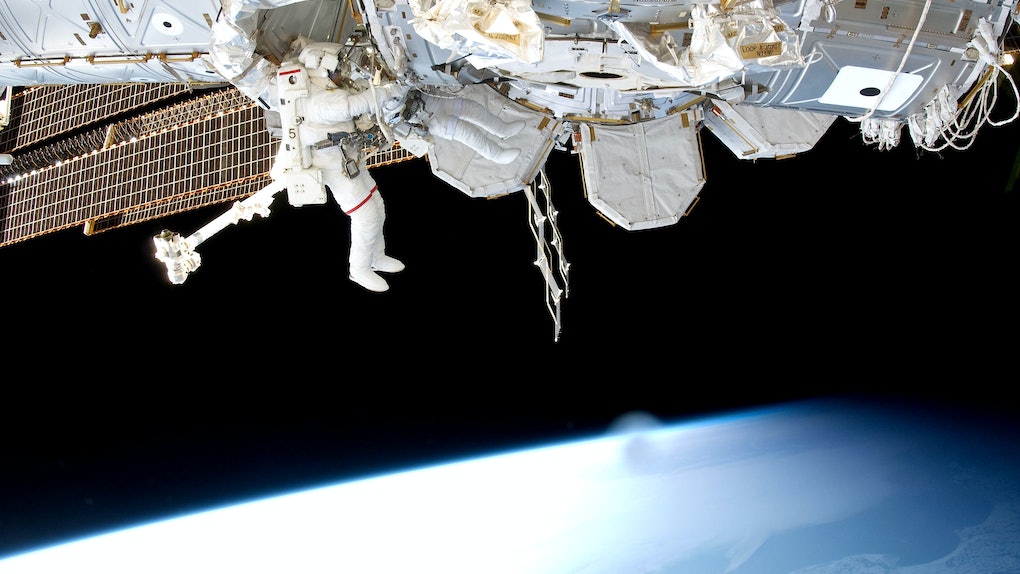 NASA's All-Female Spacewalk Will Be A First In History

March is Women's History Month, and during this time we take a moment to appreciate all the strong women around us and the ones who have come before. But how often do we all get the opportunity to watch women's history being made? Well, come Friday, March 29, NASA's first all female spacewalk will give us the chance to see, as they make history with the first "unmanned" spacewalk. Get ready to watch, and be inspired.

On Tuesday, March 5, Axios reported that the first-ever-all-female spacewalk is scheduled to depart on Friday, March 29. The National Aeronautics and Space Administration (NASA) confirmed to Axios on March 5 that astronauts Anne McClain and Christina Koch will be on the spacewalk, while flight director Mary Lawrence and Canadian Space Agency flight director Kristen Facciol will be supporting them on the ground as part of the fly control team at NASA's Johnson Space Center in Houston, Texas. Despite this being a historic moment in history, NASA told Axios that the all-female team was "not orchestrated to be this way." Hey, I'm still not complaining.

So far, it hasn't been confirmed how long the spacewalk will last, but according to NASA's website it looks like it could be a seven-hour voyage. However, if I were McClain and Koch, I wouldn't mind spending some extra time exploring space.

To celebrate this massive achievement, Facciol took to Twitter to express her excitement for the opportunity to work on this spacewalk, noting it as a huge part of women's history.

I just found out that I’ll be on console providing support for the FIRST ALL FEMALE SPACEWALK with @AstroAnnimal and @Astro_Christina and I can not contain my excitement!!!! #WomenInSTEM #WomenInEngineering #WomenInSpace

While America's space exploration started off been pretty male-dominated, in the years since women have made their impact on the field. In June 1983, Sally Ride became the first American woman in space when she launched into space on the Space Shuttle Challenger on mission STS-7. Since then, many more women have taken off to make their mark.

According to NASA, both McClain and Koch are members of the 2013 graduating class, which was 50 percent female. And things have progressed from there — NASA selected five women to join the 2017 Astronaut Candidate Class, including Jessica Watkins, Loral O'Hara, Jasmin Moghbeli, Zena Cardman, and Kayla Barron. According to CNN, the most recent class of flight directors were also 50 percent women.

It's definitely an exciting moment, for both anyone interested in space (there's a lot of it), or women's equality and progress in the world. The announcement comes at just the right moment, too. Beyond Women's History Month, Friday, March 8 also represents International Women's Day, which celebrates women around the world and puts their issues in the spotlight. This year's theme? "Think equal, build smart, innovate for change," which honestly sounds right up the alley for a bunch of NASA astronauts.

A lot of work still needs to be done to reach gender equality, but judging from the recent developments in the space industry, it might be safe to say that change — among other things — is definitely on the horizon.

More like this
Ivanka Trump's Women's Initiative Failed Inspection, & It's A Mess
By Rhyma Castillo
What Is Taco Bell's Times Square Digital Cantina? It's A Unique Experience
By Lara Walsh
Here's How To Make Chipotle's Dragon Sauce With 2 Simple Ingredients
By Daffany Chan
Stay up to date