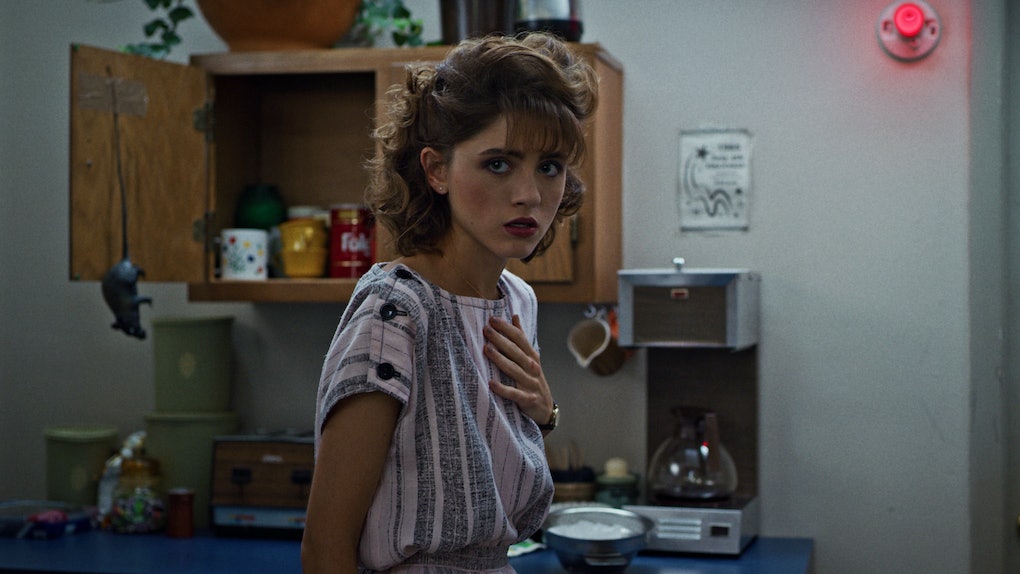 Nancy Wheeler has always been a character who pushes boundaries. When she first appeared in Stranger Things Season 1, she surprised audiences by stepping outside the typical "good girl" narrative by dating the bad boy of the high school and, y'know, slaying monsters. In Season 3 of the hit Netflix series, she becomes an even more complex character. Natalia Dyer spoke to Elite Daily about how her character Nancy's workplace storyline on Stranger Things Season 3 is way ahead of its time, and how it's still relatable today. Warning: Spoilers for Season 3 of Stranger Things follow.

When Stranger Things Season 3 begins, Nancy and her boyfriend Jonathan Byers (Charlie Heaton) are interning at the local newspaper in Hawkins, Indiana. While Jonathan is doing well as a photographer, Nancy is struggling in her role as journalist-in-training. She's working in an office of all older men who don't take her seriously at all. While she'd like to pitch them stories, they're more interested in her fetching them coffee.

"For Nancy, she has this whole situation at work, this whole sense of not being heard, of being undermined, of being deflated, which I think can be quite relatable for women in general," Dyer tells Elite Daily.

Stranger Things Season 3 takes place in 1985, but those same gender issues in the workplace still exist today. A significant wage gap still demonstrates professional inequality. In the last few years, the #MeToo movement has highlighted not only the need for women to be treated with more respect. Nancy's storyline, unfortunately, could just as easily take place today as it does in the 1980s.

Stranger Things has always had powerful female characters, especially Nancy and the literal-superhero Eleven (Millie Bobby Brown). But Dyer explains that this season gives her character the opportunity to really demonstrate her knowledge and strength by proving her bosses wrong.

"I do think the show’s paid attention to women," Dyer explains. "But I think this season more than the other ones gives them space to really take charge and say something."

Nancy isn't the only female character who goes through an important period of personal growth in Stranger Things Season 3. Her mother Karen, played by Cara Buono, also starts to reexamine her own journey as a woman. It all culminates in a heartfelt conversation between Nancy and Karen when Nancy confides in her mom about her work troubles.

"I think Karen’s reflecting a lot about her life, and she’s clearly made decisions where she’s had to give up things or had been discouraged and felt like she had missed opportunities," Buono says to Elite Daily. "And she doesn’t want her daughter to experience the same. So while giving her daughter advice, I think she is also trying to take her own advice as well."

Stranger Things is known for its wild creatures and twisting mythology. But some of the best moments for the cast come out of smaller, more emotionally grounded scenes like the workplace ones that Dyer delivers in Season 3.

"There’s a lot of fun stuff we get to do, like fun, crazy exciting stuff. But you get some of these scenes and you’re like, 'Oh man I can’t wait for this.' These just sitting, talking scenes [are nice] because that’s where a lot of the character development comes from," Dyer explains. "You get to have conversations with different people and it feels — especially in a fast-paced, sci-fi world — really nice to have to ground you."

More like this
'Shadow And Bone' Star Jessie Mei Li Can't Stop Watching These Niche YouTube Videos
By Abby Monteil
Lana Condor's Career Goals Are All About Representation — EXCLUSIVE
By Rachel Varina
Are Chloe & Mitchell Dating After 'The Circle'? Chloe Has An Update — EXCLUSIVE
By Dylan Kickham
Stay up to date