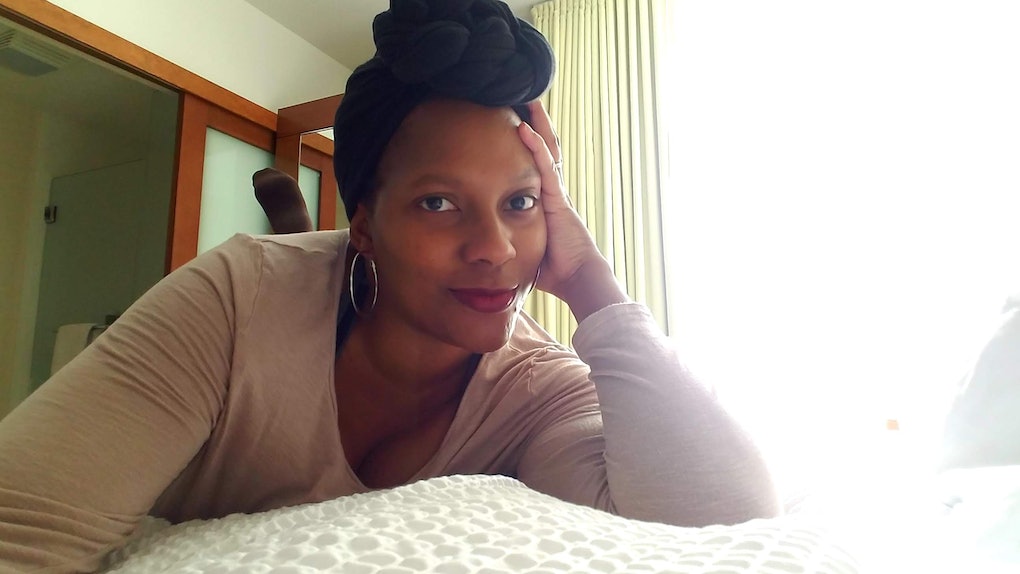 My Sexual Assault Still Affects My Marriage, Even Though It Happened 13 Years Ago

As conversations around the #MeToo movement continue, it's crucial to address the horrific byproducts of sexual assault. Being groped or raped doesn't end when the attacker leaves or by filing a police report. Survivors of assault often carry that moment with them for years afterward. I am all too familiar with this, as my experience with sexual assault affects my marriage’s intimacy, 13 years after it happened. It’s not my husband’s fault. It is the long-lasting consequence of an assault by an ex-boyfriend. Now, whenever my husband approaches me from behind, my body engages in a fight or flight response.

Panic rises from my gut and settles in my throat. My back stiffens, then my neck and arms tense in preparation to fight. I clench my teeth and stare straight ahead, abandoning whatever task I had been working on. Then I wait. I wait for my husband to touch me with all the intent and affection of someone who is in love with his wife. While my husband hugs me or massages my neck, I stand rigid and silent, willing myself not to brush him off me. I love this man with my entire heart, but moments like these are phantom reminders of a night when I was sexually assaulted.

In 2006, during my junior year in college, I was almost raped by my ex after I broke up with him. After dating Gregory for a month, and tolerating his manic behavior, I learned he was abusing prescription medication and had also lied about his identity. After he refused to accept my breakup over the phone, he asked to meet in person. I was uncomfortable with meeting him at my dorm or his house, and so instead, we met up at a street intersection off campus.

Gregory asked if we could walk around the neighborhood and we eventually stopped at picnic tables located at what I would later discover was a high school. He tried to justify his lies and apologized, but I told him I didn’t want to see him anymore. As I walked away, Gregory asked for “one last kiss.” Although I declined, he ultimately forced me to kiss him before leading me to a secluded area and pushing me to the ground. He stripped the clothes off my unwilling body, then attempted to penetrate me several times as I shouted for him to stop. We were in an enclosed space, a garden planter beside a building, with bushes surrounding us. The only exit was behind him.

Branches dug into my scalp and back as I dragged myself deeper into the shrubbery. All the while, he tore at my legs. I managed to shove him off me and got dressed while he sat bare-assed in the dirt, breathless and confused like he was awakening from self-possession. We exchanged a few words, but mostly he spoke about my "failure" to satisfy him and his ability to “call up any girl I want and she’ll finish me off.” His words sickened and angered me. I wanted to yell and slap him for his cruelty, but I was too defeated. I mumbled that I didn’t care and that I was done. I walked away, turned a corner, and ran the mile back to my dorm room.

That night in the dirt haunted me like an unrelenting poltergeist. The consequences reverberated into my present in insidious ways. I became anxious at parties when men showed interest in me. A lingering look or a sexually implicit conversation sent me skittering around corners and avoiding them. I couldn’t handle the jittering nerves that shook my body and the rising anger that threatened to overcome me.

Yet I was also bound to my own desires. I wanted to be intimate with another person. I drowned myself in alcohol to reach past the veil of fear surrounding me and step into a world where I was more confident in my body and sexuality. Under the influence of alcohol, I engaged in sexually risky behavior that often ended with me bailing because I was, after all, still afraid to open my legs. I was afraid that guys would call me a prude or, worse, frigid. I let my partners take the lead, believing that if I gave someone else control, I could get past my hesitation. However, I was often too uncomfortable being naked around them, let alone with their sensual touch. They called me frigid anyway.

Three years after the assault, I befriended the man who would later become my husband. Kevin and I met in graduate school in 2009. We had several classes together and became friends through peer study groups. His intellect and gregarious nature were attractive to me. Our friendship became romantic after one of his uncles passed away and I helped him process his grief. We dated for four years before we married. The aftermath of the assault wormed its way into our relationship and spoiled our intimacy. I enjoyed kissing my husband face-to-face, but I sometimes recoiled when he tried to kiss me spontaneously on my neck and cheek. If I wasn’t expecting it, my body shut down. I would move away from him and ask, “What are you doing?”

If Kevin massaged my neck or hugged me from behind, I slipped out of his embrace and excused myself from the room. He could never hug me because I always said I was “in the middle of something,” or I needed to immediately leave the room to perform some very important task.

When my husband followed me into a closet or small enclosed space, I waited until he was close enough behind me so that I could dodge around him and leave. Trying to save face, I chastised him for following me. “Do you have to do that?” I yelled before storming out of the bedroom. It was as if I was filtering my husband’s presence through the trauma from my assault.

If I asked Kevin not to approach me from behind, he complied, but so often he forgot. I don’t fault him for this because, although his habits triggered me and he acknowledged this, they were an indelible part of our interactions as a couple in our home. It was impossible to control where he stood in relation to me every second of the day and still get things done.

The trauma lingered in our sex life, too. I had enjoyed sex with him on several occasions, but the discomfort lingered in the back of my mind. When I undressed, I struggled to meet Kevin’s gaze. His desire translated across time and space to become my attacker’s desire. His eyes transformed, too, and I wilted. Sex was no longer about pleasure. When naked, I felt exposed and unable to embrace my own ecstasy. I felt like I was being presented for a stranger’s consumption. There was a disconnect between what my husband and I were doing and what I was feeling. I had to work to enjoy sex. The more removed I became, the more I tightened the emotional noose that was asphyxiating our relationship. I felt guilty for initiating trysts and then stopping them or rejecting them completely. Kevin reassured me that I had complete control over the nature and pace of our sexual relationship, and we agreed to take intimacy as slowly as possible.

Two years into our marriage, I finally apologized to Kevin after shying away from a kiss on the back of my neck. The apology was borne from my embarrassment more than anything else. “I didn’t mean to do that,” I said. “It’s just a reaction. Sometimes I just….”

I didn’t want to, but I needed to. I had resisted mentioning the assault to anyone because I was ashamed that it happened. My father raised my sister and me with the mantra “don’t be a victim.” He taught countless impromptu self-defense lessons in the dining room where he asserted that I was too book-smart and lacked street smarts. His constant chiding implied I was too naïve to notice the sinister nature lurking within the real world. Despite honing my awareness under his vigilance, I was still assaulted. I was ashamed and believed I had failed. I was afraid to admit the assault to anyone — not even my dad.

There is too much shame surrounding sexual assault survivors. For every 1,000 sexual assaults, less than a quarter are reported, and the vast majority of attackers are never incarcerated or arrested, according to the Rape, Abuse & Incest National Network (RAINN). Once survivors admit their trauma, they can be criticized by family members and even the authority figures who they ask for help. The blame can be placed on victims and not the attackers. Friends and peers — and if the case is high-profile, the media — can scrutinize what victims wore, drank, ate, and their intentions, rather than placing the blame on those who destroyed their lives.

It took a few tries for me to discuss the assault with my husband. Our first conversation happened a week after I apologized. We sat down in our living room one night after dinner, and I talked and he listened. I wasn’t ready to go into specific detail about why Kevin’s touch bothered me, but I let him know that it wasn’t actually about him. I told him that I loved his affection, but that it sometimes caught me off guard and I always felt like I had lost control in the situation.

It was more difficult to talk about the assault. I was afraid that my husband would be turned off by my admission. I imagined an explosive reaction, but I later realized my assumption was less about my husband’s character and more about me projecting my father’s expectations onto him. Kevin and I had conversations about the assault over the course of several weeks. Again, I talked — often while clenching my teeth, gripping the couch cushions, and staring at the ground — while Kevin sat silently. It was only after I wrote an essay about it a year later to fully understand the assault’s nature and impact on my life. By finally admitting what happened and confronting the details of that night, I also began to process my past.

Once I admitted the trauma and its effects both to my husband and to myself, I began reclaiming control. Whenever I felt the urge to run away from my husband’s touch, I instead leaned into him and accepted that he was loving me and not hurting me. I addressed any fear or hesitancy when we were intimate and embraced the ability to stop when I was uncomfortable. I am still processing the residual effects of that night. Even as I write this, I find myself remembering forgotten details. These revelations do not stifle me like they once would have. Instead, I know that on the other side of them is the sexual freedom and intimacy I deserve in my marriage. And I am determined to have them.