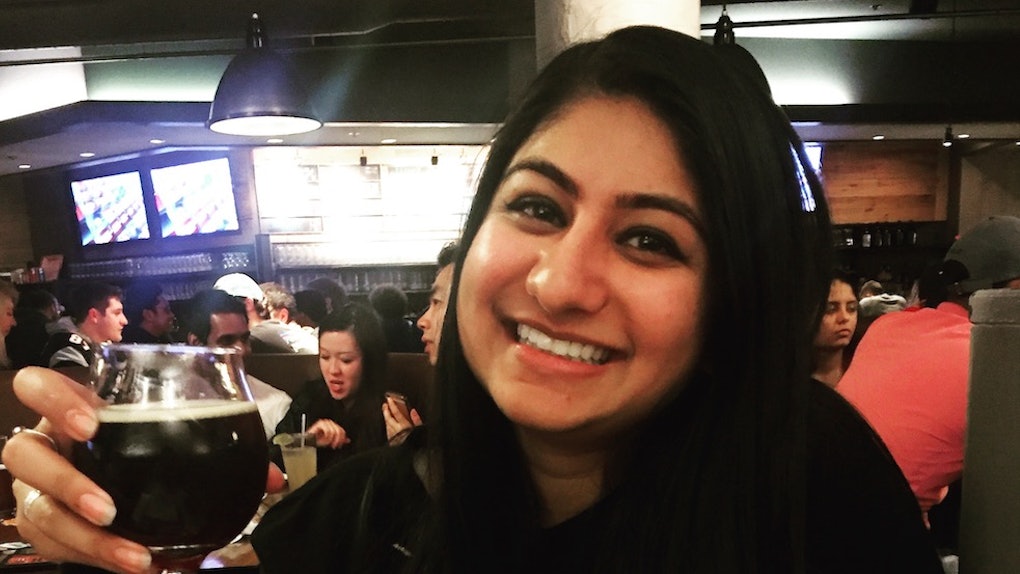 The last thing I wanted was for my mom to set me up on a date. But I haven't had luck on dating apps, and even though I constantly ask my friends to set me up, they've failed to find me a match. So I finally turned to the one woman I knew had been dying to set me up: my mother.

My mom is very social and loves to set people up. Despite the fact that she lives in my hometown in Wyoming and I live in Boston, she still sometimes finds guys she thinks I might like. In my family, it’s actually still common for people to have arranged marriages, and a number of my family and friends had arranged marriages and are happy. I’m not interested in marriage and I’ve been telling my parents that for about 10 years now. They always just laugh and say I’ll change my mind when I’m older, but I feel comfortable in saying that marriage isn’t in the books for me.

That doesn't mean I don't like to date, though. I was worried my mom wouldn't understand the type of person I would like — usually in my culture, a set-up means you’re working your way toward the altar. So I made my preferences clear: I wanted a date with someone who had grown up in America, like me, and wasn't looking to get married anytime soon.

In Indian culture, if you’re going to be set up, you need to have something called a Biodata. It's a one-page document that essentially serves as a dating profile. But instead of using Tinder, your mom emails it to her friends in hopes of finding a single son or daughter somewhere. The traditional Biodata consists of a number of your photos, alongside a small biography that includes your birthday, height, weight, occupation, education, hobbies and interests, and sometimes salary. It also includes similar information about both of your parents, because that is considered important to some families. My mom tried to get me to create a Biodata, but I didn’t want to make things seem too official in case anyone got any ideas about getting me married. I emailed her a list of my interests and called it a day.

The first three people my mom tried to set me up with didn’t even live in Boston. She found somebody in Tennessee, another in California, and a third person who knows where. I think my mom assumed we'd end up liking each other enough to get married. She's never dated in her life, and it became clear that I needed to be more specific about what I was looking for in this date. I explained she needed to find me somebody who lived in or near Boston. She took some time, but she finally came through for me.

My mom found someone working on a Master's degree in engineering in Boston. She sent me a photo and a short bio. When I asked for more info, she gave me his phone number with these instructions: “He’s finishing up with some tests right now, call him on Monday.”

His photo was cute. He was wearing a suit and he clearly needed a haircut, but I liked the way he wasn’t directly looking at the camera. My friends were able to find him online, where we discovered that he liked hiking and had published a number of papers in scientific journals. He seemed nerdy — my type — but I work in publishing and haven’t taken a math or science class since high school. What would we even talk about? Ultimately, though I was still on the fence about the whole set-up, my friends convinced me to give him a chance.

A few days later, I texted him, “Hey! This is Palak. My mom sent me your info. She said you’ve just finished up with midterms, would you be interested in getting drinks sometime soon?”

I waited an agonizing nine hours before he responded. He actually tried to call me first, but I just happened to be out with a friend, and I don’t like to be on my phone when I’m with people. He ended up texting me afterward: “Hey! I’m down!”

We quickly made plans to get drinks the next night (I don’t like to wait), and he chose a nice bar that I had been interested in going to in Cambridge.

I arrived at the bar early. I like to be the person waiting instead of the person looking when going out with somebody I’ve never met. Everyone told me that the date would be awkward because it was set up by our parents, but I chose to use that in our favor.

“How much did your mom tell you about me?” I started after introducing ourselves properly. “I think it’s best to address the elephant in the room.”

“I just had your photo,” he replied. “And then you texted me and I thought, why not? What do you know about me?”

I showed him the photo that my mom had sent me. “That’s an old photo,” he said, laughing.

We went through the motions of getting to know each other. It was overall a nice date, but ultimately I wasn’t that interested. There wasn’t any chemistry, and he tended to bring up his exes a lot. And while he was clearly intelligent, we didn’t really have much to talk about because he didn’t understand any of my pop culture references or have anything to say about my interests in reading, writing, and television. His sense of humor didn’t align with mine, and at times I had to explain jokes to him. He also said he worked nights in a lab, and slept all day, so he didn’t really have time to see people.

When I told my mom about the date a few days later, she seemed annoyed that I wasn't interested in him.

“You need to try harder,” she said, urging me to reach out to him once more. “Try again.”

I explained that there just wasn't any chemistry, but that confused her. "I don't know what that means," she said.

As much as I tried to explain that it wasn’t going to happen, she didn't seem to understand my point of view. In her eyes, the match worked. She saw two people who were single, 25, and well-educated — a stellar couple on paper. If I were from a family with more enthusiastic views on arranged marriage, my mom would have started wedding planning right then and there. To my parents, and many others who had arrangements, marriages are not necessarily about love: They're about finding a person to be your business partner in life. Love is never a priority, and your feelings on the matter don’t necessarily factor into the situation. If you happen to fall in love later in the relationship, then great. If not, then that shouldn’t break the relationship.

Growing up, I consumed romantic comedies like candy. I think dating is an important pre-cursor to any relationship, and that marriage doesn't have to be everyone's ultimate goal. I believe the most successful relationships are built on a strong foundation of mutual respect, and that is created over time.

To my mom, my “radical” views on relationships don’t make sense. I’ve never spoken to my mom about my dating life before I asked her to set me up, choosing to instead keep that part of my life separate from my parents. They never really went further than to ask if I was dating anyone. After I said no, they would move on. It always felt weird to talk about dating with my parents just because that was a thing they never experienced before they got married. It had the potential to open up doors to larger conversations about sex, love, and relationships that I didn’t particularly want to be having with them. (My parents believe partners shouldn't do more than hold hands before marriage.) I also had a slight fear that my parents wouldn't approve of my potential partners because they weren't Indian or Gujarati or doctors.

I've asked my mom to send me more potential set-ups, but she hasn't done it yet. I'm actually a little wary about trying it again — not because I think the date will be a dud, but because I'm concerned about how my relationship with my mom could change if I continue to reject her choices. I'm worried she'll see me as ungrateful.

But ultimately, I still want my mom to set me up. Even if the match doesn't work out, it'll mean talking on the phone with my mom more often. I can only hope that makes her happy.