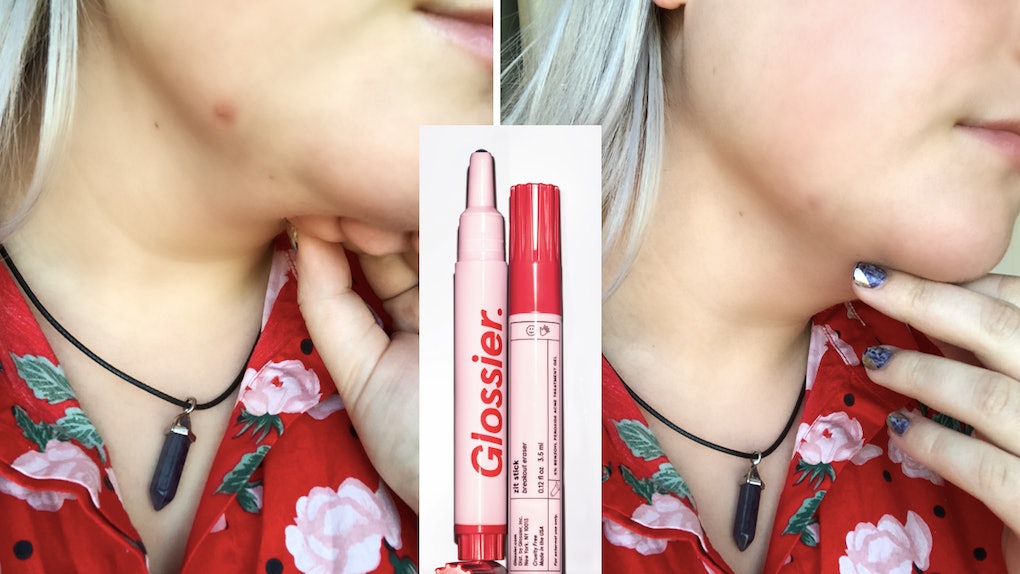 Hi, my name is Theresa, and when I get a zit, I Get A Zit. My skin is far from perfect on a good day, but I consider myself very blessed in the sense that I don't get too many pimples. Maybe it's genetics. Maybe it's because I'm obsessive about skincare since I'm prone to rosacea, and I'm not happy about it. But I will say that, when a blemish does make an appearance (because it definitely does!!!!), it hits my face like a pile of bricks. However, my review of Glossier's new Zit Stick proves that even mountain-adjacent pimples that pop up out of nowhere don't have to last for long.

Formulated with acne-fighting ingredients, like 5 percent benzoyl peroxide and capryloyl salicylic acid, and ingredients that calm and soothe irritated skin, like niacinamide and glycerin, the Zit Stick ($14, glossier.com) is an extremely easy-to-use, portable pen that can literally fit in your pocket (yes, even the disgrace that is most women's clothing pockets) for use anywhere... any time... even in the daylight. No, I'm not kidding.

While most spot treatments I've used for zits in the past are thick, white, and not to be seen by anyone else during daylight hours or so help me, God, the Zit Stick's formula goes on clear. I could smother my face in it on a particularly bad breakout day, and no one would know. (OK, people would probably know, and also, that's probably not a good idea anyway.)

Recently, I took Glossier's Zit Stick for a spin, as it landed in my office at exactly the right time. I had woken up in the morning, thinking everything was fine... that is, until I looked in the mirror, saw Kilimanjaro on my jawline, and realized everything was Not Fine. OK, OK, OK, I'm a dramatic baby. Everything was fine, and we are all perfectly great, beautiful humans, zits or no zits, but still, pimples can be painful and annoying AF.

Before we dive in to how the Zit Stick actually worked, just know the packaging is cute as heck. Colored pink and red, the pen literally mimics the feel of a marker you'd throw in your bag. The tip you use to apply the formula is a super hygienic stainless steal rollerball, and twisting the bottom red portion of the pen about three to six times pushes a bit of the formula onto the rollerball, providing the perfect amount of product every time.

Now, without further ado, here's what my pimple initially looked like:

After twisting the pen for a while initially (this is normal the first time you use it), a small bit of white cream appeared on the sides of the rollerball. I applied the rollerball directly to my zit, rolling the pen along the general area for a few seconds. Then, that was it. That's literally all you do. So, I sat back and waited for the magic to happen. And by "waited," I mean I checked on this damn blemish in the mirror on my desk every five minutes for the next few hours.

I did notice that even though the formula applies clear, you could still see the spot where I applied it juuuuuust a little, but perhaps that's because I was dead set on staring at this pimple until it went away.

According to the brand, as part of a clinical trial, researchers saw pimple size reduced in 83 percent of users. Six hours in, 80 percent of participants themselves reported that blemishes were less noticeable, less red, less swolen, and less painful than at the start. A full 24 hours later, and 80 percent of users reported that any swelling had been totally eliminated, pimples healed quicker than usual, and over half of their zits were gone completely.

As I painstakingly examined my pimple the entire day, I noticed slightly similar results. A couple hours after applying the formula directly to my mostly bare face (just a touch of moisturizer, because letting your skin breathe sometimes is Fun and Nice), I, too, noticed some swelling and redness had subsided. About halfway through the day, I also noticed that my pimple was coming to a head a lot fast than it has in the past, even when using other topical creams and spot treatments.

Glossier says it's totally fine to use the pen up to three times per day, so you best believe I whipped that baby out again mid-day and repeated my thorough examination process. (I'm low-key blaming Glossier for me not getting any work done, sorry not sorry.) By the end of the day, I could feel that my pimple was definitely less raised and less red. It didn't mysteriously disappear as I secretly hope for but knew wouldn't happy, as a small spot still remained on my jawline; however, the difference in size and feeling, for me at least, was completely noticeable:

Now, I'm not gonna send you off into the wild without all the information, so there are just a couple things to remember. First, the results I saw were on a single, not-that-bad (OK, FINE) pimple. Therefore, the results for someone dealing with more severe or cystic acne will likely differ. My skin also tends to react well to benzoyl peroxide. Second, please remember that benzoyl peroxide makes your skin sensitive to sunlight. Even though summer's ending soon, the sun's still out here, so take extra care when using this product, and don't forget your damn SPF, for the love of God.

Now, if you're itching to get your hands on this hypoallergenic, cruelty-free, vegan, gluten-free, derm-tested breakout eraser, you'll be able to before you know it. The Zit Stick officially becomes available to North American Glossier customers on Thursday, Sep. 6, at Glossier.com and will retail for $14.

More like this
This ONE/SIZE Turn Up The Base Foundation Powder Review Is A Must-Read
By Theresa Massony
Is Sephora Closed Due To Coronavirus? Here's How The Brand Is Responding To The Pandemic
By Theresa Massony
How To Get A Trendmood Box, AKA The Next Big Thing In Beauty Box Subscriptions
By Bella Gerard and Theresa Massony
Stay up to date