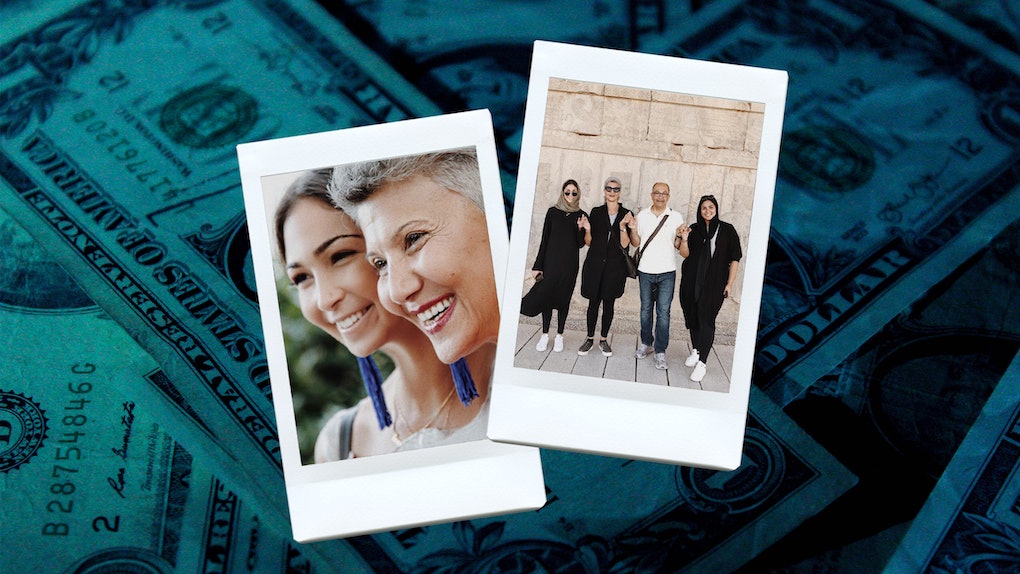 As a young girl, I often imagined what my 20s in New York City would look like. I could see myself strutting down Broome street with an iced coffee in hand, a cigarette loosely hanging from my lips (I've never been a smoker, but that's beside the point). I fantasized about lunching at Barney's on Madison, draped in faux fur, laughing a little too loudly at every joke my Italian lover made. I never would have guessed that turning 22 would mean moving back in with my parents and spending most of my weeknights sandwiched between them on our couch, watching CNN.

I always knew that I wanted to work with words. As an unathletic child who could barely count, I was truly relieved when I realized that I had a knack for language. I went on to study creative writing and music composition at university, where I was constantly reminded by my peers that my two chosen fields would not be highly lucrative. I waved off their comments with an air of ambivalence; they simply did not understand the concept of struggling for your art. But as graduation loomed and I prepared to enter the so-called "real world," armed only with my bachelor's degree, portfolio of writing clips, and acoustic guitar, their warnings suddenly began to ring true.

When I graduated, I had no real plan other than to follow my creative impulses — I would pursue a career in songwriting and tutor English to wealthy kids on the Upper East Side in order to put aside money. But this was a privileged decision, one that I could only afford to make by choosing to move back in with my 'rents. I am lucky to have been born and bred in New York City, to a family who has always been supportive of my artistic endeavors (my mother is an artist herself). They welcomed me back home with open arms and an open door, which I in turn walked through with hesitation. This would only be for a few months, I assured myself. I would save every penny I earned and move out of the house as quickly as possible.

Right? Wrong. Somehow, two months turned into two years. When I moved back in with my parents, I thought I would feel miserable — that the individualism I had manifested in college would be slowly stripped away, one "Where are U?" text at a time. I couldn't fathom what it would be like to pivot back to family dinners, to sneak my partner in and out of my childhood bedroom as if I were still in high school, or to have my mother remind me to "bring a sweater because it's chilly outside" every morning before work. But something even worse happened: I grew comfortable.

About three months into my pilgrimage home, I landed my dream job: an entry-level position at my favorite magazine. My work schedule quickly grew hectic: I was working late nights and early mornings. I began to look forward to coming home and chatting with my dad over a beer, or drinking a cup of coffee with my mom before heading to the office. Instead of reverting back to the helicopter-parent status that I remembered so fondly from high school, my parents acted as if they were my new roommates, giving me space when I needed it most. We fell into a routine, which additionally consisted of me spending several nights a week sleeping at my partner's apartment. I was shocked. Could it be? Were my parents and I actually becoming... friends?

The only time my new living scenario truly gave me pause was in professional settings. I never had to defend my decision to my friends: Many of my high school peers had also chosen to move back in with their parents after graduation, and my college chums understood the unbearable expenditure that is New York City rent; they didn't blame me for opting out. But as I grew more involved at my company, and struggled to combat the ever-present imposter syndrome I felt in the work space, having to admit that I still lived with my parents made me feel like a fraud. I was a child pretending to be an adult during a game of dress-up.

About a year in, I was wrapping up a job interview when a potential employer asked me where I lived. "Alone," I blurted out, without thinking. "On the Upper East Side. In a studio." As I walked away, I berated myself for my dishonesty. Why did I lie? Was I truly that ashamed to still be dependent on my parents? Perhaps I had grown too comfortable at home, and the guilt of that security had begun to weigh on my subconscious mind. This was one of many moments of reckoning I would come to have over the next few months — a series of revelations that ultimately culminated in my decision to move out.

The truth is, I was very good at coming up with reasons not to move. Cost was the largest factor: For the majority of my time spent at home, I simply couldn't afford to pay rent unless I moved far away from Manhattan. This was, of course, an option — in fact, many of my coworkers lived in Brooklyn and adored it! But my grandparents (who lived a couple doors down from me and played a huge part in my upbringing), had begun to struggle with their health. I knew that if I planned to see my family several times a week and continue attending the Sunday night dinners that had been a staple since my childhood, I had to remain relatively close by.

Convinced I couldn't afford the cost of living alone, my attention then turned towards finding the perfect roommate. Since I had missed the original post-graduation "roommate rush," it was difficult for me to source someone who I believed was compatible. Sure, I could live with a friend-of-a-friend, or a stranger from Craigslist — but why would I put myself through a potential roommate mishap when I could live at home for free? Excuse after excuse kept piling up in my head, until my mental mailbox was full.

Close to two years after moving back home, I had a game-changing realization: After putting money away from every paycheck and towards my savings, I could actually afford to rent a small space of my own. But my reaction to this information surprised me: I didn't feel relieved. Instead, I felt terrified. Perhaps the real reason I had been putting off moving out was fear: an intrinsic belief that I could not support myself or rely on my own independence.

Depending on others had come easily to me my entire life. I allowed my best friend in college to handle our rent payments without a second thought. Whenever I had a question about my taxes, I called my father before searching Google. Heck, I still text my sister photos of my outfits when I can't decide what to wear to work! An indecisive person by nature, I have always had trouble trusting my own judgment — a follower by choice, never a leader. Additionally, I have always struggled to sit alone with my self-doubt, choosing instead to surround myself with people who sometimes serve as distractions. Maybe what I really needed all along was a space to reconcile my own thoughts, to become reacquainted with my own conscience.

So, after two years of telling people I was "about to move out," of looking at apartments and finding problems with each and every one, of posting roommate callouts, of searching StreetEasy, and of texting brokers more than my own partner — I finally just did it. I found the apartment — a small studio in Lower East Manhattan — online during the winter "off-season," and went to see it on my own accord. I didn't tell my parents, my partner, or my coworkers; I didn't want to jinx it. In fact, I didn't even apply for the apartment until about a week before my move-in date. It didn't feel real, and I wanted to keep it that way so my brain wouldn't have time to panic. And it still didn't feel real as I signed the lease and packed up everything I owned into plastic slime-green boxes.

When I graduated from college, I thought moving back in with my parents would make me more immature — I pictured my mother doing my laundry and cleaning up after me, and my father lecturing me on America's political history and economics. I believed that living with my family would make me even more reliant on others. To my surprise, it pushed me to learn how to trust my instincts and claim the independence I so desperately sought out. Turns out, it was there within me, all along. It just took me a little while to discover it and develop enough confidence to reach out and grab it.

The moment I walked into my empty studio apartment for the very first time, I closed my eyes and listened to the silence. I smiled to myself — I was completely and utterly alone. I walked over to the window, the wooden floorboards creaking beneath my feet. I pulled a framed photograph of my family out my purse and gently placed it on the windowsill. Perfect, I thought to myself. Then, I rolled up my sleeves and got to work.