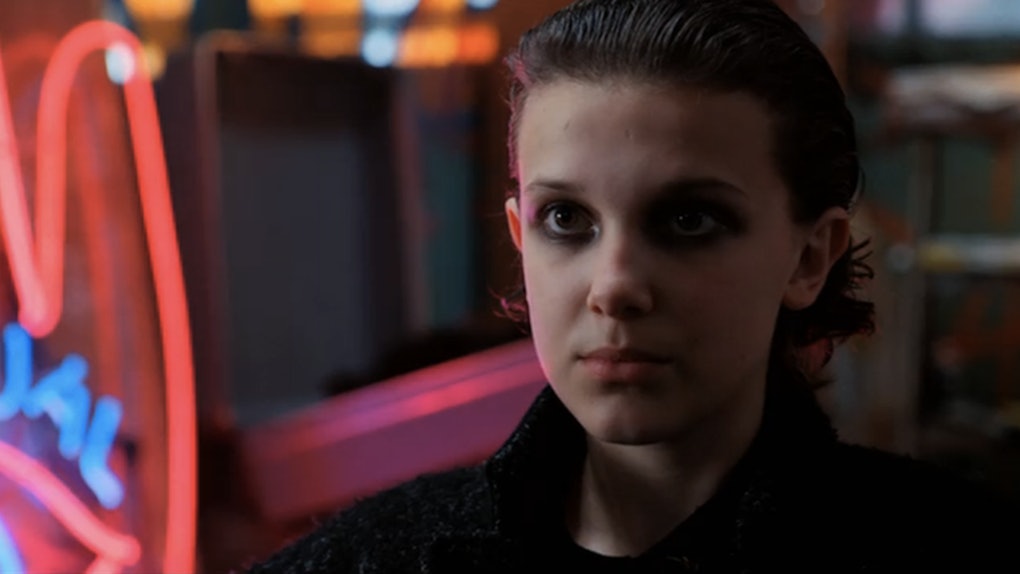 Millie Bobby Brown's Kardashian Impression Is So Good, Kris Jenner Posted About It

Stranger Things is the newest show to get the obsessive fan treatment since becoming a sleeper hit last summer when Season 1 arrived on Netflix in July. But while fans obsess over Dustin, Steve Harrington, and of course Millie Bobby Brown's character Eleven, what are the actors who play them obsessing over? You think MBB is hanging out at home watching Netflix? Of course not. Like any 13-year-old, she's completely obsessed with the Kardashians. And Millie Bobby Brown's Kardashian impression turned out to be so good, it even impressed the clan's matriarch, Kris Jenner.

Keeping Up With The Kardashians has always been skewed towards a younger audience, even when it first premiered back in 2007. Before Game of Thrones came along, it held the title from 2007-2010 as the most watched program on Sunday nights for adults 18–34; 2009-2010 was the show's peak, year, with 4.8 million viewers for the finale of season premieres in the fall and spring. (That was the point where Khloé married Lamar Odom.) But even with the decline in the past few years, it still holds serious sway with the most coveted demographics.

So it's not surprising that Brown finds this program so fascinating. After all, it's geared towards those who are just a touch older than she is, and as we've seen on the red carpet, Brown is one who is most eager to present herself as a grown up.

The full segment on Brown's fascination with the show, and the Kardashians themselves, was part of a larger interview this past week on The Tonight Show With Jimmy Fallon. She even does a bit of an intimation of the girls and their "special language," as she terms it, including that weird chirping noise they make at each other.

Well, this sort of endorsement didn't pass unnoticed by Kris Jenner. She has spent these last 10 plus years cashing in on the fame of daughter Kim, and turning what Joel McHale on The Soup used to refer crassly as having "a big @-- and a sex tape" into an entire media empire that has made their family millionaires several times over.

She must have a media alert on the phone that goes off whenever anyone mentions them anywhere, because she was quick to get this endorsement up on their Instagram account. Any tie in to the show with the biggest hashtag on Twitter this side of Game of Thrones was far too good to pass up.

In her caption she wrote:

I love you @milliebobbybrown, you are so adorable! Thanks for watching #KUWTK! We are huge fans of yours also!! @strangerthingstv#StrangerThings@jimmyfallon #JimmyFallon@fallontonight#Okurrr

Well of course they are. Everyone in Hollywood is a fan of Stranger Things if they know what's good for them.

And just to make sure she saw it, Kim was right on it less than an hour later with the RT.

At that point, Brown did notice and started tweeting back in total fangirl style.

Will we see this love fest carry over to the next major red carpet both the Kardashians and Brown share? Time will tell, but I'm sure if Jenner can figure out how to work this into KUWK Season 15, she'll be all over it.

More like this
Millie Bobby Brown's Quotes About Growing Up In The Public Eye Are So Real
By Brandy Robidoux
Here's The Kardashian-Jenner You're Most Like, Based On Your Love Life
By Candice Jalili
Travis Barker's Instagram About Sex With Kourtney Kardashian Will Make You Blush
By Candice Jalili
Stay up to date