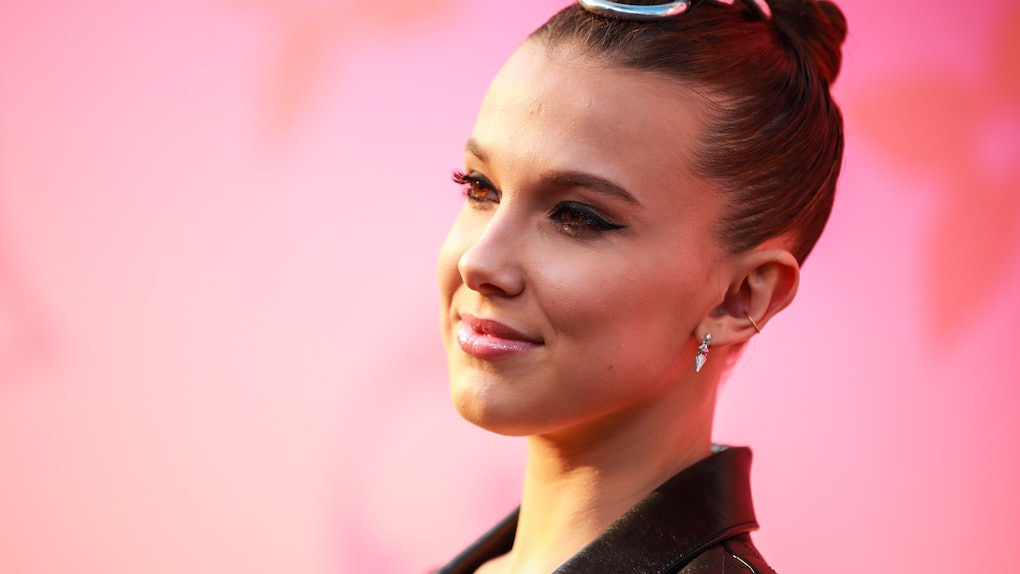 Pretty soon, Stranger Things won't be the only Netflix home for one of its young stars. Millie Bobby Brown is developing a Netflix movie called A Time Lost with her sister, and it sounds like everything fans could hope for. The movie is based on a story Millie and her older sister Paige Brown came up with together. According to The Hollywood Reporter, the story follows "a long-standing feud between two Long Island families that comes to a head when one of their teenage daughters is diagnosed with cancer." Though no casting announcements have been made as of Sept. 10, the Brown sisters are set to produce. Per THR, they released a statement saying:

We are so grateful to Netflix for their confidence in us and this beautiful story, which we have spent years writing and developing. It's about friendship, family and overcoming obstacles when it feels like the world is pushing you down. It's been a labor of love, literally.

Screenwriter Anna Klassen will write the script for the already-buzzy film, and based on her Twitter, she's pretty excited about it. She tweeted the announcement of the movie and wrote:

Obviously, Millie is no stranger to the Netflix family, thanks to her breakout role as Eleven on Stranger Things. The 15-year-old actor became a household name after the hit series' premiere in 2016, and the spooky sci-fi show recently came out with a super popular third season in July, which further solidified Millie's place as Netflix royalty. The streaming service's vice president of independent film and documentary features, Lisa Nishimura, said of the new project:

Millie is an extraordinary creative talent. We've been lucky to have her in our family from the beginning of her career. It is a genuine thrill to witness Millie bring her distinct vision to the screen, now as a writer and producer, alongside her sister on this wonderful film.

There's no word yet on when A Time Lost will be released, but Millie has some other projects in the works that will likely come before it. She is set to star in and produce Enola Holmes, a movie about the little sister of the famous fictional detective Sherlock Holmes. It's set to premiere some time in 2020, so fans can look out for that project soon.

With her talent and track record, there are likely many types of projects in Millie's future. In an interview with Refinery29, she said there are a few genres she'd love to get to try out at some point:

I haven't been part of a romance. I obviously have a romantic interest in Stranger Things, but not like an actual romantic movie. I haven't ever done a comedy. [I want to try] things like that.

I doesn't sound like there will be much comedy in A Time Lost, so hopefully Millie will have the opportunity to work her funny bone in another project soon. In the meantime, fans can look forward to her collaboration with her sister hitting Netflix at some point down the line.