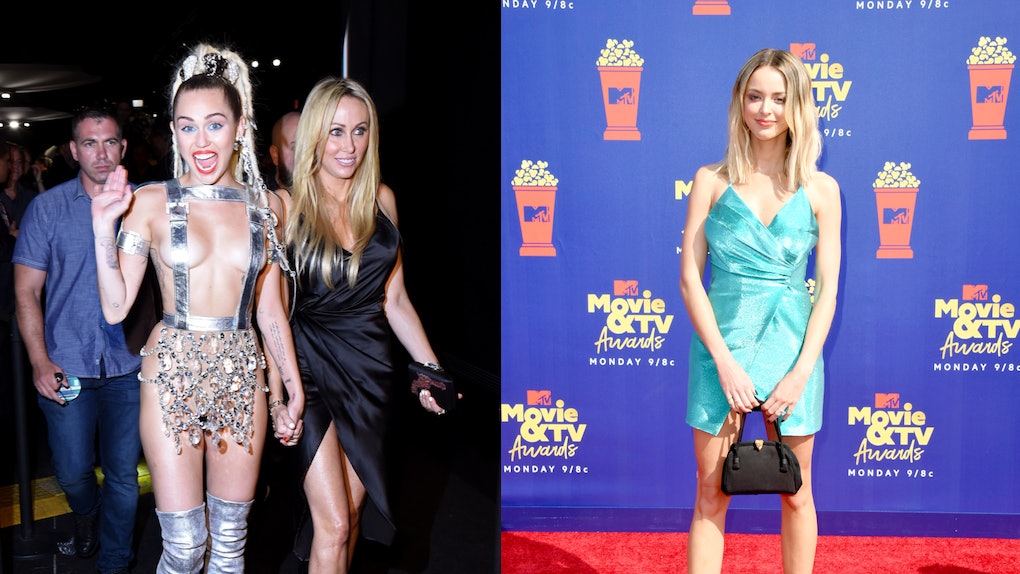 Miley & Tish Cyrus Hung Out With Kaitlynn Carter, So What's Going On There?

If you thought you were fully caught up on all of the recent Miley-Liam-Kaitlynn-Brody drama, think again. TMZ reports that Miley and Tish Cyrus hung out with Kaitlynn Carter on Saturday, Aug. 17, exactly a week after Kaitlynn and Miley were reportedly spotted making out in Italy.

According to TMZ, Miley was pictured riding shotgun while her mom drove her and Kaitlynn, who was seated in the backseat, to a restaurant in West Hollywood. TMZ reported that the three entered the restaurant together, but they weren't able to get a picture of them together because the younger Cyrus was reportedly being covered with a jacket by her security team.

While they weren't able to get pictures of Miley entering the West Hollywood restaurant, the paparazzi did manage to capture a video of Kaitlynn and Tish filing into the restaurant behind the covered person (who was reportedly Miley).

OK, so this is obviously a pretty big deal as far as how serious Miley and Kaitlynn are. I mean, well, let me back track for a second. To be totally fair, I don't know Miley's relationship with Tish. Maybe she just introduces everyone to her mom. But, for most people, introducing someone you were just on a European vacation with to your mom is usually a big deal.

And Kaitlynn has a pretty great track records with moms. Kaitlynn's ex Brody Jenner's mom Linda Thompson made headlines on Aug. 15 when she took to Instagram to address rumors that she had "shaded" Kaitlynn by "liking" a comment that said her son's ex just wanted attention. In response to her haters, Thompson posted an image of text on Instagram that read:

Please don't judge people. You don't know what it took someone to get out of bed, look and feel presentable as possible and face the day. You never truly know the daily struggle of others.

Kaitlynn commented on the image, "EXACTLY," to which Thompson replied, "and for the record honey, the only ‘shade’ I throw is my own shadow walking away from drama. You know I love you. I always have & always will.”

Brody also took a page out of his mom's book and posted a long screenshot of text on Instagram on Aug. 17 shutting down any and all haters. The post read:

There is far too much negativity being directed at someone who I love and care about very much. I feel the need to set the story straight. Kaitlynn and I have been best friends for 6 years, and we continue to be. We, like many others before us and many after us, grew in different directions over those same 6 years. Kaitlynn is a wonderful person, beautiful and fun to be with, always a positive force in my life. We decided the best move for both of us was to keep our love for each other strong but move forward separately with our lives. I respect Kaitlynn and care deeply about her. She deserves to be able to move forward in her life with respect and happiness.

A rep for Miley first announced her split from Liam on Aug. 10, the same day that Entertainment Tonight shared the pictures of her and Kaitlynn reportedly making out.

"Liam and Miley have agreed to separate at this time. Ever-evolving, changing as partners and individuals, they have decided this is what’s best while they both focus on themselves and careers," the rep told People. "They still remain dedicated parents to all of their animals they share while lovingly taking this time apart. Please respect their process and privacy."

Three days later, on Aug. 13, Liam took to Instagram to confirm things on his end. He posted the picture of a beautiful sunset along with this caption:

While it's unclear if Miley and Kaitlynn's relationship will continue to evolve, it seems as if all parties want to move on from the speculation surrounding the breakups.