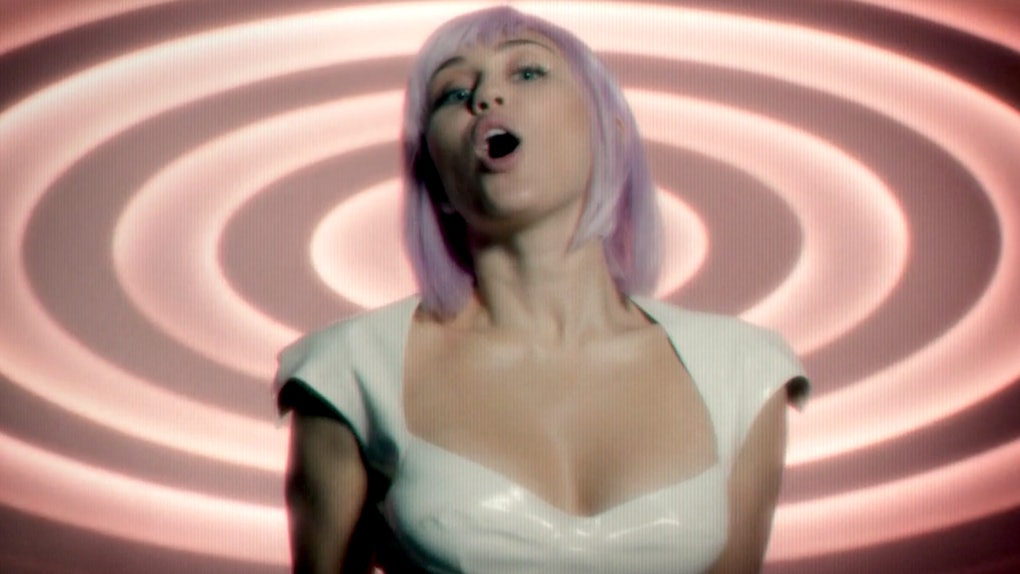 Miley Cyrus' Songs In 'Black Mirror' Are A Full Mood

Miley Cyrus' twisted episode of Black Mirror about a pop star in distress may be dark, but it is also full of some catchy, brand-new songs from Cyrus. The new episode stars Cyrus as purple-wigged pop star Ashley O, who seems to lead a perfect life to all the teen girls who look up to her, but it is an entirely different story behind closed doors. And along with the thrilling story of the new episode, Miley Cyrus' songs in Black Mirror are a surprise treat for all of Cyrus' music fans who watched.

The new Black Mirror Season 5 episode "Rachel, Jack and Ashley Too" should feel somewhat familiar to Miley Cyrus fans at first. Just like her most famous television role of Hannah Montana, Ashley O puts on a wig to become a famous pop star but leads a much different personal life away from the stage. Both fictional pop stars also deal in bright, inspiring pop music, and Ashley O's smash single "On a Roll" seems like it would fit in perfectly with Hannah Montana's long list of cheery hits.

"On a Roll" is introduced right at the very beginning of the episode, as Ashley's superfan Rachel replays the music video over and over again. It is the most prominently featured song in the episode, and become emblematic of Ashley O's mass-produced positivity, as she sings about the importance of ambition. But the songs get less positive as the story goes on.

To express her discontent with her controlling aunt/manager and the pressures of her fame, Ashley sings a short snippet of a grungier new song about being an animal in a cage. The song segment takes on a new life when [spoiler alert] Ashley ends up in a coma and her aunt uses technology to extract music from her brain. We still never get to hear much of this song, but it definitely feels reminiscent of Miley Cyrus' Disney kiss-off single "Can't Be Tamed."

And finally, after Ashley O exposes her aunt and is free to make the music she wants, the former pop star goes full rock for the episode's end-credits song, "God Money."

Ashley dedicates the almost screamo metal song to her terrible aunt, wailing about people who worship money like a god and would do anything for it. The track also references the chorus of Ashley's big hit "On a Roll," changing the lyrics "Hey, I'm a ho / I'm on a roll" to the rhyming "Head like a whole / Black like your soul."

Interestingly enough, the three songs in the episode also seem to track Miley Cyrus' own musical progression, with "On a Roll" representing her Hannah Montana days, the animal in a cage song bringing to mind her early solo work after breaking with Disney, and finally, the heavy rock influence of "God Money" reflects the style that Cyrus is currently embracing in her album She Is Coming, which was released just a few days before Black Mirror Season 5 premiered.

More like this
I Tried Singing While Running Like Miley Cyrus & OMG, My Lungs
By Rachel Varina
Who Is Cleo On 'Outer Banks'? Carlacia Grant Is New To Season 2
By Ani Bundel
Shonda Rhimes' Quote About Regé-Jean Page Leaving 'Bridgerton' Is SO Shonda
By Rachel Varina
Stay up to date