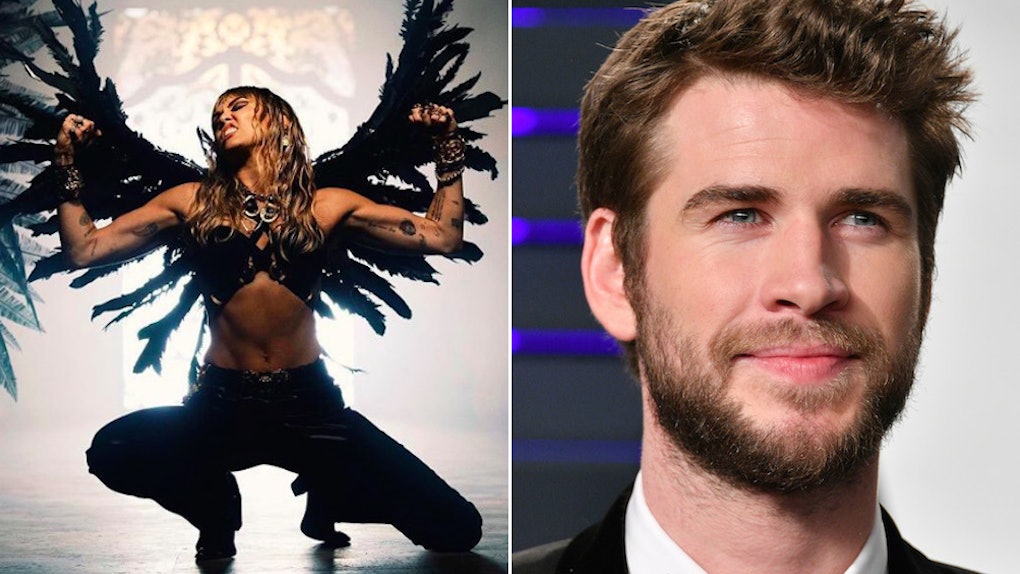 Miley Cyrus Shaded Liam Hemsworth In "Don't Call Me Angel," According To Fans

Don't call them angel. They don't want to hear it! Ariana Grande, Miley Cyrus, and Lana Del Rey dropped their single for the Charlie's Angels soundtrack on Friday, Sept. 13, and based on the lyrical content and what's going down in the video during Cyrus' verse, fans are convinced Miley Cyrus shaded Liam Hemsworth in "Don't Call Me Angel."

The video is visually stunning, with the three pop stars turning looks in their dark angel 'fits. Fans of the singers are living for the song and video, but there are quite a few who think the song is kind of annoying. Just about everyone thinks the video knocked it out of the park, though. The moment some people can't stop talking about, however, is Cyrus' verse.

The "Slide Away" singer has the first verse of the song, which comes in after Grande sings the song's chorus as the intro.

In her verse, Cyrus sings,

Then she sings her own pre-chorus.

Do I really need to say it? / Do I need to say it again, yeah? / You better stop the sweet talk / And keep your pretty mouth shut

In the video, Cyrus is going full PG-13 "I've Got Nerve," standing in a boxing ring and making sure the guy tied to a chair in the ring knows his place. It's some serious energy. Hannah Montana, but make her dark. I live, honey.

But some fans think the guy tied to the chair looks a bit like Hemsworth. And it doesn't help that Hemsworth frequently referred to Cyrus as his "little angel" in his Instagram captions while they were together. Hemsworth calls Cyrus "angel," Cyrus makes a song called "Don't Call Me Angel." It's as clear of a parallel as one can get, but I'm not convinced Cyrus was intentionally shading her ex-husband in this.

You can check out the video here.

Here's what fans are saying about the possible Hemsworth shade.

Hemsworth really did call Cyrus an angel a lot.

In a birthday Instagram for Cyrus in 2016, Hemsworth called Cyrus his "favorite little angel."

In a selfie he posted in July 2017, he called her angel again.

And during Christmastime in 2017, he called her a "Christmas angel."

There are admittedly a lot of receipts to bolster the argument that Cyrus is shading Hemsworth in this music video.

While it's definitely fair to point out the parallel here, saying the reason Cyrus and Hemsworth split is because he called her "angel" too much is the stretch of the century. They were together for 10 years, y'all. Let's not minimize their relationship by theorizing it was ended by a nickname.

More like this
I Tried Singing While Running Like Miley Cyrus & OMG, My Lungs
By Rachel Varina
With 'Like Water,' Wendy Found Her Biggest Cheerleaders In Her Red Velvet Bandmates
By Michele Mendez
Taylor Swift's 'Fearless (Taylor's Version)' Lyric Changes Are Small, But Meaningful
By Michele Mendez
Stay up to date