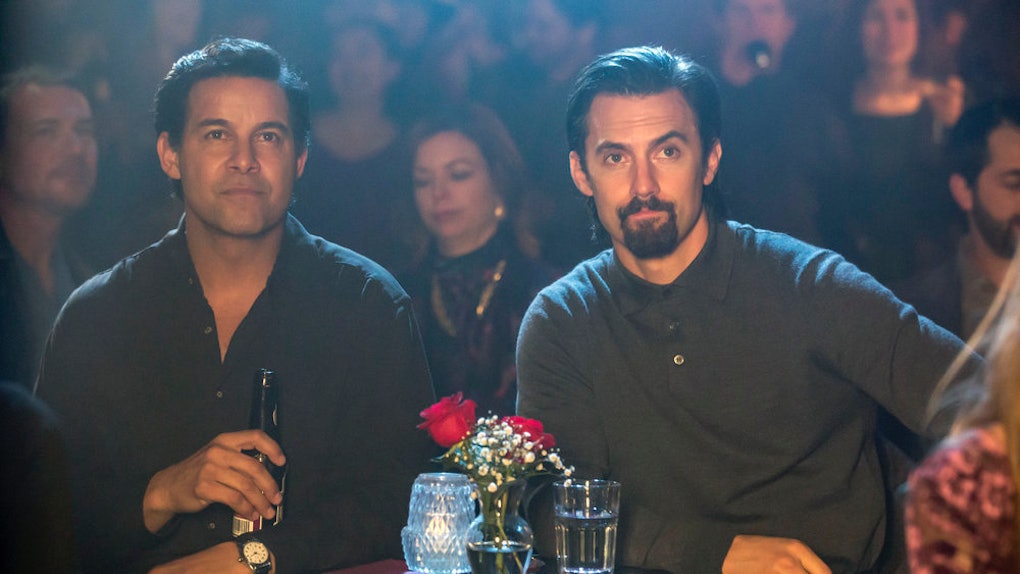 This week's episode of This Is Us was one of the most fascinating so far, and that's saying something. So far, the show has worked by being split into three sections. I joke to people that may favorite show is This Is Randall followed by This Was Us and that I would fastforward through the This Is Kevin & Kate parts if I could. But this week was different and it was due to our glimpse into Miguel and Rebecca's story.

The flashbacks to the past were nice and all, and they did a great job framing out Kevin's view of the world, which in other episodes might have looked like the spoiled Number One alpha child talking. (Especially because leading up to this week the show enforced that Kate and Randall were Numbers 2 and 3 to Kevin's Number 1 in the last three episodes.)

But the real heart of this week's episode was in the present, which isn't always the case. It showed the high walls of our main characters, while breaking down the walls between the three different shows. On the one side, you had the Big Three and Rebecca in one room, and in the other... you had what was almost a crossover episode of the supporting characters.

Beth, Toby, and Miguel sat down and started day drinking at a bar. It was a little like when Karen, Trish, Misty, and Colleen all got together and hung out on The Defenders – the sidekicks, mad about their status. Beth and Toby resentful as anything they're not on the inside. Toby compared it to being in Star Wars, but not a Skywalker. I suppose that makes him Chewbacca, Beth Admiral Holdo and Miguel... Wedge?

Miguel disagrees. He's a Red Leader that's standing by with no name. Beth and Toby try and tell him differently, but no, he will not be moved. And while they complain bitterly about the "Jack No-Fly Zone" he reminds them that's his No-Fly Zone, too.

Beth and Toby are of the next generation, remember. But Miguel, he was there. He was on the outside before the trauma that made the Pearsons so insular. And he knows why they are the way they are. It's different for him.

I married my best friend's wife.

Miguel and Rebecca's marriage is sort of the overlooked relationship of the group that way. But as he points out, it's always there. He was Jack's best friend. He took Jack in when Jack was at his lowest point. He was by Jack's side until the man died. And then....

The bible says to never to covet your best friend's wife. He coveted her, or at least he must have at some level. Because he came back over a decade later (sliding into those Facebook DMs before the phrase was even a thing) and took her for his own.

The kids try not to think about it. And it wasn't like it was like they got married in 1998 or anything. By the time Miguel came back into the picture, Kate and Kevin were long gone and moved away. Rebecca was left behind with only Randall. And Randall and Beth had just had their first kid and didn't need her anymore either. Miguel's timing just happened to be perfect.

But he knew he would always be on the outside of the Pearson clan when he married her. And he did it anyway. Because he's older and wiser than Beth and Toby. He knows sometimes the past is a place you can't go with people. And he's willing to take what happiness and joy Rebecca can offer, and be content.