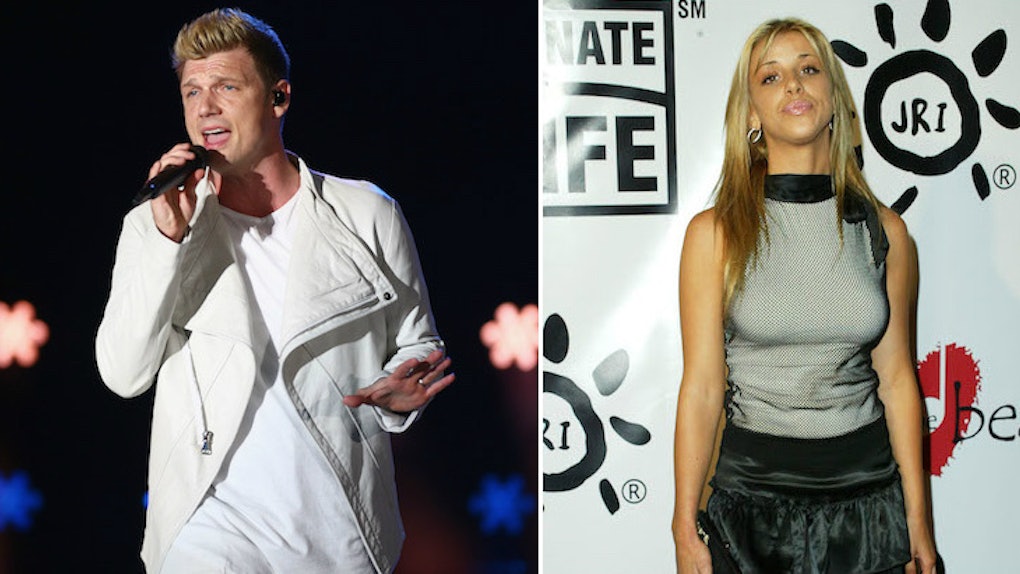 The climate in Hollywood now is tense. Another woman has come forward to speak out about an alleged sexual assault. This time, the accusation is directed at Nick Carter. Melissa Schuman of the pop girl group DREAM has blogged about an incident that she claims happened between her and Carter when she was just 18. In the post, Melissa Schuman accuses Nick Carter of sexual assault.

UPDATE: Nick Carter has responded to the accusations made against him by Melissa Schuman. In a statement to Elite Daily, Carter says, "I am shocked and saddened by Ms. Schuman’s accusations. Melissa never expressed to me while we were together or at any time since that anything we did was not consensual. We went on to record a song and perform together, and I was always respectful and supportive of Melissa both personally and professionally. This is the first that I am hearing about these accusations, nearly two decades later. It is contrary to my nature and everything I hold dear to intentionally cause someone discomfort or harm.”

EARLIER: Elite Daily reached out to Nick Carter's team, but did not hear back by the time of publication.

Schuman details the alleged incident in graphic detail on her blog, Melissa Explains It All. She starts by recounting what she claims happened the first time the two met. She claims it was a phone call orchestrated by their label reps. At the time, Schuman had a boyfriend, but took the phone call out of politeness. She says about the alleged phone call,

I took the phone call. He was very polite and the conversation was quick.

A few years later, Schuman claims the two began acting in a made for television movie together:

I was no longer in a relationship and now single. My first impression of him, he was kind and charismatic so when he asked if I’d like to hang out with him and his friend at his Santa Monica apartment on our off day of shooting, I said yes. I invited my roommate to come with me.

Schuman then goes into detail about Carter's apartment on the day of her alleged visit. She claims the apartment was pretty bare and didn't have much furniture. She claims Carter provided alcohol, but mentioned, "this wasn’t a crazy house party, just a casual hangout."

Caution: Schuman's details below about the alleged incident are graphic. She claims,

Soon after, he asked me if I would like to come into his office and listen to some new music he was working on. I agreed and was eager to hear his new music.

While listening to music in the office, Schuman claims,

And naturally we started to kiss. He was aware that I was a virgin and that I held to religious conservative christian values. I was vocal about this. Everyone knew about this, including those who repped me.

After kissing for a moment, he took my hand and brought me into the bathroom adjacent to his office. He shut the door and we continued to kiss. I asked him what we were doing in there. He didn’t respond and continued to kiss me. He then pick me up, put me on the bathroom counter and started to unbutton my pants. I told him I didn’t want to go any further. He didn’t listen. He didn’t care. He told me, “don’t worry. I won’t tell anybody.” I told him thats not why I didn’t want to do it.

From there, Schuman alleges that Carter started performing oral sex on her. She claims, "I remember thinking at that point that maybe after this he will just stop, but he didn’t." Schuman went on to say,

Someone in the house knocked on the bathroom door. So he took me into the other bathroom to pick up where he left off. He then took off his pants. I will never forget this moment. There was a bathroom nightlight so although it was dark, it was dimly lit enough for me to see myself in the bathroom mirror. He sat himself on the bathroom counter and asked me to perform oral sex on him. I declined, he was upset. He told me, “I did it for you and it’s only right you do it for me.”

I felt scared and trapped. He was visually and clearly growing very angry and impatient with me. I couldn’t leave. It was evident to me, that i couldn’t leave. He was stronger and much bigger than me, and there was no way I would be able to open that door or have anyone help me. My friend couldn’t help me, I didn’t even know where she was. So when he placed my hand on his penis my thought was the only way to get out was to get him to finish what he had started. That’s where I saw myself, my reflection, watching myself do something that I was sicken by. Watching myself be assaulted, forced to engage in an act against my will.

He was relentless, refusing to take my no’s for an answer. He was heavy, too heavy to get out from under him. Then I felt it, he put something inside of me. I asked him what it was and he whispered in my ear once more, “it’s all me baby.”

After the alleged incident, Schuman says she did not tell anyone what happened. She alleges that Carter tried to get in touch with her for weeks. She claims, "He jammed my phone with calls for weeks, leaving me messages demanding I speak with him. Then he finally left me one last nasty, angry message and he never called me again."

As far as pursuing any legal action against the alleged incident, Schuman claims she made an attempt. She said,

A short amount of time passed after the incident, I confided in my then manager, Nils Larsen, that I wanted to come forward. He heard me out and said he would do some investigation and would try to find me a good attorney as I intended to press charges. He later informed me that my abuser, who’s name I will disclose later in this article, had the most powerful litigator in the country.

He was right. I didn’t have the money, the clout or access to an attorney who was powerful enough to stand up against my abuser’s legal counsel. I was told I would likely be buried in humiliation, accused of being fame hungry, and it would ultimately hurt me professionally as well as publicly.

A year after the alleged assault, Schuman ended up signing with Carter's manager and close friend, Kenneth Crear. Although she claims she was able to avoid Carter, eventually the two ended up doing a duet together. Schuman says,

I tried to justify that maybe something good to come out of something very bad. Maybe this song might help me get signed as a solo artist and I could move on and put everything behind me. Kenneth asked my abuser if he would be willing to sing the duet with me live at my showcase and he agreed.

Before going on stage together, Schuman claims she and Carter, "stood next to each other in awkward silence." She continued, "He was irritated with my lack of warm welcome and appreciation for the favor he was doing for me."

Schuman claims after the duet, she received positive reviews from the label. However, weeks passed and she reportedly hadn't heard back from Crear. She claims,

When we finally spoke, I was surprised to hear the feedback from the same label head I had spoke to before. Dead pan, I was told, 'He isn’t interested in signing you. He told me your vocals were weak in the duet and that he was interested in the song only. Nick will be moving forward with the song elsewhere.' I asked my manager what the game plan was next and he reluctantly said, 'Maybe another showcase. I don’t know.' I could tell by his tone that he was no longer interested in working for me and I couldn’t help but wonder if Nick had any influence in it.

After that, Schuman says, "I never did another showcase again after that and I quickly lost interest in pursuing a career as a recording artist."

After all these alleged incidents came to a head, Schuman states that she told her family and friends about what happened. She claims she wasn't interested in taking these alleged reports any further until she saw another alleged victim come forward about Carter and receive backlash about the reports on RadarOnline. It was the hate and backlash this anonymous woman received that inspired Schuman to create this blog post.

Nick Carter has not yet responded to Schuman's alleged assault claims.