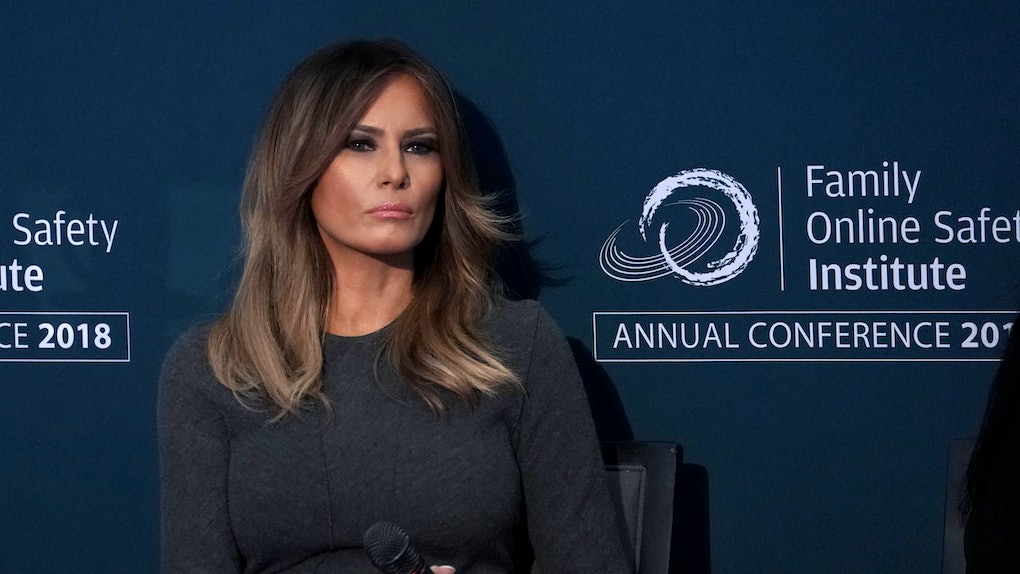 The Trumps are really the meme machines that keep on giving. On Nov. 26, Melania Trump unveiled her Christmas decorations at the White House, which included, uh, bright red trees and other interesting design choices — and, like always, the internet had a lot to say about it. But there will be no decoration-shaming tolerated, at least not by the first lady, because Melania Trump's comments on her Christmas decorations are standing by the designs.

According to The Daily Mail, Trump addressed the criticism of her decorations on Wednesday, Nov. 28 during an appearance at Liberty University. Despite the vitriol, she told the audience that she thinks her Christmas decorations look great. "We are 21st century and everybody has a different taste. I think they look fantastic," she said, adding, "In real life they look more beautiful and you’re all very welcome to visit the White House, the people’s house." See, you just have to see them up close for the full effect. (No? OK.)

This year, the White House's Christmas decoration theme is "American Treasures” in order to "[honor] the heart and spirit of the American people," according to a statement from the White House. But the way Trump and White House staffers chose to deck the halls wasn't well-received online. A video that Trump shared to Twitter on Monday, showing blood red trees lined up throughout the hallways of the White House that quickly drew comparisons to the dresses women wore in The Handmaid's Tales and the blood that pours down the hallway in the cult classic The Shining.

In other areas, the house is adorned with shrubs, glitter, and lights of starker colors, from bright blues to dark greens, which channel Halloween more than Christmas, according to some Twitter users. A lot of people had flashbacks to her 2017 decorations, which many felt fell more into the "nightmare" category than the "Christmas" one.

Oh, and Trump also has custom-made ornaments, a pencil wreath, and other trinkets up around the White House. They're decorated with her "Be Best" slogan from her anti-bullying initiative. But Twitter users think the overall decorations could be better. In fact, The Washington Post dedicated an entire article to criticizing the designs, and Slate questioned, “What message is Melania Trump sending with her red Christmas trees of death?” Oof. Elite Daily reached out to the office of the first lady for any comment or response at the time, but did not hear back.

It wasn't all bad, though. According to the White House statement, the East Wing features decorations in honor of U.S. military troops and their families "who have sacrificed greatly to protect our freedoms." The State Dining Room celebrates America's national symbols, including the bald eagle, the rose, and the oak tree. And the East Wing features fun replicas of skylines across the country, including those in New York City, Chicago, and San Francisco.

Here's a look at some of the designs:

Maybe it's a little busy, but like Trump said, it might look better in person. Throughout December, the White House is hosting public tours, so maybe check it out for yourself. You never know — you might end up liking them.