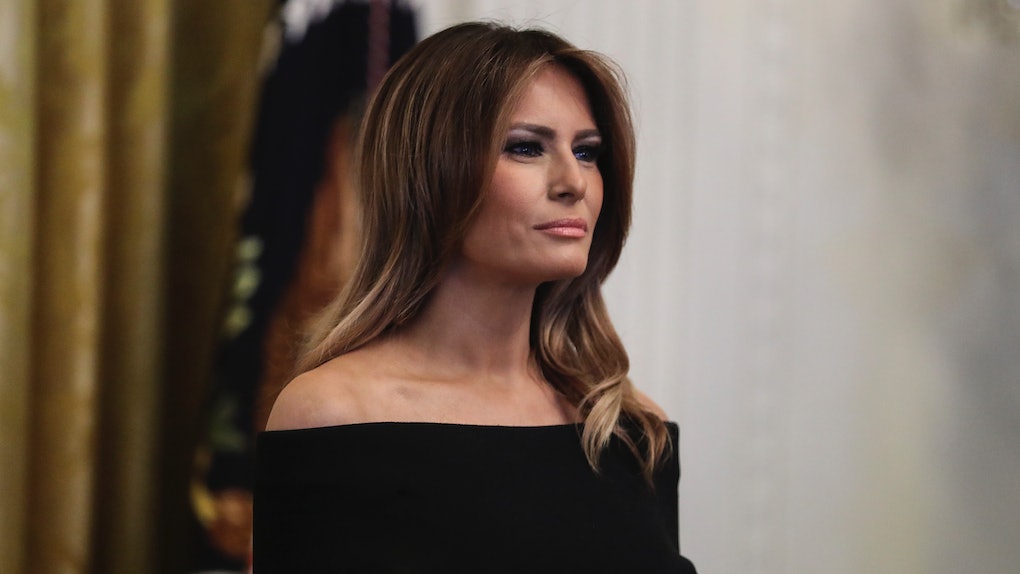 Melania Trump Slammed "Opportunists" For Talking About Her, Which Isn't How This Works

It's 2018 and everywhere you look is the Trump name. It's on Twitter, in the papers, on the news, in comedy sets, and late-night sketches. While the big, gold lettering plastered on buildings throughout New York City might indicate that the Trump family likes seeing their name pop up, that might not be the case when it comes to the first lady. Melania Trump slammed "opportunists" for talking about her, which is, uh, not how this works.

Despite being in the first family, Trump apparently doesn't like people using her name or the Trump name. Fox News' Sean Hannity caught up with the first lady during her tour of the U.S.S. George H.W. Bush on Dec. 12, and when he asked what's been the "hardest" part of her role, the first lady took the chance to weigh in on the "opportunists" who are using her name "to advance themselves." Elite Daily reached out to representatives of the first lady for comment, but did not immediately hear back. Trump said,

I would say the opportunists who are using my name or my family name to advance themselves, from comedians to journalists to performers, book writers.

Trump said that it doesn't "hurt" necessarily, but rather "the problem is they’re writing the history and it’s not correct.” The first lady believes that these "opportunists" like to focus on the "gossip" and she'd prefer they focus on the "substance and what [they] do. Not just about nonsense," she told Hannity, although she didn't give examples. Her spokesperson Stephanie Grisham told Elite Daily by email that the first lady's comments "speak for themselves."

It's totally understandable that she doesn't want people criticizing her loved ones. Except, as the first lady, Trump and her family doesn't have the luxury of remaining out of the spotlight — good or bad. Trump's predecessor, Michelle Obama, knew very well being the first family puts you in the public eye, and that what comes with that isn't always pleasant. In fact, she's been open that those concerns made her uneasy with her husband President Barack Obama's decision to run. According to CNN, at a 2008 presidential campaign event in Michigan, Obama confessed that she originally asked her husband not to run for president in order to protect her family from the spotlight. She told the crowd of supporters,

I said don’t do it. What was going through my mind is that politics is mean and tough. I mean there was nothing that I wanted for my girls less than to have their lives turned upside down, you know, to have them exposed to the public eye [or] to hear their parents being criticized on national TV.

Clearly, Obama later supported her husband's run, but that doesn't mean that the consequences weren't a real concern.

Although it seems from Trump's Dec. 12 interview with Hannity that it's maybe not so much being in the spotlight that bothers her, but rather the negativity or "nonsense" she feels these "opportunists" are focusing on. It's possible that the first lady would rather the public focus on the good she's trying to do during her time in the White House with her "Be Best" initiative, which aims to relieve some of the challenges facing children these days — well-being, social media, and the opioid crisis.

Unfortunately public figures don't always get to pick where the spotlight shines and how bright. An office as big as the White House makes you susceptible to praise and also critiques. As Obama put it on the 2008 campaign trail, politics can be "mean and tough."