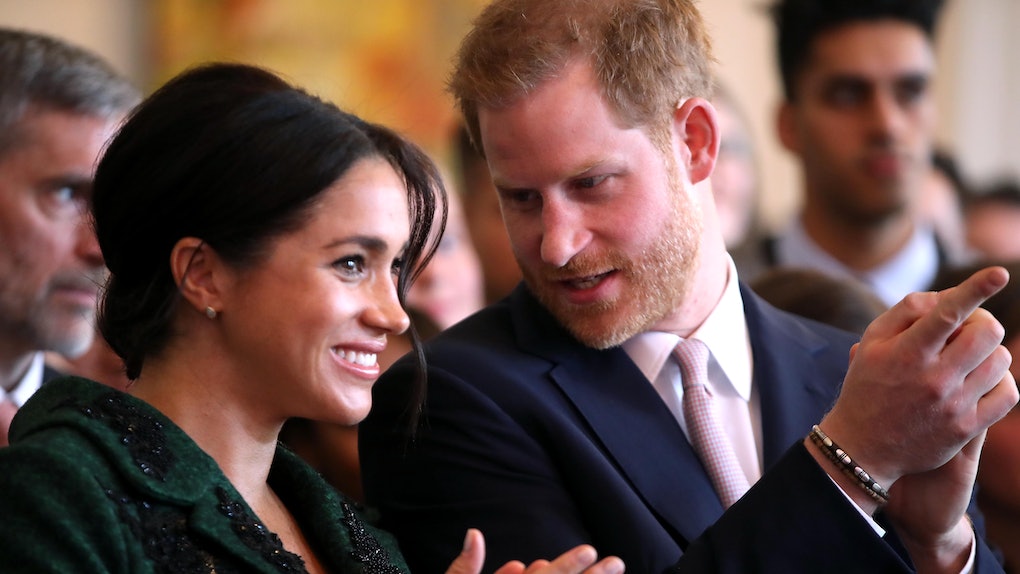 Meghan Markle and Prince Harry have enough stress on their (gilded) plate without tabloids running negative stories about them nearly every day. Just in the last few weeks alone there have been rumors that Prince Harry and Prince William have a rivalry going on, Kate Middleton and the Marchioness of Cholmondeley are now “rural rivals,” and Meghan Markle is hard to work with. Now, there are reports that Palace staff have given Meghan a cruel nickname. And Meghan Markle’s reported nickname among palace staff would reportedly really anger Prince Harry. As it freaking should!

According to Tatler, a high-end U.K. magazine that's popular for its reporting about the English aristocracy, Palace staff have reportedly been calling Meghan Markle “Me-Gain” behind closed doors. Elite Daily reached out to Kensington Palace for comment on this report, but did not hear back by the time of publication. Um… 1) that’s a horrible thing to call someone, let alone a pregnant woman! 2) It's not even that clever or funny. I'd expect more wit from a kindergartener, honestly.

So is this name-calling actually happening, or is it just negative tabloid fodder?

A source close to the family reportedly told the Insider that the nickname rumors seemed "completely untrue." Former palace press secretary Dickie Arbiter also feels this is most likely tabloid talk and not fact.

Arbiter spoke with Nine News Australia to comment on these reports. "Being negative sells newspapers at the end of the day," he said, adding that in response to these rumors, Harry "will be angry, he will be upset, he will want to keep his head down and he will want to protect Meghan." Naturally.

Arbiter also noted that Harry would be upset that this story was coming out in the first place, whether it’s true or false.

"He would be angry that something like this is coming out,” Arbiter said. “You have got to remember too, I mean you were here for the wedding and you saw how the media were operating. They were putting Meghan and Harry right up on a pedestal. Since the end of summer in the autumn, they have been chipping away at those pedestals and really having a go."

The U.K. press has really been having a field day with all of these royal feud rumors. There were reports a couple of weeks ago that Harry and William's relationship is tense due to a reported rivalry. Earlier this week, reports claimed that Kate Middleton is very upset about the rumors that she and Rose Hanbury, Marchioness of Cholmondeley, are in a bitter feud. And reports that Meghan Markle is difficult to work with have unfortunately been around ever since she started dating Harry.

In the midst of all of these intense tabloid rumors, Arbiter advised the Duke of Sussex that he "keep his head down" and wait for the arrival of his and Meghan's first child, after such point he and Meghan can start fresh with their family.

In the meantime, however, Arbiter noted that “they are in a bit of limbo at the moment."

"They are sort of living at Kensington Palace, Frogmore Cottage is being overhauled and until such time they can settle in there," he continued. “Their life is sort of a bit floaty at the moment, as I said a moment ago, in limbo. Once that is out of the way they can really work together as a partnership, as a double act, and support the Queen and support his father, which is what he’s there for.”

More like this
Meghan Markle's 'The Bench' Children's Book Was Inspired By Prince Harry In The Sweetest Way
By Sydney N. Sweeney
Meghan & Harry Reportedly Wished Will & Kate A Happy 10th Anniversary
By Candice Jalili
As @Royal_Suitor, Here's Why I'm Dedicated To Defending Harry & Meghan
By R.S. Locke
Stay up to date