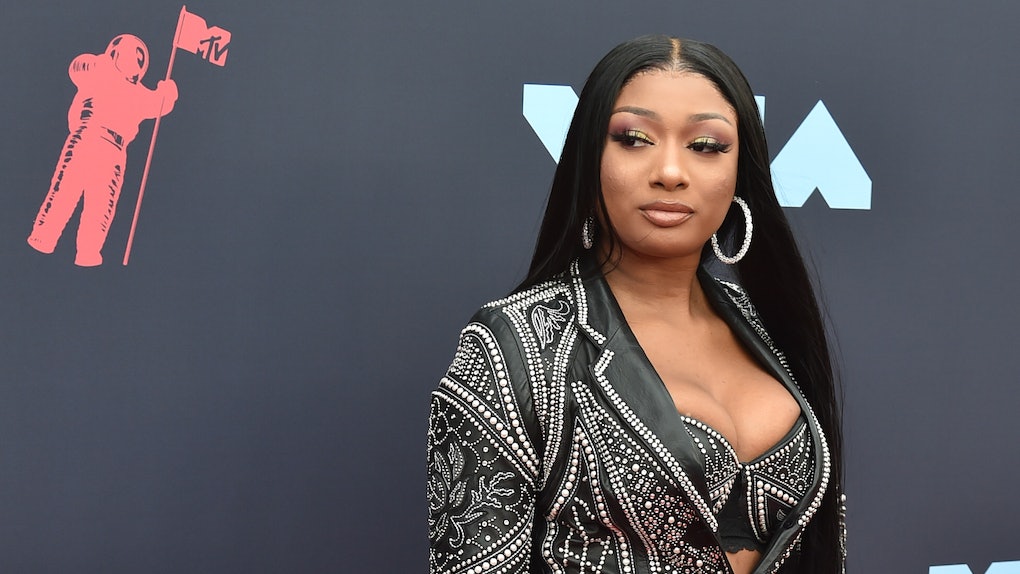 Megan Thee Stallion is putting an end to the gossip surrounding an incident she was involved in in the early hours of Sunday, July 12, which ended with rapper Tory Lanez arrested on charges for having a concealed weapon in his vehicle. (Lanez's team did not immediately respond to Elite Daily's request for comment on the charges.) Following the incident, Megan Thee Stallion says she was shot in the foot.

On July 13, TMZ reported Lanez was arrested when a gun was found in his car after police responded to a reported disturbance outside a Hollywood Hills home. Witnesses claimed to TMZ that when cops showed up, people in the SUV continued to argue before shots were fired into the air and the car drove off.

Police later reportedly located the vehicle with Lanez, Megan, and another unidentified woman in it, at which point the police discovered Lanez's concealed weapon and arrested him.

TMZ originally reported Megan suffered an injury to her foot due to broken glass, but, on July 15, she took to Instagram to clarify the actual nature of her injury.

"I suffered gunshot wounds as a result of a crime that was committed against me and done with the intention to physically harm me,” Megan wrote in an Instagram statement. "I was never arrested, the police officers drove me to the hospital where I underwent surgery to remove the bullets."

Megan continued: "I’m incredibly grateful to be alive and that I’m expected to make a full recovery, but it was important for me to clarify the details about this traumatic night. I’m currently focused on my recovery, so I can return back to my life and back to making music as soon as possible." Elite Daily reached out to Megan for further comment, but did not hear back by the time of publication.

Megan added she was not arrested, but that she had learned from the incident. "This whole experience was an eye opener and a blessing in disguise. I hate that it took this experience for me to learn how to protect my energy," she wrote.

Megan has made no further comment on where the bullets came from or who was responsible.

More like this
I Tried Megan Thee Stallion's Hot Girl Smoothie Recipe & It's My New Fave
By Abby Monteil
BTS' Statement Condemning Asian Hate Gets Real About Their Experience With Racism
By Michele Mendez
Meghan & Harry's Statement About Prince Philip's Death Is Simple, But Moving
By Sydney N. Sweeney
Stay up to date