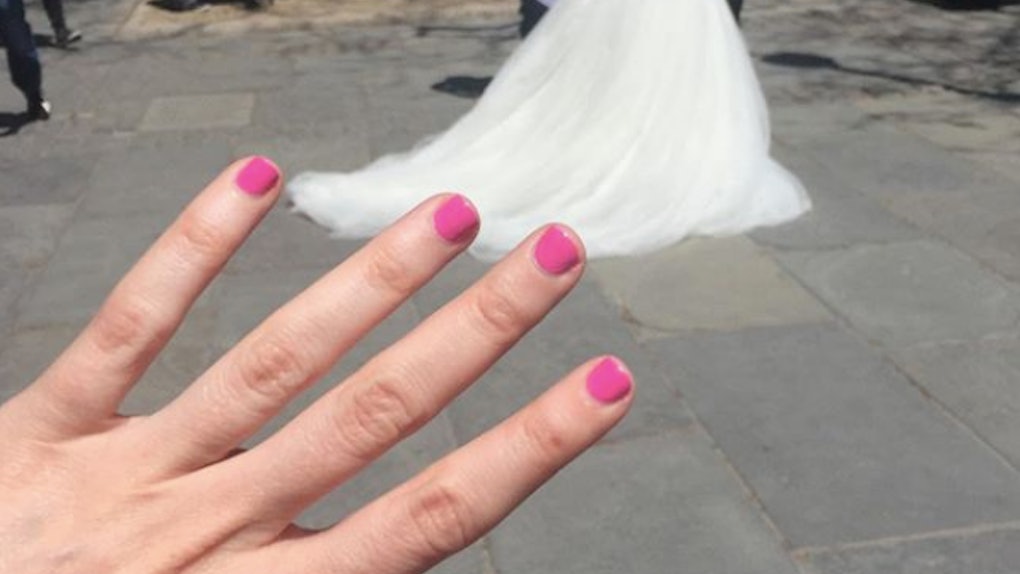 I'm getting to the age where my newsfeeds are starting to get increasingly filled with engagement photos. Now, I personally have no intention of getting engaged anytime soon, but for a split-second after seeing those images, I can't help but wonder if my life choices are "normal" enough. I know there are plenty of women who feel the same way — but the problem is we're just not seeing a lot of other happily un-engaged women like ourselves on our newsfeeds. Cue: the @NotEngaged Instagram account. What's that, you ask? Well, a hilarious woman named Mary McCarthy has created pretty much the best Instagram account of all time that manages to be equal parts hilarious and relatable.

"I was a bridesmaid a million and a half times. I love seeing my friends find love, but anyone in their 20s [or] 30s can relate to their feeds becoming overwhelmed with engagement photos," McCarthy explains to Elite Daily. "I was driving home from an engagement party, picked up some emergency food, and texted my friends, 'When you're not engaged but you have tacos.' A few weeks later, I started the Instagram account."

when ur #notengaged and u go to the park for some lovely rays and no love...wait w. t. frig is THIS. its a TUESDAY u guys. u did this on the first nice day on purpose. o look at us we’re in love and we aren’t sitting on the grass eating stale pita and hummus not that anyone was doing that (no really u look beautiful, mazel) #blessed

For those of you feeling insecure about being the only single friend left in your group, McCarthy has some great words of wisdom. "Getting married isn't the end game," she advises. "You have so much to give this world, get out there and live it up! Learn how to invest or release an album or just read all the books you want. Focus on what you want to do. Everything else will fall into place."

Despite what the @NotEngaged account may lead you to believe, McCarthy is still totally open to being engaged. "I have absolutely nothing against marriage or getting engaged. I think finding love is beautiful," she says. "It should happen when it's supposed to, I just don't see it as a goal to achieve."

If she does happen to meet her Mr. @NotEngaged, don't worry. The account isn't going anywhere. "Well, for now I see it as a character I love writing, so who knows! Or I'll turn it into a horribly annoying Instagram filled with engagement photos forever. Stay tuned!"

With more than 30,000 followers since launching her account in 2016, McCarthy admits its success has come as somewhat of a shock. "The sudden attention is definitely surprising! It was a slow growth that started with just my friends following, and then a few thousand at the beginning of this year," she tells Elite Daily.

Her only goal really is to put a smile on our faces. "If it helps make a few people laugh or smile, that's all I need from it," she tells Good Morning America.

Listen, I'm not even single but her account still put a smile on my face so I'd say she's definitely managed to accomplish her goal.

Before we wrap this article up, let me leave you with one of my personal favorites of her captions:

when ur #notengaged and u r trollin the park for a potential bae and ur like “oooo this ones tall and handsome and green wait ur an organic cucumber im in the farmers market and i just spent my dowry on asparagus.” great ill be supes healthy by myself. #blessed

OK, now everyone go follow @NotEngaged on Instagram right now! Whether you're engaged or not, she's absolutely hilarious and totally inspiring.

More like this
Zac Clark & Tayshia Adams Are Wedding Planning & I’m So Pumped
By Lydia Wang
When Are Ariana Grande & Dalton Gomez Getting Married? Here's The Reported Tea
By Corinne Sullivan
20 "Truth Or Dare" Questions To Text Your Crush & Get Flirty
By Rachel Shatto
Stay up to date