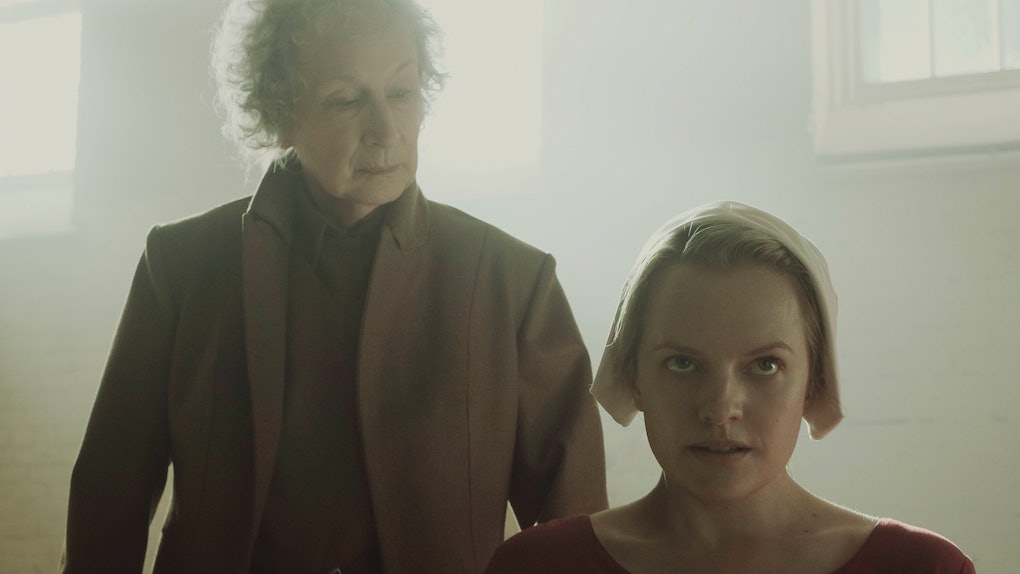 The Handmaid's Tale was written back in 1985 at the height of the Reagan Revolution. Margaret Atwood imagined the world of Gilead in response to the political climate of the time, where the Republican establishment had begun to successfully court the Evangelical population to the point where Reagan won a 49-state landslide in the 1984 election. Yet, the story resonates even more loudly today, 30+ years later, under a entirely different political regime. Want to know how to write like this? You can sign up for Margaret Atwood's Creative Writing MasterClass, which was announced this week.

For those who haven't read Atwood's other work, and only know The Handmaid's Tale, her writing has always been some of the most forward-thinking tales. This goes for all of them, even the ones looking backward, like her historical fiction novel Alias Grace. It too was adapted for streaming by Netflix, and watching the six-episode miniseries during a time of #MeToo brings home just how long these issues have been going on in our society.

Atwood's most exceptional work though, in my opinion, is the MaddAddam Trilogy, which was in adaptation limbo over at HBO for nearly a decade, and has now moved to Paramount TV. Hopefully, it will find its way into production soon.

For those who hope to write something as powerful, the MasterClass will launch this fall and is now open for pre-enrollment. Here's the video announcement:

Creativity is one of the most essential things about being human. Storytelling is very ancient; the novel is a more modern form of storytelling. Like every other creative endeavor, novel-writing is partly learn-by-doing. In my MasterClass, I’m happy to share how I wrote my stories, and my processes and tips, with people who want to write fiction themselves.

For those who aren't familiar with MasterClass, here's how it works:

MasterClass is an immersive online experience that offers access to genius by allowing anyone to take online classes with the world's best. Our instructors include Christina Aguilera, Serena Williams, James Patterson, and more. These video courses are 100% exclusive - MasterClass produces the courses directly with the instructors to capture exactly what the masters want to teach.

Individual courses can run as short as two hours to as long as five, split into videos of varying length, which are available to re-watch when needed, though you can't download them. You can download the PDF supplemental workbooks, though. Those who sign up for classes are encouraged to form student groups to discuss lessons. The professors have "office hours" just like on a college campus, where they answer selected questions from the students they deem the most useful for the entire class.

Atwood’s MasterClass will share her approach to storytelling and encourage students to look for inspiration in real events that have taken place throughout history (just as The Handmaid’s Tale was inspired in part by the Salem witch trials and 17th-century Puritan society). Other topics will include how to write dystopian fiction and how to keep readers engaged. Atwood will give students a look at her own research materials and share the first handwritten draft of The Handmaid’s Tale, as well as the manuscript draft materials of Alias Grace.

There is no hard end time, though each course has a suggested length it should take. Classes can be purchased individually, or one can buy an "All Access" pass and take whatever courses catch your fancy. The Atwood course as a single class runs $90. The All-Access pass runs $180 per year, with a 7-day free trial.

Check out the Masterclass site, and pre-enroll here.

More like this
Who Did Emily Poison? 'The Handmaid's Tale' Season 2 Is Off To An Intense Start
By Ani Bundel
In 'Riverdale' Season 5, Toni Topaz Is The Black Superwoman Without A Cape
By Erika Hardison
Emilia Clarke's Comic Book 'Mother Of Madness' Is Full Of Girl Power
By Ani Bundel
Stay up to date