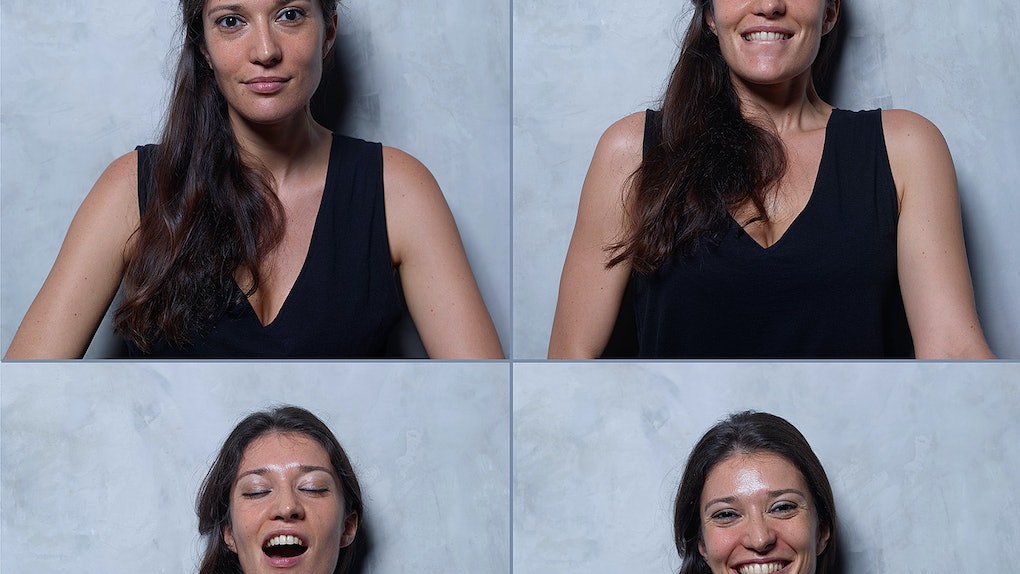 Remember that episode of Friends where Ross accidentally films him and Rachel having sex? Basically, Ross was recording himself tell a story when Rachel walked in and they started boinking without realizing the camera was still running. In the end, the two decide they want to watch the video... only to turn it off minutes later because they were horrified by the way they looked whil orgasming. As hot as the actual act of orgasming is, most of us don't exactly look stellar when we're at our ~pleasure peak~, but in a new series, photographer Marcos Alberti photographs real women orgasming and the looks of pleasure on their faces encourage us all to maybe not so be embarrassed by our not so sexy O-faces.

Even if you're not a photography buff, I'm going to go ahead and guess you've seen Brazilian photographer, Marcos Alberti's photos before. He's the one who took that photo series of people after having zero, then one, then two, then three glasses of wine. Yeah, remember when that was all over your news feed? Well, Alberti is back with a more sexy project. In what he called "The O Project," he implements the same concept of taking four pictures of the same person and collaging them together. However, in this one, he partners with sexual well-being brand, Smile Makers, to capture the women in various states of orgasm.

Check out this behind the scenes here:

The series featured 20 women from a diverse range of looks and backgrounds. Alberti highlights this diversity on his site: "The women span all ethnicities and nationalities, coming from seemingly more sexually liberated countries, such as the USA and France, to more conservative communities like China and Singapore." The women were asked to pleasure themselves with a personal massager and Alberti snapped photos of themselves before, during and after orgasm.

Check out all 20 of the amazing photos for yourself below:

My favorite part of going through these pictures? First of all, the visible difference between the first and the last photo. EVERY SINGLE WOMAN looks visibly happier, more calm, and more confident in that last photo. Despite the fact that they all look so different, each one of the women has the same glow about her in that last photo.

And that similarity you notice wasn't a coincidence on Alberti's part. In fact, part of what he was trying to do with this campaign was to drive home the point that all women, no matter what their background, should be in charge of her own sexuality. "The underlying message: all women deserve to be in control of their sexuality, no matter their background," his website writes. "Women should be free to be empowered by - and have a little fun with - their sexuality."

Fan Yang, Global Brand Manager of Smile Makers, highlights the importance of those last images of the women glowing. “That final shot, of a strong female grinning into the camera, is exactly what we want people to see," she explained. "We hope that everyone viewing this project will feel more confident about their bodies and sexuality. All it takes is one smile at a time.”

While most of us have been trained to be embarrassed by our O-faces, Yang explains that the women featured in the campaign actually loved their final photos. "All the women who modeled were in awe of their photos, especially the final shot where they were glowing and radiant."

“I love that we were able to speak so frankly with these women about sex and pleasure," Alberti added. "When you approach the taboo topic of sex through the lens of humor, people start to open up and share opinions more freely, which can lead to a monumental change in people’s mentality.”

Who knew a bunch of pictures of people orgasming could be so inspiring?