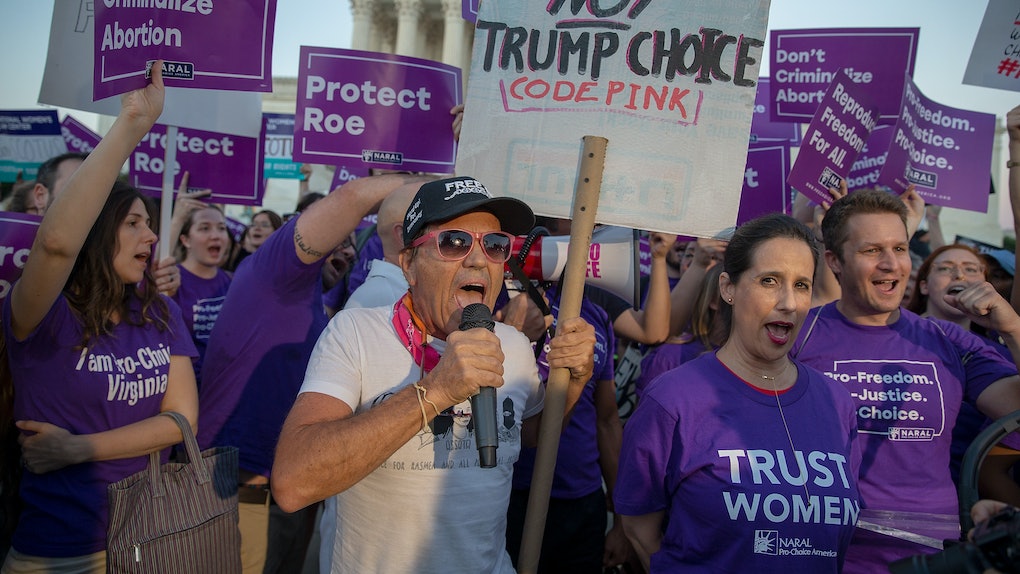 Tuesday, Jan. 22nd marks 46 years since the Supreme Court's decision in Roe v. Wade, the landmark ruling which effectively legalized abortion in all 50 states. It's 2019, but it would be hard to blame some for feeling as though the 1973 decision never happened — abortion may be legal, but for many American women, that doesn't mean it's accessible. In fact, many women still can't easily access abortion more than four decades later.

Though Roe legalized abortion broadly, various decisions and laws at the state level have chipped away at access, rendering abortions harder and harder to get. While, under Roe, no states can outright "ban" all abortions in all cases flat-out, many have been passing restrictions at an alarming rate. Since Roe, states have enacted over 1,100 measures restricting abortion in some form, according to the reproductive health think tank Guttmacher Institute. Between 2011 and 2015 alone, it found that 288 abortion restrictions were enacted at the state level. That trend has only continued under President Donald Trump; in 2017, states passed 63 laws restricting abortion access, and 23 in 2018.

While Guttmacher's research shows that nearly a quarter of American women will have an abortion by the time they're 45, there's a big problem: roughly 39 percent of women aged 15-44 live in counties in the U.S. that don't have an abortion clinic, based on 2014 population data.

Between new laws and restrictions that explicitly restrict women's access to abortions and the dearth of available clinics, there are numerous barriers that make it harder for women to get access to the procedure. In an email statement to Elite Daily, Dr. Sarah Roberts of Advancing New Standards in Reproductive Health (ANSIRH) says restrictive policies are, in effect, working as de facto bans.

"Although abortion is legal in the United States, we know that restrictive abortion policies across the country already prevent some women from obtaining wanted abortions," says Roberts. "We also know that while most women seeking abortion are sure of their decision, living in states with multiple restrictive abortion policies (such as Louisiana) does prevent some women from obtaining abortions."

Specific restrictions run the gamut, including exemptions to allow providers to refuse abortion services on religious or moral grounds, "informed consent" laws requiring women to receive information about their options, and mandatory waiting periods before getting the procedure. Some, called Targeted Regulation of Abortion Providers (TRAP) laws, put excessive onus on physicians, for example, by requiring them to have special contracts with hospitals — which hospitals may be reluctant to give due to the controversy around abortion — before they can administer the procedure. The onerous requirements of TRAP laws can push clinics out of business, making it even harder for women to access care.

In part because of the increased restrictions, clinics themselves are becoming fewer and farther between. Per Guttmacher data, a total of five states — Mississippi, Missouri, North Dakota, South Dakota, and Wyoming — have only one clinic each to service the population of entire state. This phenomenon has become so common now that there's even a term for it: abortion deserts. A recent study by ANSIRH found that there are 27 such "deserts" in the country, where women have to travel 100 miles or more to access a clinic. All of those five states except Wyoming also have mandatory waiting periods before an abortion procedure, meaning that people seeking abortion care may have to make the journey multiple times.

Opponents of abortion see these restrictions as key steps in preventing women from getting the procedure. "Waiting periods before an abortion are critical for saving the lives of innocent children and ensuring that women have a right to know and weigh all of the facts prior to an abortion," says a statement by anti-abortion group National Right to Life. "This time gives the mother a chance to consider all of her options and receive counseling to ensure she has made an informed decision." Elite Daily reached out National Right to Life for additional comment on the topic, but didn't receive a response as of publication.

But just because abortions aren't readily available, it doesn't mean they don't happen. It just means it's harder for women to get them safely. The ANSIRH study showed that without proper access to care, women will go to great lengths to pursue abortions, by what are often risky means; some 11 percent of women studied had attempted to induce them on their own. In recent years, NPR reports, pregnant women in Texas have been going to Mexico to purchase abortion pills and self-administering them, a situation that puts them at grave risk of health complications. At the time, State Solicitor General Scott Keller disputed the effects of a law which had required clinics to close, arguing that clinics would "remain open in each area where one will close," and women would be able to access a clinic within 150 miles per CNN. The law was later struck down by the Supreme Court in the case of Whole Women's Health v. Hellerstedt, in June 2016.

"I wish people in my generation realized what has to happen when people have a back alley abortion," Karina Provost, a Planned Parenthood organizer, told Elite Daily in an October interview. "My mom had to have one in Brazil and she still has issues from it. That was over 45 years ago."

In 2018, the Supreme Court upheld one such restriction in Arkansas pertaining to medication (pill-based) abortions, requiring admitting privileges for physicians administering medication abortion. The restriction, ANSIRH's Dr. Daniel Grossman told Elite Daily in May, "doesn't mean that women in the state can't get [the medication], but they'll have to travel much farther to get it, and they'll still be back home in Arkansas when they take it."

These restrictions can also have major consequences on women's health. As many women seek abortions for health or economic reasons, ANSIRH also studied the effect on women of being denied the procedure due to having passed the state's pregnancy cutoff date. The study found a stark impact on women's overall health and financial wellbeing. Women denied an abortion, it found, were more likely to experience serious complications in the pregnancy (including death), stay with abusive partners, and suffer anxiety and loss of self-esteem. It also found these women were less likely to have "aspirational life plans" for the following year, indicating that they'd scaled back their goals to accommodate a pregnancy.

So, while Roe may be still fully in effect, it's hard to call it alive and well given how many women in the U.S. don't have ready access to an authorized provider who can safely administer the procedure.