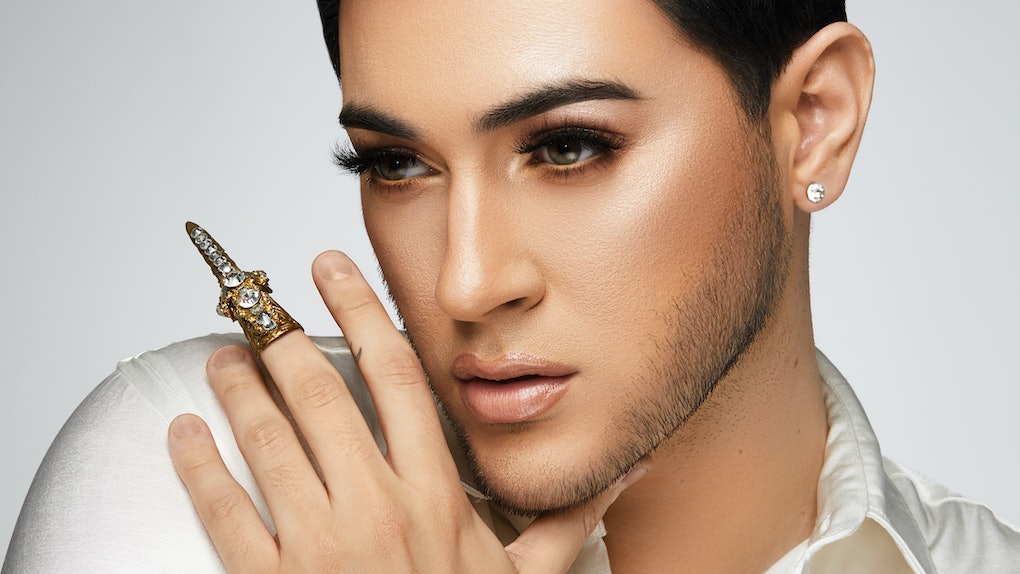 Manny Gutierrez, MannyMUA, Reveals How His Love Of Beauty Helped Him To Embrace His Sexuality — EXCLUSIVE

You need only a basic lay of the social media beauty land to get a taste of just how far Manny Gutierrez's reach goes amongst beauty lovers everywhere. The person who first stepped into the beauty world via working at Sephora and MAC counters is now a respected beauty guru, as well as the founder and CEO of his very own brand, Lunar Beauty. Oh, and that's all in addition to his super cool, very casual over 4 million YouTube subscribers and Instagram followers. But it was certainly a journey to get to where he is now. In an exclusive interview with Elite Daily, Manny Gutierrez reveals how his love of beauty went hand in hand with his sexuality, the ins and outs of launching Lunar Beauty, and so much more.

Before essentially catapulting into the social media spotlight and becoming one of the first male ambassadors for Maybelline, Gutierrez began his career in beauty with what most do: a fervent passion. The passion was so strong, in fact, that he ended up ditching his plan of attending medical school to pursue it. Despite knowing the stakes were incredibly high, Gutierrez tells me he had "no idea" his career and reach would take off in the way that they have, from beauty retail to straight-up stardom.

"I started [my career] on a complete whim — I was actually working at Sephora at the time — and I didn’t see a lot of male representation in the beauty world. And honestly, I [was] like, 'You know what, if I wear makeup to work ... I might as well post about it and see what the response would be,'" he says. "And it ended up being really positive at the beginning. I think [people] were very intrigued by the fact that I was a guy doing it, and I wasn’t shaving my face or anything like that."

The overall positive feedback Gutierrez received when he started his YouTube channel and Instagram doesn't mean the journey to get to there was without its hardships. In 2019, the beauty world is making valuable steps toward becoming a space that everyone — regardless of gender or skin color or sexuality — can see themselves in. But even just a few years ago, this wasn't always the case. Gutierrez points to one of the hardest parts of breaking into beauty as being able to "get brand recognition" or to garner the support of a brand, given that he was a boy in the beauty space.

"It was really, really hard in the beginning because a lot of brands didn’t see me as someone serious or didn't take me very seriously because of the fact that I was a boy," he says. "That was definitely a hard pill to swallow in the beginning."

Even before trying to make a name for himself in the beauty world, Gutierrez dealt with another hurdle: navigating his sexual identity, and how it related to his love of beauty. Though he's been incredibly open with fans about his LGBTQ+ identity, Gutierrez says he "didn’t really embrace [his] inner self as much" in the beginning.

"Growing up in a religious household, it was just kind of hard for me," he says. "My parents didn’t really understand me, so I was always kind of fighting this internal battle."

I'd venture to say the internal battle Gutierrez describes is one many an LGBTQ+ individual, including myself, knows all too well. Luckily, though, in discovering, nurturing, and embracing his love for all things beauty, Gutierrez says he felt more comfortable in his own skin and in embracing who he was, his sexual identity included. "I was able to express [how I felt] on the inside on the outside."

He continues that having such a major platform to truly be creative and share his experiences allowed him to connect with other people who shared similar journeys. According to him, the stories of others' experiences "really affected" him and encouraged him to "be better for [his followers]."

It's clear Gutierrez has come a long way from being a beauty beginner who was unsure of himself. Now, having embraced both his sexual identity and his love of beauty, and having created the ultimate space for himself in the industry, Gutierrez feels hopeful at the direction beauty is taking in terms of inclusion. (Although, there's still more work in this arena to be done.)

"I feel there’s so much representation in the beauty world nowadays when it comes to every walk of life. There’s every single color, every single race, every single gender," he tells me. "I truly think that it’s when people see something different [that] they start to push the boundaries a little bit more. People love seeing someone different ... And it’s such a cool thing to see that there’s people out there pushing their own boundaries and being able to continue to fight."

It's safe to say that, among the influential names carving a space for minorities in the beauty industry, Gutierrez will be right alongside them, continuing to push boundaries. And I have a feeling one of the mediums through which Gutierrez will do that is through his brand, Lunar Beauty.

Launched in the summer of 2018, Lunar Beauty was Gutierrez's first foray into developing and owning his very own beauty brand and products — without another brand name attached. Lunar Beauty commenced with Gutierrez's Life's A Drag eyeshadow palette, inspired by the stunning makeup creations of drag queens, who Gutierrez says were some of his first major beauty inspirations. The brand now has six products under its belt and is geared up to expand even more in the coming year.

While the launch was well received and the line is still adored by fans, to put it bluntly, the fear surrounding the initial launch of the line was real, according to Gutierrez, mostly because he had to go it pretty much alone. "It was just me, my mom, and my dad," he says, going on to say that he heavily feared the launch being unsuccessful and losing the money that went into it.

"I’ll always have a special place in my heart for it, because it was my first product," he says. "It was something I was so passionate about, and I could create any look I want with it, and it’s just a very versatile palette."

Gutierrez says Lunar Beauty takes up "so much, if not all" of his time, so if you don't see him living it up on social media every second, it's likely due to one of two things. 1) He's busy dreaming up and developing some newness for Lunar Beauty, or 2) he's busy achieving his 2019 goal of "being more present in [his] real life."

As Gutierrez takes this year to do him, I think every one of us would do well to focus on the same. Who knows what kind of passions we could all make an overflowing reality.