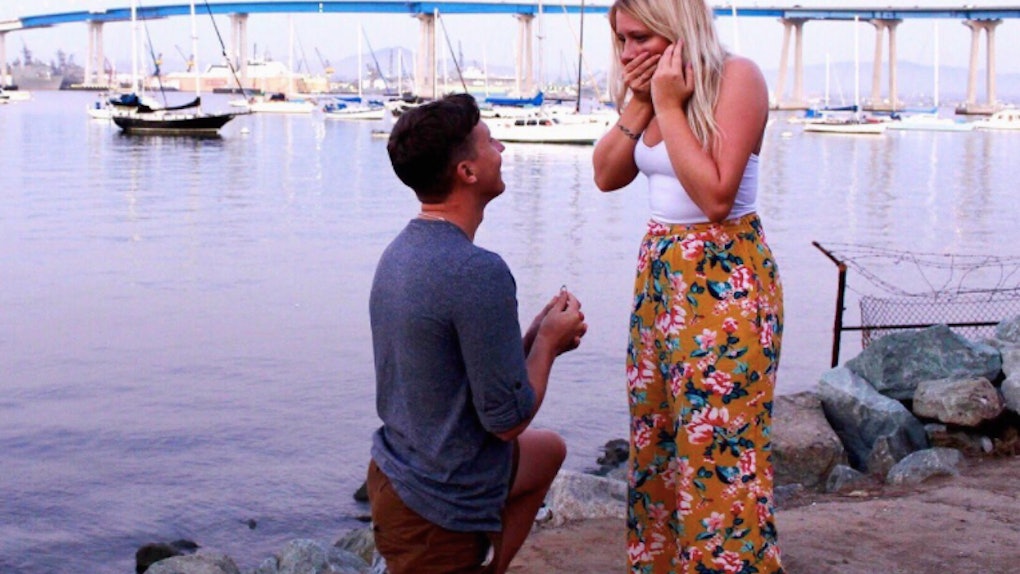 You were invited to a wedding, and you NEED a date. Ugh, you can't go through the humiliation of showing up to another family event alone with everyone hounding you about how you're STILL single. So, like any good millennial, you turn to social media. You put a tweet out there asking if anyone wants to be your date. And because you are a normal person, this will go one of two ways: Either no one will respond, or a murderer will respond. But for one lucky woman, this storyline turned into a fairytale. Madison O'Neill asked for a wedding date on Twitter two year ago, one guy said yes, and now, the two love birds are engaged.

How it all started was that our girl Madison had to go to a wedding, and in the most relatable story of all time, she didn't have a date. While many of us would probably just drink a little too much wine and inappropriately text a few exes or a platonic friend we drunkenly think could actually be a viable romantic option, Madison decided to turn to Twitter. On July 10, 2015, she posted a tweet saying, "So HMU if u wanna be my date to a wedding tomorrow," which you can read for yourself in the tweet below.

Now, if I did something like this, nobody would respond. Either that or a psychopath would respond and then proceed to murder me at said wedding. But for Madison, things worked out a little differently.

A guy named Chuck Dohrmann slid into her DMs with the least creepy response ever: "Dude I'll be your date to a wedding! When is it?" The wedding just so happened to be taking place the next day, and she finally let him know the time at 2:14 a.m. on the day of the wedding. Luckily, he was still in! No, this isn't the plot of your new favorite romantic comedy. This is real life.

The couple actually went to the wedding together, and Madison came out of it totally alive, so that in and of itself would have been adorable enough to last me a lifetime, but no, things get even more adorable for these two.

Madison posted their engagement photo along with all of the other milestones of their love journey on Twitter, with the caption, "crazy how things work out."

Needless to say, the Twitter world FREAKED OUT over this news. In addition to the almost 90,000 retweets and 450,000 favorites, plenty of people responded to the big news.

Some people were kind of confused.

But don't worry; Madison's here to clear up any confusion.

People are hoping for a livestream of their wedding.

And luckily for all of us, Madison didn't rule it out.

You know I'm absolutely tuning in. But now, there's one question we're all wondering here: Did they know each other before, or was Chuck actually just some random stranger she found on Twitter.

A guy named Ethan finally asked what we've all been wondering.

And it turns out — drum roll, please —they did know each other.

AH, JUST WHEN WE THOUGHT THEIR STORY COULDN'T GET ANY CUTER. The two went to the same high school, and Chuck was that older, obnoxious guy she just thought was annoying originally. THEN, HE RANDOMLY REACHED OUT, AND SHE REALIZED SHE ACTUALLY LOVES HIM AND IS GOING TO SPEND THE REST OF HER LIFE WITH HIM.

According to Madison, he currently lives in San Diego, but she will be moving there next summer for them to start their life together.

Cheers to the happy couple!