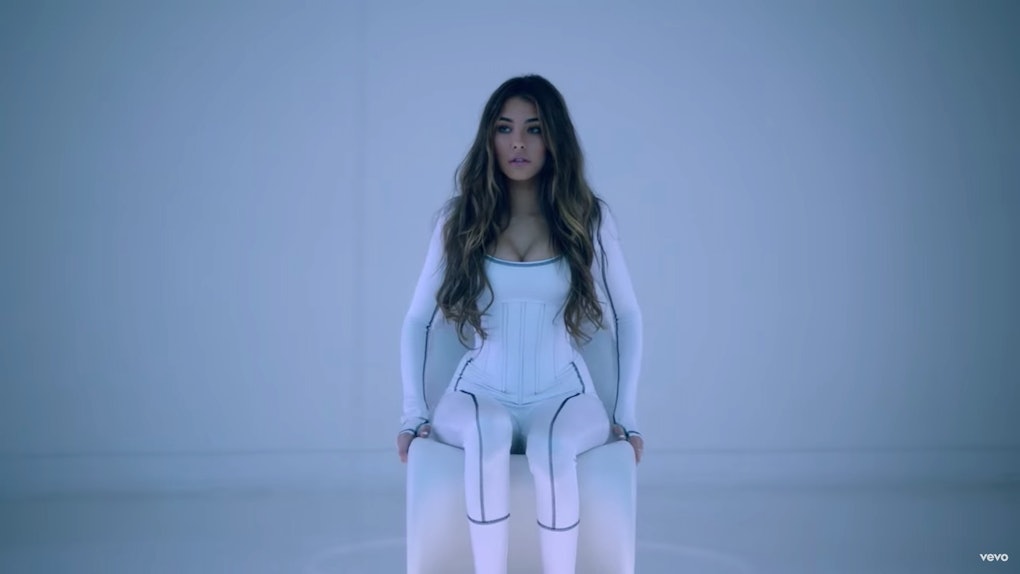 As you may have heard by now, Madison Beer just released the lead track from her upcoming debut studio album. That track, which is called "Dear Society," explores what it means to live in a digital age where everything, even your most personal feelings, is laid bare for the internet. And the video for the song really drives that message home. Madison Beer's "Dear Society" music video could be a sci-fi movie in and of itself.

The video "Dear Society" was released on Friday, May 17 and fans are loving it. It's basically every sci-fi fan's dream come true, only with Beer at the center of it. The video starts out with Beer sitting in a scientific lab in a white bodysuit as a scientist explains that she going to be the subject of some creepy experiment. Throughout the video, though, it becomes clear that she wants no part of the experiment, which goes along with the message of the song so well.

If you haven't heard "Dear Society" just yet, here's a look at some of the lyrics:

Sleepless nights and cigarettes / My daily dose of internet / And all the things I should've quit / But never did, oh / Evil voices in my head / I woke up in a stranger’s bed / I lost my phone in Amsterdam, it's 5 A.M

I'm a natural disaster / But even after all that I do / It's you who's gonna be the death of me / And none of this matters / Baby, it's you, it's you…

Dear society, you've pushed me to the edge / So here's some clarity / The truth is, you're the one who’s always there for me / With my daily dose of internet / And all the things that I should quit but can't

As you can see, the lyrics really dive deep into internet culture and how society's perceptions feed into that. And this video really does a good job of alluding to the complicated nature of social media. You sometimes become an unwilling participant in it because we're so steeped in it every day. And not many people are more aware of that than Madison Beer, who has a complicated relationship with social media. While she's worshipped by her 12.7 million followers on Instagram, she's been open about how social media can be a destructive force.

And now you can see why fans are going wild over the video. It's a really interesting concept and one that Beer seems really invested in. Check out the video below:

As I mentioned, "Dear Society" is the lead track for Beer's debut studio album. Fans can expect the full album to be released in the summer of 2019, so there's still a lot to look forward to.

More like this
Joey King's Quotes About Posting Less On Social Media Are So Relatable
By Brandy Robidoux
Taylor Swift's 'Fearless (Taylor's Version)' Lyric Changes Are Small, But Meaningful
By Michele Mendez
Rosé From BLACKPINK's "Gone" Music Video Is The Ultimate Sad-Girl Aesthetic
By Abby Monteil
Stay up to date