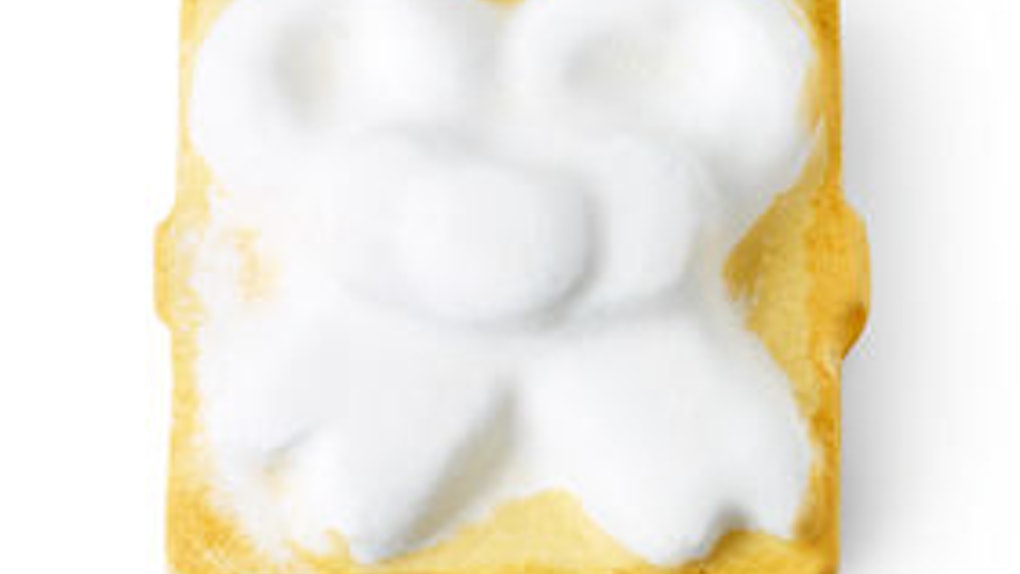 In the past, my philosophy during the holiday season has been that calories don't count, especially when it comes to hot chocolate. This year, however, my whole outlook on nutrition has changed, because I'm really striving to feel my best for the new year. You may think stressing about making it to the gym is on my agenda, but it's not. Lifting Lush's Giant Golden Wonder bath bomb into my tub is the only workout I'll need.

A wise woman named Elle Woods once said, "Exercise gives you endorphins and endorphins make you happy." And a world in which you can get endorphins from exercise and a bath bomb simultaneously is a world I want to live in. On Dec. 15, Lush will be introducing just that, in the form of the Giant Golden Wonder Bath Bomb ($20; lush.com). Weighing in at a little over two pounds, the bath bomb is already out of stock online, which is the ultimate testament to the behemoth's hype.

Featuring ingredients like lime and orange oils with a hint of cognac oil, it's practically guaranteed to send you on a train to bliss. After you lift it high above your head for an instant upper-body boost, simply drop it in the bath. You'll be overwhelmed with a shimmery, champagne smell — minus the brunch hangover and anything breakable. As it melts, the glittering, golden luster will transform into a sparkling turquoise explosion. Basically, it sounds like the bath bomb of 2017's dreams.

Tell me what sounds better than a relaxing and therapeutic bath with a Texas-sized bath bomb after the year we've had? OK, I get that there are people out there who aren't fans of a quality bath. I personally fall into the category that loves soaking, but needs to make more time for it. In an atmosphere where it's super common to be stressed all the time, I don't want to be another writer to badger you about "self care," but it's so important.

Society is constantly overstimulated, and I never realized how much I needed a break from my phone until it actually broke. I've always been the millennial to proudly wave my social media obsession high (it's kind of a package deal with the job, after all), but I learned I just don't need to be so on every hour of the day. Taking a second to chill in water with an oversized bath bomb will not kill you. Slowing down and practicing self care isn't a hindrance, it actually helps you with endurance (which is something you'll need to cart this bath bomb from the store to the tub).

If the Giant Wonder bath bomb happens to sell out before you can purchase it in stores, don't let that send you into a tizzy. Lush already predicted this, and due to the fact that they expect this product to sell out as soon as it hits shelves, they're launching a Golden Wonder Holiday Wrapped Gift Pack ($20, lush.com) that will feature a standard-sized Golden Wonder bath bomb and one standard-size Snow Angel luxury bath melt ($8, lush.com).

Compared to the bath bombs (which fizz), the angel-shaped bath melt is an oil bar, which means that it dissolves slowly and releases shimmering, almond-and-rose scented gold foam. Packed with a tons of oils and butters that will soften your skin (including fair-trade cocoa butter and rose oil), this product is ideal for anyone who has dry, itchy skin during the cold months. You don't have to have a super Instagram-worthy bathtub to relax, though. Just light a candle, turn off the lights, and unplug for a while.