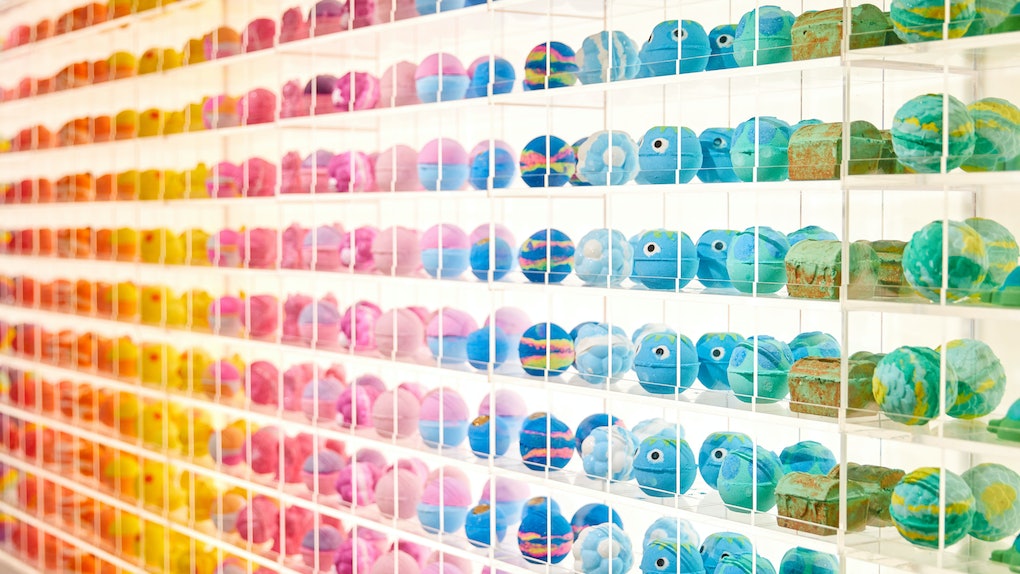 This year marks 30 years since Lush's co-founder, Mo Constantine, set up shop in her garden shed to create the product that the brand is most well-known for: the bath bomb. To celebrate, the brand is coming out with Lush's 30th Anniversary Collection which means a whopping 54 bath bombs are about to come your way soon.

Of the 54 bath bombs included in the new collection, some are brand new scents, others are bath bombs that have been discontinued, and even more are cult-favorite, best-selling fizzies that Lushies have come to know and love.

The new 30th Anniversary collection is set to hit Lush's stores and website on Friday, March 29, so you have a little bit of time to think about which bombs you're going to get your hands on. However, if you live in Austin, Texas, or plan on attending South by Southwest (SXSW) in the city (which runs from Friday, March 8, to Sunday, March 17) then you can be one of the first people to get your hands on the new collection at Lush's pop-up shop at the festival, and at Lush's downtown Austin and The Domain Center stores.

After the 30th Anniversary Collection is released, you can walk into any given Lush store (or simply peruse their website) and see that they'll have almost 100 bath bombs to choose from. That's right, in addition to the 54 bath bombs from the 30th Anniversary Collection, Lush already has around 50 other bombs to choose from between their year-round scents and limited edition fizzers.

As far as what kind of scents you can look forward to in the latest collection, there is sure to be a mix of just about everything. From the OG Blackberry Bath Bomb that started it all to the Sushi Bento Bath Bomb to the Lucky Cat Bath Bomb, the 30th Anniversary Collection has just about every bath bomb you could ever want to bathe in. For a look at some of the key players from the new collection, read on.

This Geode Bath Bomb features popping candy crackles and a pearl luster that turns your bath water into an eye-catching spectacle with scents of bergamot and lavender.

Feel like a royal with Lush's Royalty Bath Bomb. This fizzy is made with notes of jasmine, ylang ylang, and sandalwood for a bath that is extra-sparkly and fit for any queen or king.

This bomb is made up of a blend of rose and lemon oils to create a bath that is intoxicating, with cocoa butter releasing into the water to keep your skin soft, smooth, and moisturized.

The Shijimi Butterfly Bath Bomb works as a sleep aid when getting a good night's rest seems out of reach. The bomb is infused with lavender and chamomile to help you get to counting sheep as soon as possible.

More like this
These Stick-On Face Jewels, Gems, & Nail Art Are Coming For Your Selfies
By Margaret Blatz
When Does Zara Beauty Launch? The Fashion Retailer's Beauty Brand Is Coming Soon
By Margaret Blatz
Ulta Beauty's 2021 Gorgeous Hair Event Means 50% Off Living Proof, T3, & More
By Margaret Blatz
Stay up to date