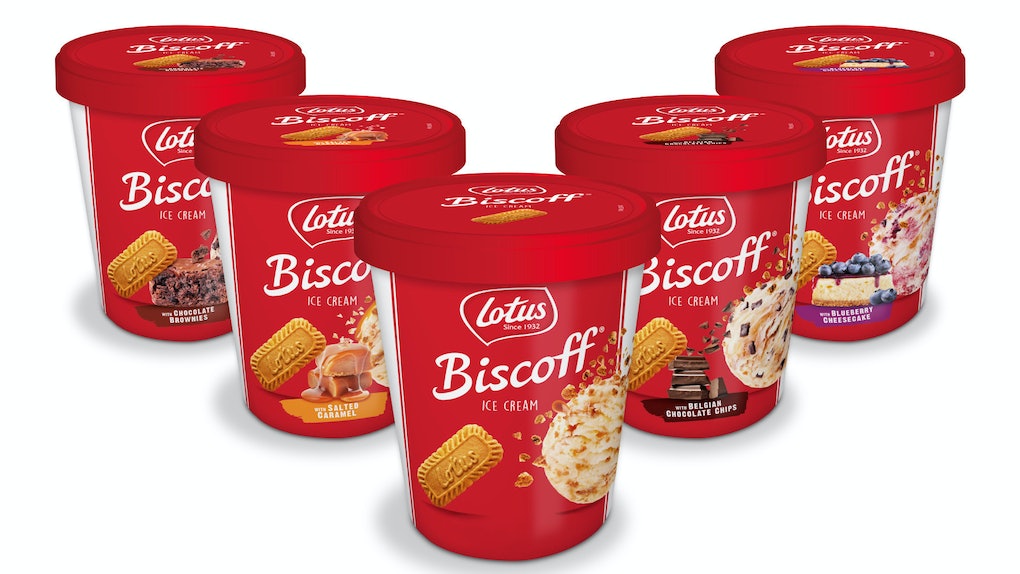 Biscoff cookies are sweet and simple — and if you grew up eating 'em (same), I have good news for you. Lotus Bakeries, the company behind the cookie, introduced a line of ice cream pints that feature actual Biscoff chunks. On top of that, Lotus Bakeries' new Biscoff ice cream is made with cookie butter, which means you'll get the flavor you love with every spoonful. If you're excited about the new scoop, get this: It comes in *five* delicious flavors (yes, five), so make room in your freezer.

Lotus Bakeries officially announced its new ice cream line on Tuesday, June 11, and I'm beyond excited to give each new flavor a try. Before I get into detail about each pint, though, I'll give you a quick overview of the ice cream itself. According to the bakery, Biscoff ice cream is made with its "original" cookie butter, actual Biscoff cookie chunks, and, of course, dairy cream.

If you're stoked for a spoonful, you're not alone. Michelle Singer, Lotus Bakeries U.S. General Manager, talked about the new dessert in the company's press release. She said, "Biscoff is exploding in the U.S. and we can't be more excited to bring the beloved Biscoff taste to ice cream."

Now that you know what the ice cream is made of, let's talk about the new flavors that'll be hitting the shelves soon. According to Lotus Bakeries' press release, Biscoff ice cream will come in the following selections: Chocolate Brownie, Salted Caramel, Original, Belgian Chocolate Chip, and Blueberry Cheesecake. TBH, they all sound delicious — but I've got my eyes on the Salted Caramel.

Heck, who am I kidding? I'll have a scoop of each, please.

Ice cream pints aren't the only goodies that Lotus Bakeries is releasing in the future. According to the company's press release, it's also unveiling ice cream bars in fall 2019 (and they sound just as good as the pints). These ice cream bars will be made with the company's cookie butter ice cream and then dipped in actual cookie butter (for real). That's not it, though: After that, they're covered in a layer of Belgian chocolate, which is great news for chocolate and ice cream lovers alike. I. Can't. Wait.

As I previously mentioned, the Biscoff ice cream bars will be released in this fall (October 2019, to be exact). However, the company's ice cream pints will become available much sooner than that. According to Lotus Bakeries' press release, the pints will officially hit U.S. shelves in July 2019. That means you'll be able to enjoy 'em this summer (and summertime ice cream nights are the best).

Thankfully, scoring a pint or a bar won't be too difficult (depending on where you live, that is). According to the company, the frozen Biscoff selections will initially be sold at various Safeway and Albertsons locations in a handful of states including Arizona, Idaho, Northern California, and Oregon. However, thanks to their "ongoing" rollout, more and more retailers will score the treats in the future.

With that being said, make room in your freezer for Lotus Bakeries' new ice cream selections — and snack on some OG Biscoff cookies in the meantime.