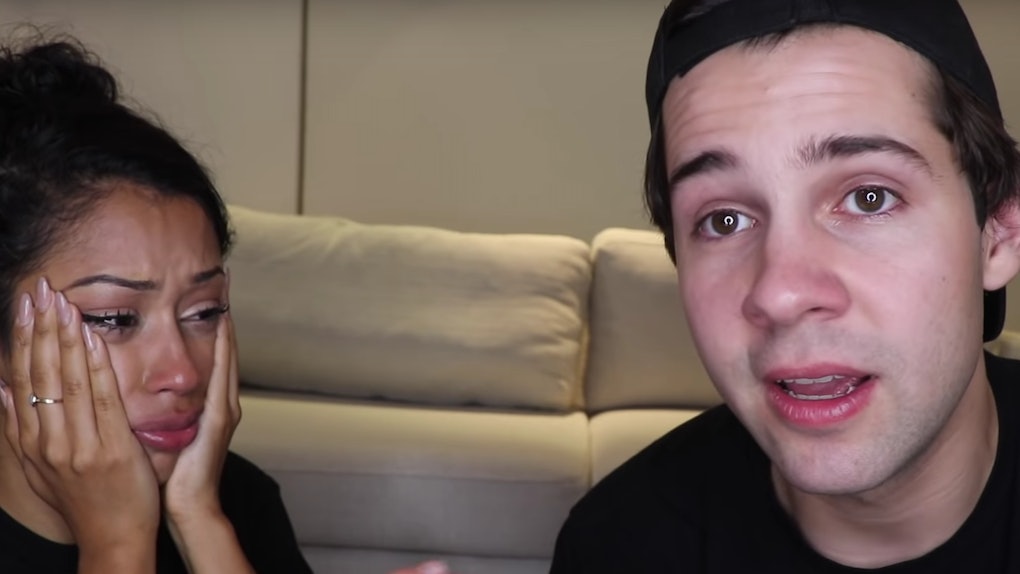 You guys, before you even start reading this article, do yourself a favor and preemptively grab yourself a box of tissues. You're going to need it for the mass amounts of tears you're about to shed. I'm going to be honest, I didn't really keep up with their videos until recently so I'm not even a ~true~ fan, but Liza Koshy and David Dobrik's breakup video still managed to break my heart into a billion and one pieces.

If you're not familiar with the (former) couple, let me give you some back story. Liza was an internet star and David was a vlogger. Two years ago, they came together and became one of the most adorable internet power couples our generation has seen. They brought their talents together and created hilarious videos of them doing silly things like making a parody of "MTV Cribs" or reacting to their first kiss. Each of their videos got millions of views because, well, they're a freaking adorable couple. You can just tell what they had was really real.

If you haven't seen them together, do yourself a favor and check the video below out. Trust me, you'll get it.

Yeah, I told you. They're adorable.

But just three days ago, their fans got some devastating news. The couple announced their breakup in a video titled "we broke up" that's already been viewed a casual 21,455,310 times.

"LIZA CHEATED ON ME. WITH SEVEN GUYS," David joked as soon as the video began.

The two joked around for a while, as they usually tend to do and finally David got down to it: "All jokes aside, we are broken up. Liza broke up with me six months ago."

Liza starts crying, the two continue to joke through the tears and they eventually have to take a two-hour break.

When they return, it's clear Liza's been sobbing. Like very clear. But they still manage to joke around with each other and IT'S FREAKING ADORABLE.

She laughs and gets back to business on explaining the "stuff" that tore them apart. "It's some rough stuff but not stuff that they can't get through. You have to love yourself before you can love someone else kind of stuff. I didn't know those were real. They're real. This is gonna sound so lame but I really want to spread love, but you have to have it first, you know? That's like saying you're gonna spread mayonnaise when you only have mustard."

At this point, David leans in to give her a hug but decides not to because he doesn't "want it to be too cliché." Then he chimes in with some adorable sentiments:

The bottom line is she's the best girl ever. Like LITERALLY I've ever met in my life. I always say this to people. I know online Liza seems like she's a really nice girl, but, like, if you get to know her, it's really weird because it's the exact same thing like there is not a bad bone in her body which is why it is so unfair that she feels not the best sometimes.

OMG, are you freaking kidding me with this?

If you're not crying yet, just brace yourself. It only gets more emotional from here.

After explaining why they waited so long to tell their fans about their breakup (they waited six months), David jokes, "If Liza goes out and finds another boy we will destroy him."

After they laugh at his joke for, Liza softly says through heartbreaking tears, "I don't want anybody."

David asks, "Who do you want?"

"You. you're my best friend," she responds.

David laughs, "See. This is what I've been dealing with for six months." Confusing stuff.

Then he clarifies: "If one of us finds someone, I just want to be respectful of that."

Um... is this the world's most amicable breakup!?!? Someone plz LMK.

Then the two start getting really real. "Liza broke up with me because she felt like we've been kind of distant because we've both been so busy. Period," David explains. "As much as I hate to admit it, I was feeling that on my side too but I just don't have the balls to pull the trigger on that and be like, 'Hey, we should take a little bit of a break.'"

"We already felt like we were kind of living separate lives, which sucked, but neither of us were coming to terms with it so I decided that we should break up," Liza adds.

Then Liza really pulls out the big guns when she says the literal nicest things ever about David and brings him to tears:

I just hope and pray everybody just keeps it a positive place between David and I. You guys know how dope David is and you know how good of a person he is and he was always good to me, he's always been a good guy to me and he's always been a freaking amazing best friend and a rock for me clearly for so long. I don't really cuss online, guys, but David's the sh*t. You're freaking dope man. David's my best friend.

"You swore online for me," he says through tears.

From there, it only gets even more adorable but I'll let you watch the whole thing unfold for yourself below:

See? I told you tissues would be necessary to make it through this piece!