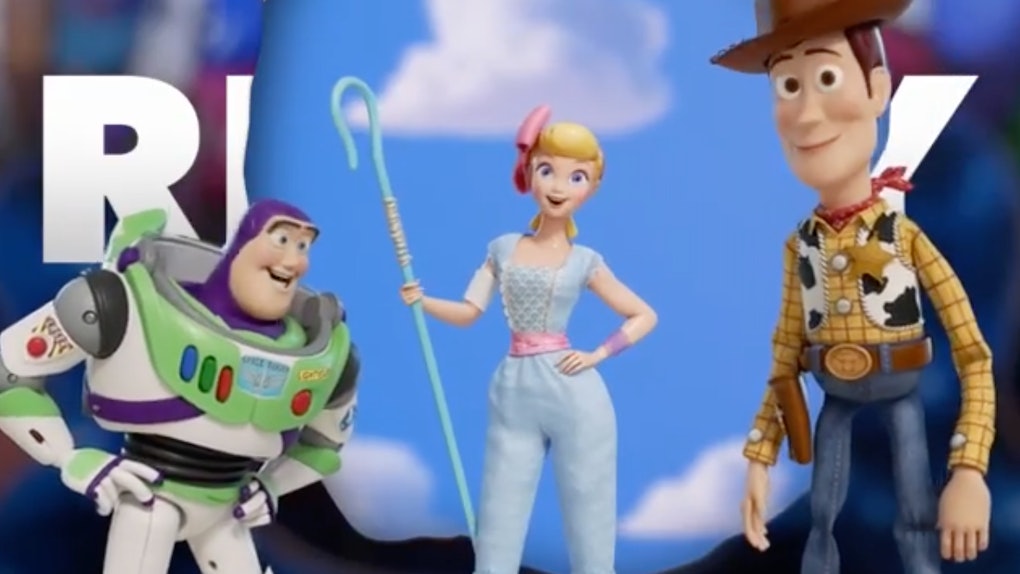 This spring, a classic childhood favorite will back on the big screen to fill tender, nostalgic hearts everywhere with the joy of going "to infinity and beyond." That's right. Woody, Buzz Lightyear, and the whole toy box of characters are coming to theaters in Toy Story 4 this June. And this time, truly the whole toy box will make an appearance. When we last saw the franchise in 2010's Toy Story 3, Little Bo Peep was notably missing. Well, now Bo Peep is back in Toy Story 4 with a new look for a whole new generation.

On Monday, Disney released a short teaser for Toy Story 4 that features Bo Peep making a big entrance by tearing through a backdrop that reads "get ready." She startles Woody and Buzz, but they instantly become relieved when they see it's Bo Peep popping in to say hi. In Toy Story and in Toy Story 2, Bo Peep wears a pretty stiff-looking pink hoop skirt and bonnet. This time around, Bo Peep looks free to move about and play with the best of them in a streamlined blue jumpsuit and cute pink bow worn on the side. Of course she's kept her shepherd's crook, though. A girl's gotta stay true to her brand, after all, and who would Bo Peep be without her sheep?

Even though Bo Peep herself wasn't in Toy Story 3, there was mention of her character being lost at a yard sale. However, it looks like there's more to Bo Peep's story. In a press release, Toy Story 4 director Josh Cooley said:

Bo’s taken control of her own destiny. While Woody was watching Andy grow up, Bo gathered dust until she took it upon herself to head out into the world. And when Woody shows up, they can’t believe that they’ve found each other again.

It sounds like Bo wasn't a yard sale casualty like everyone in the gang thought she was, but instead she took matters into her own hands and sought her own adventure. That revelation makes her new look all the more meaningful. Of course Bo Peep couldn't continue wearing a bulky dress. Since she was going out into the world on her own, she needed a look that reflects that newfound freedom. The new jumpsuit totally nails it.

Disney also released a slick portrait of Bo Peep rocking her new look, and with the addition of a purple cape. The cape makes Bo Peep look even more like a badass superhero than she already does tearing through the backdrop in the video, so I'm hoping we see a lot of it in the movie. The good news is that it seems like Bo Peep will play a big role in Toy Story 4. Disney has only released two other character portraits like Bo Peep's: one of Woody and one of Buzz. Since Bo Peep's portrait is the third one released after the two lead characters' portraits, all signs point to her being prominently featured in the new movie.

You can see Bo Peep's new look in action when Toy Story 4 hits theaters on June 21.