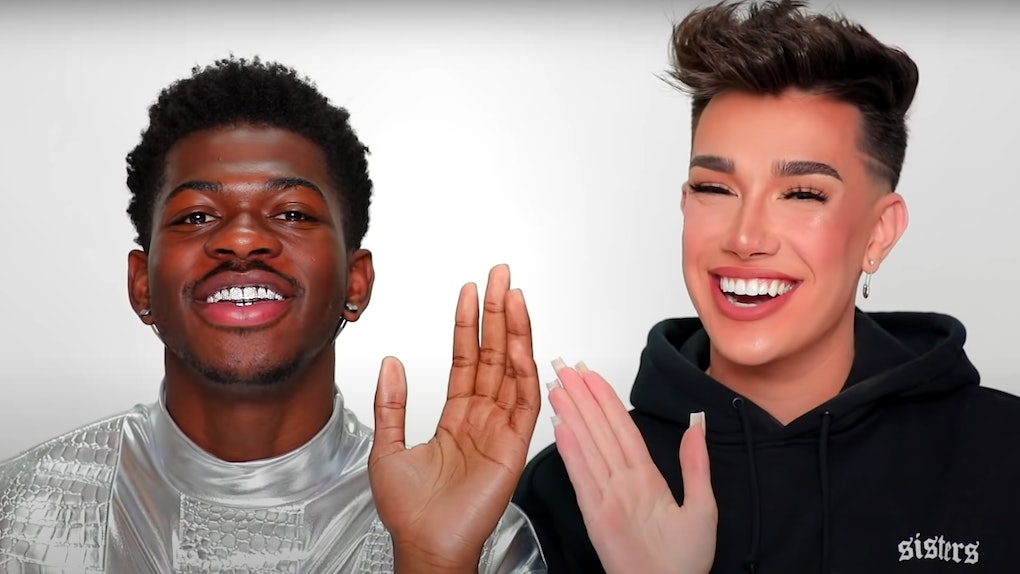 Lil Nas X is not happy with trolls on Twitter after they made sexually suggestive comments about him and James Charles. You see, he and Charles have been cooking up content together, and excitedly teased a new joint YouTube video. Unfortunately a slew of disrespectful users on Twitter flooded the comments section, and he wasn't about to let them slide. Lil Nas X responded to haters sexualizing his video with James Charles in the best way.

Charles first teased his YouTube video with Lil Nas X on Nov. 17, which showed him posing with the singer and preparing to do his makeup. "DOING @LILNASX'S MAKEUP IS NOW LIVE!" tweeted Charles. "This collab was genuinely so much fun to film, I hope you guys love it!"

Most fans couldn't wait to see the makeup tutorial, but a select few sent shade-filled tweets in response to the teaser clip. One troll tweeted, "I just know they f*cked after this."

This didn't sit right with Lil Nas X, who promptly responded to the hateful tweet. "2 gay men can do things together without y’all sexualizing it," he spat back.

You can see Lil Nas X's clapback below.

Fans who watch the full YouTube clip will get a front row seat to the festive beauty look Charles created for Lil Nas X inspired by his music video for "Holiday." The guys also chatted about his coming out experience, the success of "Old Town Road," and more.

Lil Nas X has been open about his sexuality after coming out as gay in 2019. He's also admitted the decision to do so wasn't an easy one. Speaking with The Guardian in April 2020, he said he had initially "planned to die with the secret" of his sexuality.

"I don't want to encourage them to do something they don't 100% want to do. Especially in, like, middle school or high school because it's just super hard," he said. "It's easier for me — I'm not depending on anybody. There's no one who's going to kick me out of the house, nobody to start treating me sh*tty."

Now, Lil Nas X isn't putting up with anyone dictating who he should be and he's raring and ready to shut down haters in an instant.

More like this
Billie Eilish's Response To Haters Of Her 'British Vogue' Cover Makes A Powerful Point
By Cianna Garrison
Kendall Jenner's Response To Haters Who Say She's Too Privileged To Have Anxiety Is On Point
By Michele Mendez
Is James Charles Single? Here's What To Know About The Sister Squad Star's Love Life
By Tara Martinez
Stay up to date