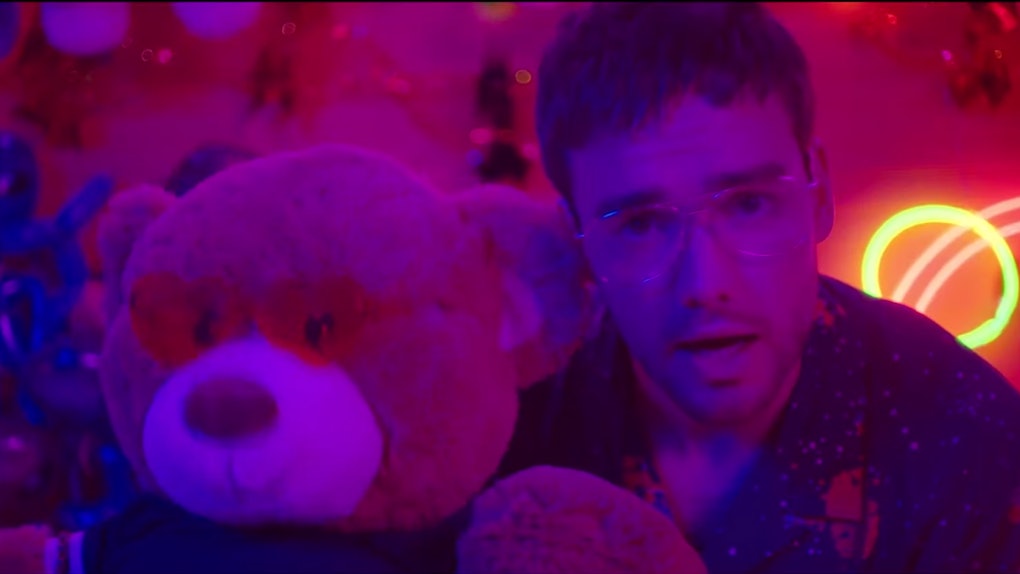 Y'all it's been two years since Liam Payne blessed fans with the catchy hit "Strip That Down." Now, he's back with another poppin' track accompanied by some bomb visuals. Liam Payne's "Stack It Up" music video is basically the perfect follow-up to "Strip That Down."

The vibrant video begins with Payne and A Boogie Wit Da Hoodie dancing and playing games in an arcade. The two musicians even become animated characters at one point.

The super fun track is all about saving your coins any way possible which is probably why Payne seems to have taken his girl on an affordable date at the arcade before working the prize booth. In the chorus Payne sings:

The track featuring is so infectious, just like Payne's previous banger "Strip That Down" featuring Quavo and produced by Steve Mac. That's because both songs were written by a dynamic duo, Payne along with music genius Ed Sheeran. Yep, Payne's debut pop track filled with trap and hip-hop influences was co-written with Sheeran. P.S. I didn't know this until I did some serious Googling. I was pleasantly surprised.

Though, it all makes total sense. Think about it. Sheeran may be known for his sweet love tracks, but never forget he also gave pop fans the uber viral dance track "Shape Of You" which peaked at number-one on the US Billboard Hot 100 charts and landed Sheeran a Grammy for Best Solo Pop Performance.

Anyway, "Strip That Down" was a major bop with the video reaching over 300 million views on YouTube. The track also reached number 10 on the Billboard Hot 100 chart.

Following that sort of success, I would hope to see the two pop stars back in the studio to make more musical magic. According to The Daily Star, Payne and Sheeran were pretty much thinking that very same thought. "Liam and Ed have teamed up again on his new song after the success of 'Strip That Down', it's called 'Stack It Up,'" shared The Daily Star's source.

Honestly, it's truly exciting to know that Payne has kept up with his solo career after One Direction went their separate ways. In a May 2017 with Billboard, Payne revealed he actually had a different plan in mind.

"To be honest with you, I wasn’t going to do a solo venture,” said Payne, who actually co-wrote songs on each of One Direction’s five albums. "I was just going to go into songwriting and carry on and do that. But then I was like, ‘You’ve been trying to do this since you were 14 years old. You would be ridiculously stupid to turn down the option to have a deal.' Coming out of the band, we had some pretty good opportunities around us. I had to do something." I am so glad you did.

"Stack It Up" and "Strip That Down" are absolute bops with just as amusing music videos. Here for it. Now, excuse me while I watch this on loop for the remainder of my day.

More like this
Who Plays Jamie In 'Cruel Summer'? You've Seen Froy Gutierrez Before
By Rachel Varina
These Tweets Comparing SuperM's "We Do" To BTS' "Dynamite" Video Are So Split
By Michele Mendez
The 'Glee' Cast's Tribute To Naya Rivera At The 2021 GLAAD Media Awards Was So Moving
By Abby Monteil
Stay up to date