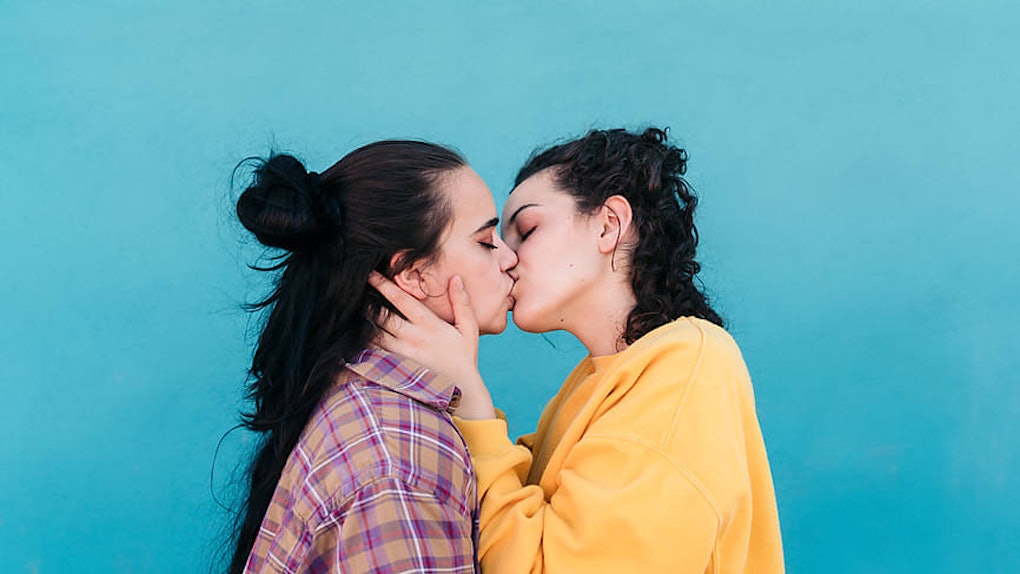 LGBTQ Adults Have More Pride In Their Identities Than Ever, Says A New Study From Tinder

Want some good news for a change? Well then, you are going to love what a recent study conducted by Tinder discovered. With Pride season right around the corner, the folks behind the dating app surveyed 1,000 LGBTQ-identifying people between the ages of 18 and 45 to gauge their attitudes toward their identity in regards to dating and dating culture. The results were honestly pride-worthy, because what this study found is that LGBTQ adults have more pride in their identities than ever before. How beautiful and amazing is that? And that's just the beginning.

According to the same study, its participants believe that things really are getting better — at least as it pertains to the perceived stigma around the LGBTQ+ identity. In fact, 79% (a vast majority), "believe that there is less stigma today around their community than there was five years ago," according to the study. And they have a surprising reason for why they think attitudes toward LGBTQ-identifying folks are changing. Participants credit the changes in attitude in large part to online dating. Yep, that's right — all that swiping left and right may have had you feeling like you were spinning your wheels, but in reality, 80% of the people Tinder surveyed said that dating apps and online dating have actually "benefited their community in a positive way." According to the study, "more than a quarter (28%) say the decrease in stigma has made it easier for them to date (28% of which were Gen Z and 30% were Millennials)."

This all explains why the same study found that 1 in 5 LGBTQ+ folks are opting to come out online rather than in person, and nearly 1 in 3 don't feel like they have to formally come out at all, with "38% saying that formally coming out has become less important due to normalization." Guys, that's incredible! That said, just because they feel that being LGBTQ+ is more normalized, that doesn't mean they are any less proud of their identity. In fact, it looks like the opposite may be true, as evidenced by the fact that, when asked for the number one word they would use to describe their identity, 31% said "proud." I'm not crying, you're crying!

Honestly, these numbers are so encouraging, and a great way to kick off Pride season. Being proud of you who are and who you love is a human right, and the closer we get to everyone believing that, the better the world will be. And every step we take toward achieving that goal is one worth taking pride in.

More like this
Demi Lovato Revealed She’s Pansexual & Says She “Likes Anything, Really”
By Caroline Colvin
JoJo Siwa's Quote About Coming Out As Pansexual Is Full Of Joy
By Corinne Sullivan
Zac Clark & Tayshia Adams Are Wedding Planning & I’m So Pumped
By Lydia Wang
Stay up to date