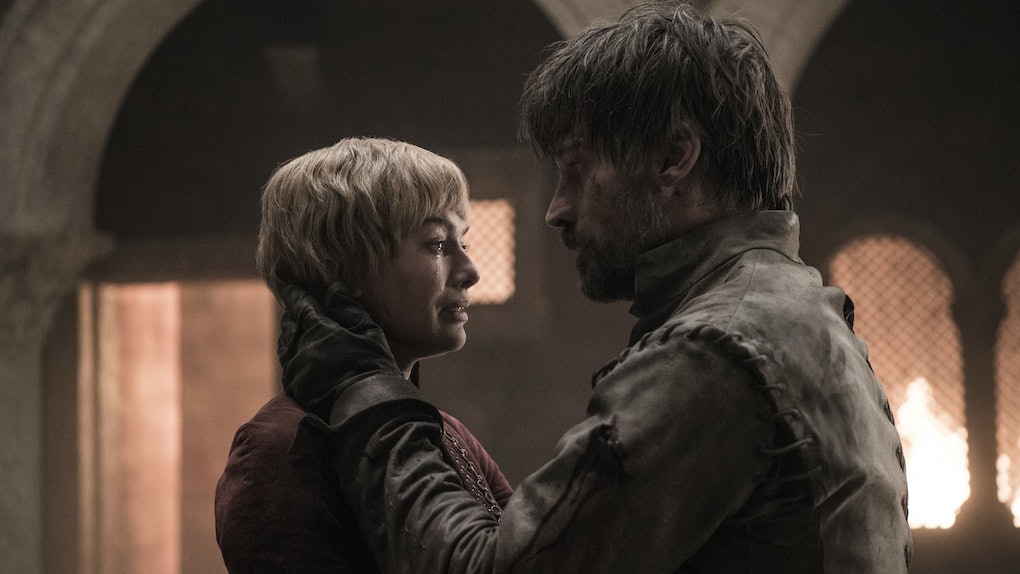 Game of Thrones only has one episode to go before the series is over. As part of the penultimate episode, "The Bells," fans said goodbye to two of the longest surviving characters, the Lannister twins, Cersei and Jaime, played by Lena Headey and Nikolaj Coster-Waldau. The curtain (well actually, the ceiling) rang down on them and their ill-fated attempt to escape King's Landing. They came into the world together, and they left together, as it should be. But fans aren't the only ones in mourning. Actress Lena Headey's Instagram to Cersei is a masterclass in how to say goodbye to a complex character everyone loved to hate.

Cersei wasn't an evil Queen, though in a lesser series she would have been. Most descriptions of the character reduce her to that. However, over the seasons, Headey's performance in the role has given her character depth that a word such as "evil" does not fit. Sure, she blew up the Sept and killed off the entirety of the Tyrell house. Sure, she slept with her brother and passed their children off as the sons and daughters of the king.

She also loved those children desperately, and many times her decisions were about doing what she thought was best, both to keep them safe and to keep them close.

Headey paid tribute to the ten years she spent in the role with a lovely message:

There she goes. It’s been fun, and bonkers. I loved her. I am grateful for the opportunity. Massively thankful for your encouraging and supportive love along the way. And now her watch is ended (I know she’d never make it, Nights watch wouldn’t have her, but still...)

Cersei and Jaime weren't the only one to die in last night's episode either. Both Pilou Asbæk (Euron) and Anton Lesser (Qyburn) met their ends as well, the former at the hands of Jaime and the latter at the hands of The Mountain. Headey posted a tribute video of the three of them hanging out in a tent during a break in filming last year.

This video was taken in between filming from the "Parapet Scene" that closed out Season 8, Episode 4, "The Last of the Starks." As fans will remember, Missandei was also part of that scene, where Cersei beheads her. Headey paid tribute to Missandei with a photo of herself and actress Nathalie Emmanuel.

Beautiful @nathalieemmanuel You represented hope and true strength. I didn’t like that day up there.

But of course, Headey's real partner in the series was always Nikolaj Coster-Waldau. Her behind the scenes photo with him, of both wearing terrible wig caps, is hilarious.

When @nikolajwilliamcw and I wore jellyfish ... I f**king love you ya big weirdo.

It's almost as funny as the one he posted back at her, of both in costume during their final days on set.

The best, sweetest most wonderful sister from another mother @iamlenaheadey. That was a fun decade.

Rest in peace, you Lannisters for Life. And now their watch has ended.