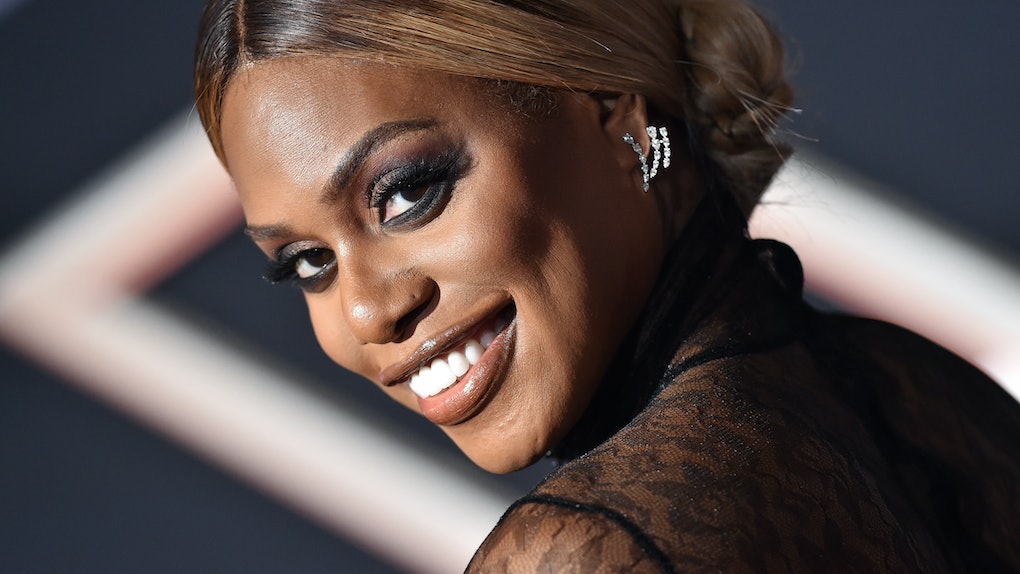 Laverne Cox Wants You To Talk About Your Sex Life — EXCLUSIVE

The first time Laverne Cox became aware of Human Immunodeficiency Virus/Acquired Immune Deficiency Syndrome (HIV/AIDS), she was 10 and living in Alabama. A female friend of her mother's was dying from HIV, but she was just a kid who had barely begun puberty; she didn't know much about the virus. It wasn't until she moved to New York as an adult and made friends who had been directly affected by the disease that she grew passionate about destigmatizing HIV/AIDs through conversation. That's why Laverne Cox says talking openly about sex is so important.

HIV/AIDS is still a global health crisis, killing more young people (ages 15-29) than any other disease worldwide. In 2019, the diagnosis is not only treatable, but preventable. So now, at 47 years old, Cox is partnering BAND-AID Brand and (RED) in honor of World AIDS Day to change the trajectory of HIV/AIDS, once and for all.

"I don’t recall ever having a sex-ed class," Cox tells Elite Daily. "My mother was very frank with me; I was aware of sex and sexuality, I was aware of condom use, but the education did not keep me from internalizing the stigma." The "stigma" Cox is referring to is attached to sex, sexuality, and sexual health — which are still often considered too taboo to openly talk about, both publicly and privately.

Cox maintains that in order to encourage people to engage in safe sex, discussing taboo topics isn't just necessary, but vital. These conversations include an open dialogue about condom use, especially among young sexually active people. In fact, according to Planned Parenthood, "Latex and internal condoms are the most effective way for people who have vaginal and anal intercourse to reduce the risk of HIV and other sexually transmitted infections." Additionally, pre-exposure prophylaxis (or PrEP) can help people who are at very high risk of getting HIV — such as gay and bisexual men and transgender women who have sex with men — to prevent infection by taking a daily pill, and the Center of Disease Control & Prevention (CDC) reports that PrEP reduces the risk of contracting HIV from sex by about 99% when taken daily.

"I’m still amazed at how many people don’t use condoms," Cox says. A 2015 survey conducted by the CDC only further surprises: 23.8% of women and 33.7% of men aged 15–44 used a condom during their last sexual intercourse in the past 12 months. "I remember the first time I had sex, even though a condom was involved, I was so terrified that I was going to get HIV/AIDS. Even though, intellectually, I knew a condom would protect me, I think I’d internalized so much shame about being sexual because I was LGBTQ, so the stigma [connected to HIV/AIDS] persisted."

In addition to condom use, Cox says a discussion about sex-related shame is still missing from sex education curriculum. Cox tells me that growing up, she carried around so much shame connected to her sexuality, particularly as a trans woman who was assigned-male-at-birth (AMAB) that now, though she's a public figure and activist in her own right, she continues to work toward unlearning that stigma. She says discussing shame publicly in schools and the workplace, as well as privately with friends and family, still hasn't been widely normalized.

"Sex is a natural part of being human, right? I think it’s a god-given thing," Cox says. "Talking about being sexual and the stigma around sexuality, especially for members of the LGBTQ+ community, is something that I think we can reckon with more." Cox goes on to tell me that a friend of hers, who's currently in his 60s, recently revealed that it took watching an episode of Ryan Murphy's Pose to finally confront the shame he's carried around about his sexual identity. Part of that process included grieving, a by-product of the intense trauma he experienced as a gay man living in New York during the 1980s, when 47,993 Americans died of AIDS. Cox believes it shouldn't take seeing your experience mirrored back to you on a television program for you to be able to discuss the shame surrounding sex and sexuality that's been ingrained in many of us still childhood.

"How do we give ourselves space to confront and deal with shame?" Cox asks, going on to answer her own question: by talking about it, in sex-ed classes, in therapy, and with friends. "I think we can start to have a conversation about [everything] we’ve internalized and find spaces to talk about it and to heal so that all of our experiences, sexually, are not colored by shame and trauma."

So, what would shame rhetoric in a sexual education class look like? According to Cox, it would unfold in two parts — the first would involve confronting our internalized shame through asking questions, like, "What can being sexual look like? What forms can it take on?" "What can sexuality look like, as a woman?" The second would require acknowledging the universal nature of shame and coming up with actionable tactics to combat shame-powered spirals. "Most of us have [shame], and when we can talk about it, we can create a safe space to name our shame in an environment where that shame can be met with empathy, and then we can begin to build shame-resilience," Cox says. "When we internalize stigma around sexuality, there's a spiraling that can happen, so having spaces that are crucial. I think that it needs to be a part of education. Life is hard enough."

In addition to stigmas attached to sex and sexuality, Cox also encourages people to openly discuss falling in love and dealing with heartbreak with their friends, family, and mental health professionals. After calling it quits with Kyle Draper, her boyfriend of two years, in June 2019, Cox says she relied heavily on conversations with her girl squad and therapist to get her through.

Talking about her girlfriends and the support they've shown her throughout every stage of her breakup makes Cox emotional. She says finding the right people to have these conversations with has been pivotal and life-changing.

"I’m crying now thinking about how amazing my girlfriends are, and the support we have been able to give each other," she says. "It’s incredible. [All you need is] a good therapist and a good group of girlfriends, who will love you no matter what, who see you. And to take your time. Your body will heal; your nervous system will heal. It takes as long as it takes."

Healing is true of taboo, too. As long as conversations surrounding sex, love, and shame remain taboo, Cox will combat that stigma by talking about her own sex life and participating in activism. Her partnership with BAND-AID and (RED) for World AIDS Day on Sunday, Dec. 1 is a reminder of all the work that still needs to be done to fight prejudice and improve the education system.

When I ask Cox where she's planning to wear her BAND-AIDs, she laughs. "I’m going to surprise you," she says. It looks like the sexual education system isn't all that Laverne Cox plans on mixing up.