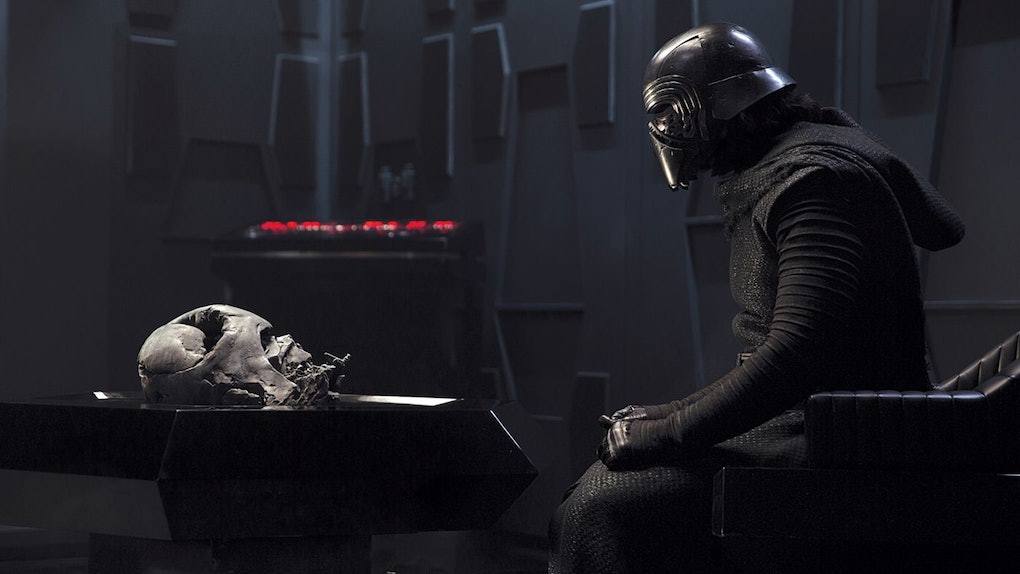 Star Wars: The Force Awakens brought in $2 billion at the box office when all was said and done, with fans lining up to see it multiple times in the theater. But despite those numbers, parts of the story were clunky in their telling, such as the reveal that Kylo Ren was the son of Han Solo and Leia Skywalker Organa. Still, fans gasped when Kylo Ren's real name in Star Wars was finally revealed, and Han called out to him: "Ben!"

For those who were never that big into the Star Wars expanded universe novels and comics, the discovery that Han and Leia named their son Ben probably elicited an aww or three, as audiences realized they named him after good old Obi-Wan Kenobi. But the name "Ben Skywalker" is one that was already part of the original Star Wars canon. That is, he was a part of the expanded universe canon that was approved by Lucasfilm, back before it was bought by Disney, and the last thirty years of novels that covered the story of Episodes VII, VIII and IX were invalidated.

Not that Disney didn't have a good reason for wiping the slate clean. Since they were now going to make Episodes VII, VIII and IX themselves, having sanctioned novels that contradicted the new versions would never do. But fans hoped at least a few of the characters they loved might survive to appear on screen.

So, who was Ben Skywalker, before he was refashioned to become Ben Skywalker-Solo? He was the son of Luke and Luke's wife, Mara Jade. Leia wasn't the one who would name her son after Obi-Wan — she and Han barely knew the guy. Luke, on the other hand, would totally name his kid after his first mentor.

Ben was born to Luke and Mara Jade during the Yuuzhan Vong War, which both his parents fought in. (Mara Jade was also a Jedi.) Since they were both gone for long stretches, he spent many of his formative years living with Han and Leia. He was strong in the Force from the very beginning, and by the age of 8 was taken under the wing of his cousin, Jacen Solo, who informally trained him. During the Second Galactic Civil War, Ben, now 13, joined the Galactic Alliance Guard, which Jacen was the head of, in order to fight.

Unfortunately, Jacen had secretly turned to the dark side, and revealed himself as Darth Caedus, but not before murdering Mara Jade and taking over the Galactic empire. Devastated, Ben followed his father into exile.

One of the first things Disney did upon rewriting the Star Wars future was cut Mara Jade. Lucasfilm had been resistant to her from the beginning (Jedi are not supposed to marry), but gave in when novelist Timothy Zahn kept pushing for her.

With Luke having no longer married (at least as far as we know), Ben Skywalker now became the child of Han and Leia, instead of their nephew. Note though, the original Ben Skywalker was a good kid who had his heart broken when the older cousin he adored turned to the Dark Side. Now, it's Ben himself who is doing the turning.

In fact, what fans who read the novels have noticed is that Ben Skywalker-Solo hits many of the same notes as Jacen Solo. The storyline is completely different, of course, but the over-arching plot points — including taking over what remains of the Empire, betraying Luke and killing those he loved, followed by Luke going into exile — are the same.

That's why some believe that Rey will turn out to be a Skywalker as well. Though Ben Solo seems to have been an only child, Jacen was a twin. His sister, Jaina, was a superbly gifted Jedi who took to the lightsaber like a duck to water, and an ace pilot as well. Sounds a lot like a certain girl from Jakku that we know.

How many small details will the final trilogy in the Skywalker saga continue to pull from the dozens of now-defunct novels? Only time will tell.

More like this
TikTok's #NotTheMainCharacter Trend Shows The Supporting Role You Connect With Most
By Marisa Casciano
‘My Policeman’: Release Date, Cast, Trailer, Plot, & More Info
By Abby Monteil
Who Will Play The Fantastic Four For Marvel? Twitter Has So Many Ideas
By Dylan Kickham
Stay up to date