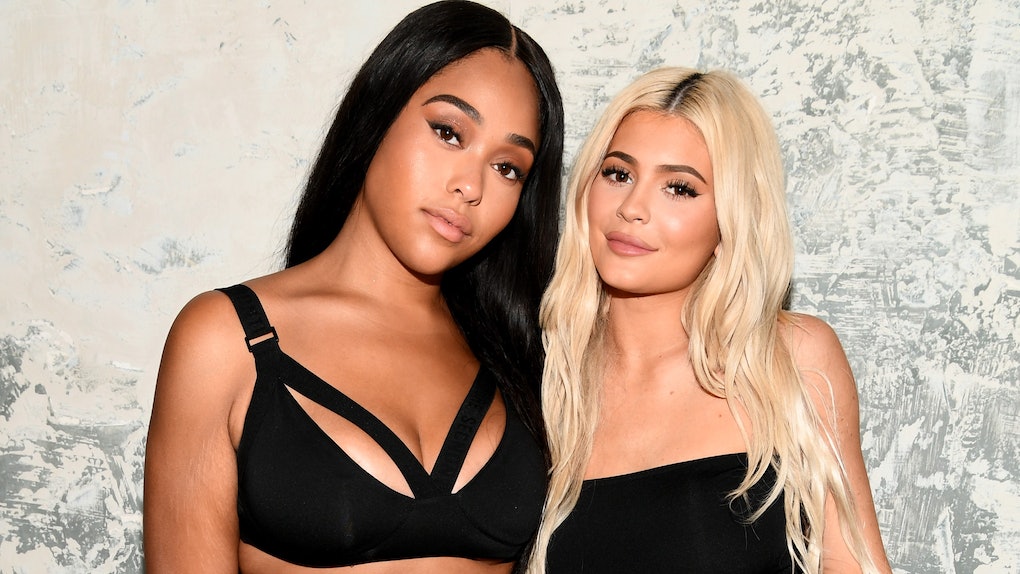 It’s been just about a month since news broke that Tristan Thompson and Kylie Jenner’s BFF Jordyn Woods allegedly hooked up. Elite Daily reached out to Thompson and Woods' teams for comment at the time but did not hear back. Sources reportedly close to the situation are starting to reveal what happened behind the scenes. In a new report from Us Weekly, a source claims that Jenner had a rather sad reaction to the situation. Kylie Jenner’s reaction to the Jordyn and Tristan scandal also reportedly affected the filming of Keeping Up With the Kardashians.

In Us Weekly’s report, a source close to the Kardashian-Jenner family revealed that the scandal was so intense for Jenner that she had to take a break from filming the reality show. Elite Daily reached out to Jenner’s team regarding the report, but did not hear back by the time of publication.

“Kylie took a little break from filming Keeping Up With the Kardashians and recently got back into filming and it’s been a struggle and difficult,” the source told Us Weekly. “She was very upset about the situation with Jordyn and also just didn’t want to deal with it and have to address it.”

That is most definitely a reasonable reaction to a situation where your best friend and your sister’s ex-boyfriend are caught up in a scandal.

As you probably know by now, Jenner and Woods’ friendship has been put on the back burner for right now. Woods reportedly moved out of Jenner’s house and Jenner is apparently seeking out other friends at this time. Elite Daily reached out to Jenner and Woods' teams for comment on the reports but did not hear back. All in all, it’s a sad situation, especially since Jenner and Woods have been inseparable for just about six years. So, it’s easy to see why Jenner was so deeply upset about the situation.

When the scandal was just unfolding back in February 2019, Us Weekly reported that the KUWTK cameras were definitely capturing all the behind-the-scenes drama.

“Because Keeping Up With the Kardashians is currently in production, cameras are capturing the situations as it unfolds,” the source said at the time.

A source also told the outlet at the time that Jenner was struggling with what happened between Thompson and Woods and how she needed to handle it.

“Kylie defended Jordyn in the beginning,” an insider told Us Weekly. “At first the family thought Kylie would eventually take Jordyn back, but now they don’t think she will.”

As I previously mentioned, Jenner’s friendship with Woods is on the back burner for right now, but that doesn’t mean they won’t reconcile in the future. According to a March 8 report from People, a source claimed that Jenner and Woods are still working on their friendship. Elite Daily reached out for comment at the time but did not hear back.

“Their friendship is not 100% over,” the source said. “Although she doesn’t live at Kylie’s, Jordyn still has things there. She and Kylie aren’t socializing, but are in contact. They are texting each other.”

People’s source also claimed that Jenner was still figuring out how to handle all this, but that her family was supportive.

“It’s still a tricky situation for Kylie. And no one is actually putting too much pressure on her,” another source told People. “Her family is aware that she is in contact with Jordyn. They are letting Kylie figure things out for herself.”

All in all, it’s a complicated situation, but Jenner seems to be handling it just fine.

More like this
Brody Jenner's Reported Reaction To Caitlyn's Run For Governor Was Not Supportive
By Brandy Robidoux
Kaitlyn Bristowe & Jason Tartick Are Engaged & Their Proposal Story Is Cute AF
By Rachel Varina
'Unidentified With Demi Lovato': Peacock Release Date, Cast, Trailer, & More
By Ani Bundel
Stay up to date