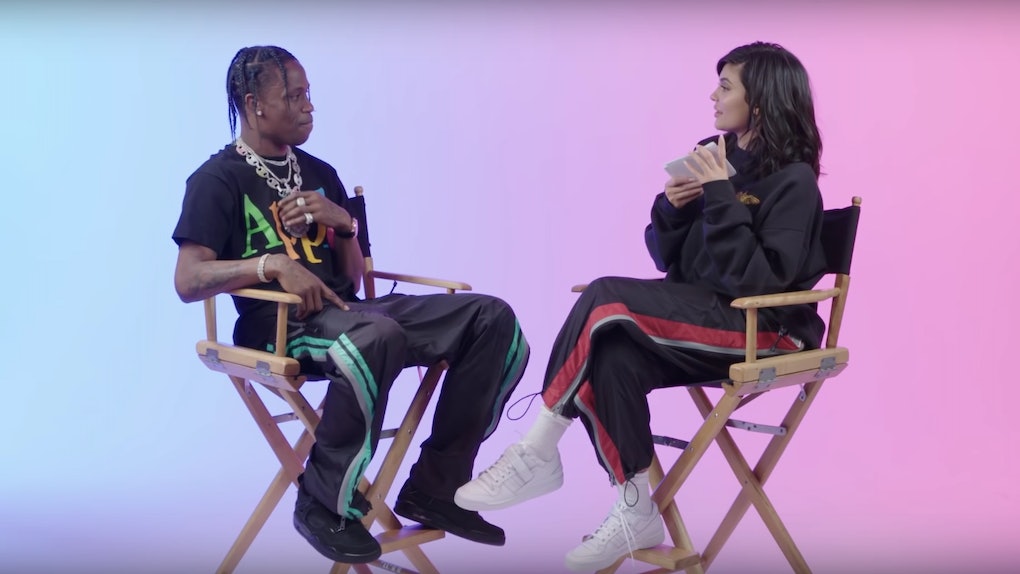 In addition to being new parents who seem to be totally in love, Kylie Jenner and Travis Scott are also gracing the cover of the most recent GQ magazine. You know, as most new parents tend to do. The cover features a scantily clad Jenner looking sexier than I've ever seen any mortal human look as she drapes herself on her bae's lap. Along with the article, GQ also filmed Scott taking a "Kylie Quiz" to see just how well he really knows her. As it turns out, Kylie Jenner and Travis Scott’s body language in GQ's video tells us way more than what they're actually discussing.

Before we get to the body language, let's briefly talk about what it is that they're discussing. To put it quite simply, despite his final score of (spoiler alert) 20/23, Scott doesn't seem to know some basic facts about the mother of his child. He simply scoffs when she asks where she puts her highlighter on when she does her makeup, but OK, we'll give him that one. He only knows the names of one of her four dogs. (Yep, just one! Can't give him that one.) He also doesn't remember what sport she played other than track. That being said, they agree to disagree on whether flag football and cheerleading actually constitute as sports.

He does know her body pretty freaking well, considering he was quickly able to say that her biggest scar is on her left leg. But, then again, the heart tattoo on the back of her arm totally seems to slip his mind. He does manage to ace a lot of questions, like how many cavities she's had, what her middle name is, what her favorite pregnancy food was, and her favorite color.

I'll let you watch the rest for yourself here:

After watching the video, you feel like you really know the couple just based on their words, but we asked Traci Brown, body language expert and author of Persuasion Point: Body Language and Speech for Influence, to also share what she can gather about them, based on their more ~physical~ interactions throughout the video. Here's what she tells us.

Just because Travis looks calm, cool, and collected doesn't mean that he is.

"What we see from him is, he’s draped over the chair, his legs are spread way out which says 'hey, I own this place, I’m cool,'" explains Brown. "But then, do you notice how his one finger is over by where his mustache is? That says that he’s a little nervous."

Deep down inside, he knows who runs the show.

"He’s carefully considering all of his answers before he says them because maybe there’s some ramifications with the wrong one," she says with a laugh. "There’s a little bit of a dichotomy there."

"I think that he wouldn’t have that dichotomy that he showed if he really was in control," Brown continues. "There’s just a little bit there that says this answer has some gravity to it. It’s not just about what are the dogs names, right?"

... Even though he may want to be the one calling the shots.

"He wants to be in control but he knows that, 'wait a minute, she’s actually probably in control,'" Brown deduces.

Kylie really is as nice and fun as she seems.

"She’s just having a good time and being [the] sweet, cheery, bubbly girl that she is," Brown notes.

She knows how to make her man squirm a little.

When we see Jenner raise her eyebrows every once in a while, Brown notes that's an assertion of her power over him. "I think part of her wants to put him on edge just a little bit to let him know that she actually is the one in control," she laughs. "It’s kind of fun."

"I think they’re just having some fun for their fans and, you know, he had his head right in her chest so I think there’s sexual attraction there," she notes.

"She went and sat in his lap, and so I think there is love there," Brown adds.

For any of you haters, there's no trouble in paradise here.

"They’re fine," Brown concludes. "There’s not any trouble in their relationship and they’re just having a good time together."

Yay for the happy couple! They're doing just fine, you guys.