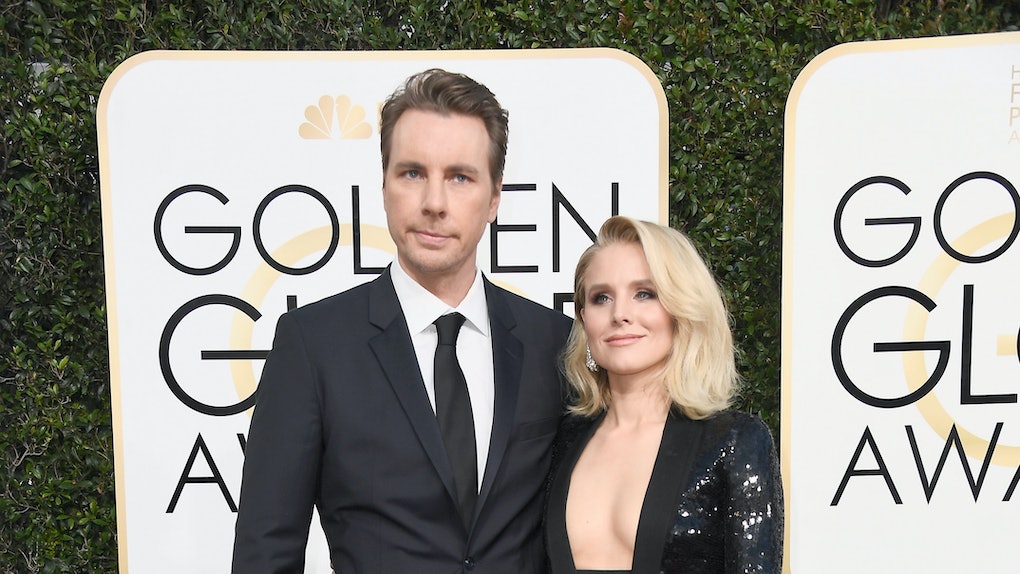 Kristen Bell is totally unbothered by rumors that her husband Dax Shepard cheated on her all the way back in 2009. And she made sure everyone knew it with a new post to Instagram. Kristen Bell’s photo kissing Dax Shepard shows that their marriage is still going strong despite those pesky cheating rumors.

In Bell’s Instagram photo, you can see her and her husband sharing a smooch while attending the Lantern Art Festival at the Los Angeles Arboretum. Although the photo doesn't directly address the cheating rumors floating around, it at least confirms the couple are on a kissing-for-the-'gram level of intimacy in spite of all the nasty rumors.

The cheating rumor in question here is one initiated by The Daily Mail. In a Dec. 13 report, Kayti Edwards, who happens to be Julie Andrews’ granddaughter, claimed that she and Shepard were intimate in 2009, two years into Shepard’s relationship with Bell.

After reportedly meeting at a party, Edwards claimed that she and Shepard “went back and made love, we had sex twice and he stayed until the next morning.”

According to the report, Edwards claimed that she wasn’t aware Shepard had a girlfriend at the time. Additionally, she revealed some personal, but mostly flattering details about her time with Shepard.

“I didn't know he had a girlfriend at the time, he didn't seem to care,” Edwards continued. “He makes you feel comfortable and he's not one of those, you know, standoffish celebrity guys. He's just a normal person, but he's funny. I was attracted to his confidence. It was just a brief thing, we would hook up here and there, but we had a little friendship when we saw each other,” she said.

So, all this is what Bell was seemingly responding to with her Instagram post. If you haven’t seen the sweet photo she posted of her and Shepard sharing a kiss, have a look at it down below:

Clearly, Bell feels totally secure in her relationship. And why shouldn’t she? Shepard dispelled the rumors himself with his own Instagram post. Just a day after The Daily Mail’s report went live, Shepard took to Instagram to say that it was fabricated, claiming Edwards has a history of selling stories to tabloids.

“Hey Daily Mail, that photo is 13 years old, not 9,” Shepard said of photos of he and Edwards kissing. “Also, Kayti has sold stories to tabloids about Matthew Perry, Jack Osbourne, Kid Rock, and now me. I look forward to her next one. Fingers crossed it’s about my #1, Brad Pitt :).”

As touchy a situation as this is, it looks like Bell and Shepard are handling it with the kind of finesse you’d expect from them. In October 2018, the two stars handled another unusual report in a similar fashion. When Star contacted them for comment on their sex lives, Shepard went from 0 to 100 real quick.

“The only offensive thing about this bullsh*t story is that @kristenanniebell isn't doing all this kinkiness out of horniness, but rather a desperate attempt to save her marriage,” Shepard wrote on Instagram. “I think we all know Bell is a lot more gangster than that. I'll now give you until 4PM to comment, Star.”

So, this is all par for the course for this happily married couple!