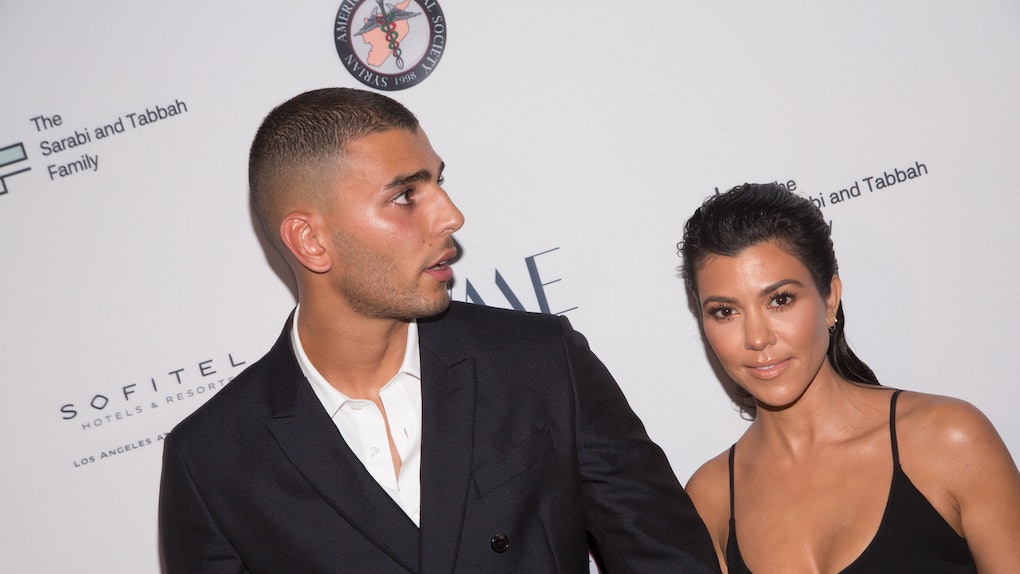 Is Kourtney Kardashian gearing up to rekindle a romance with Younes Bendjima? No, but fans who might’ve spotted them out together recently could have easily thought so. Kourtney Kardashian ran into Younes Bendjima while both were out on a coffee run and they reportedly had a lovely time catching up. According to a report from E! News, the spent a few minutes chatting before parting ways. Elite Daily reached out to Kardashian's team regarding the report, but did not hear back by the time of publication.

"Kourtney bumped into Younes getting coffee at Alfred. It wasn't a planned meet up," the source told E! News. "She goes there often and so does he. She was happy to see him and very nice. It wasn't awkward for her and they chatted for a few minutes.”

The source also revealed to E! that Bendjima bought Kardashian a latte because he was ahead of her in line, which is really sweet.

“It was sweet and she appreciated it. She gave him a hug and went on her way," the source said. "He texts her from time to time but she has moved on. It was nice to see him and she was glad to see he's doing well."

So, it seems like there are no hard feelings between Bendjima and Kardashian, which is really nice to hear. The two dated from October 2016 until August 2018. In the last few months of their relationship, things became somewhat strained between them. In July 2016, Bendjima seemed to be upset about what photos Kardashian posted on social media, especially ones that revealed too much skin.

"That's what you need to show to get likes?" he commented on one of Kardashian’s Instagram photos.

Kardashian was reportedly frustrated by his behavior, which only added to the difficulty of the relationship. At the time, a source told E! News that Kardashian didn’t appreciate Bendjima’s impulsive nature:

So, there were definitely some problems in the relationship, but it’s nice to see that Bendjima and Kardashian have moved past them. As a matter of fact, Bendjima shared a very sweet message about Kardashian on Instagram while reflecting on 2018 back on Dec. 30.

"Let's not forget this beautiful woman inside and out," Bendjima wrote alongside photos of Kardashian. "I'm not the type of man that forgets moments like that. You [are] an amazing woman and mum and I hope you will find happiness for you and your childrens [sic]. It's all love at the end of the day...we don't know what can happen tmw so there you go."

Bendjima clearly has a lot of respect for Kardashian, and it seems like the feeling is mutual!