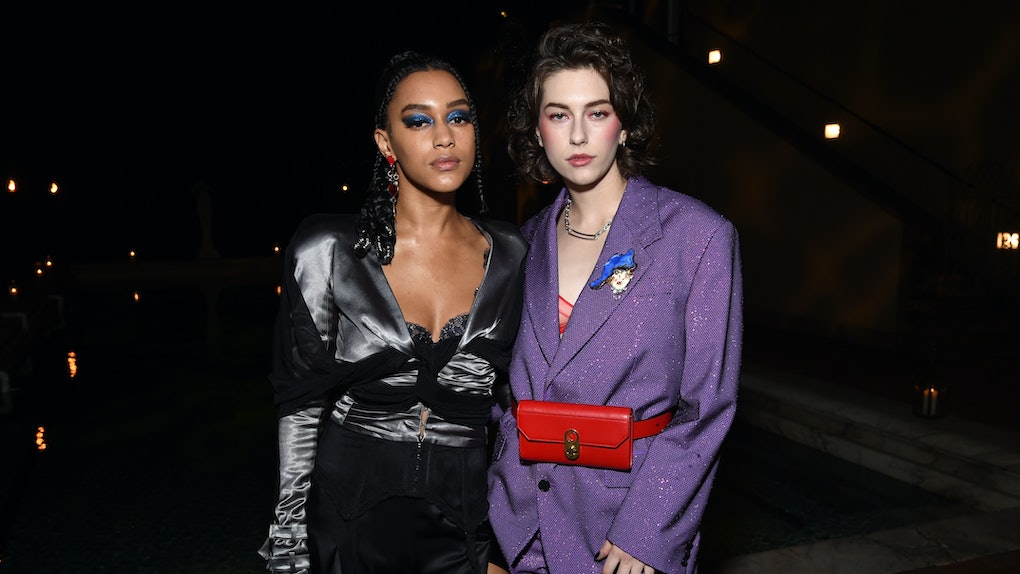 Mikaela Straus (better known as King Princess) and her creative director boo are the celebrity couple I never knew I needed in my life. Not only do they post tons of cute pics together on Instagram, but they also support each other in the best way possible, which is why King Princess and Quinn Wilson's relationship timeline is like a fairytale. And like so many other iconic celeb relationships, it all began when the pop star slid into Wilson's DMs after their first meeting. Luckily, the attraction was mutual.

Most recently, the couple was featured in GQ's "Modern Lovers" issue in March 2021, and in their interview, they opened up about their sweet love story. "There have been some big highs and lows in our relationship, and we're still functioning at the same baseline of love and respect for each other," Wilson explained. "I feel like we have an emotion, we're really intense and get it out, and then it dissolves." She even added, "I love Mikaela so much it's painful. She's my best friend." Swoon.

It's clear to me these two are the real deal, so let's take a look back at their dating timeline, because IMO, they're a couple not nearly enough people appreciate.

It sounds like sparks were flying from the moment Wilson and Straus first crossed paths during a meeting. "I thought I was going to have another client meeting," Lizzo's creative director explained to Vogue UK during a June 2020 interview. "I didn't realize that this exchange was romantic."

It wasn't long before Straus decided to slide into Wilson's DMs with a simple message: "I love your work." According to their GQ interview, Wilson then replied, "Hi, Miss King," though she insists she "was not flirting" with her response. After chatting on Instagram for a while, the two decided to meet IRL at a small restaurant in Silver Lake, Los Angeles.

Straus reflected back on that first DM in a February 2021 IG posted in honor of Valentine's Day. "Been all around town together and I still can't get enough of ya," she wrote. "I love ya baby thanks for replying to my DM two years ago. You're so hot!!"

They Made Their Red Carpet Debut In December 2019

By September 2019, the couple was Instagram official, and a few months later, they made their red carpet debut at the premiere of Showtime's The L Word: Generation Q. Unsurprisingly, they looked 🔥 together.

They Began Quarantining Together In March 2020

After just about a year of dating, the ongoing coronavirus pandemic broke out in the U.S. in March 2020, and Straus and Wilson decided to quarantine together. Apparently, it was a bit of a challenge initially. "Being in quarantine is the longest amount of time we've spent together. This is the first time that we have had a combined household — it's been an experience!" Wilson explained to Vogue UK during their June 2020 interview. However, it seems the experience only made their bond stronger.

Their relationship became further strengthen by the Black Lives Matter movement. "This has added an extremely complicated additional layer on being together," Wilson said. "We've been spending a lot of our time learning. I think [Straus has] been doing a really incredible job of being an ally and a partner to me during what is a really painful and traumatic time."

Straus added, "I, as a white person, am upset and motivated by this movement. But also, there is a person that I love who is affected by this in ways that I can only begin to comprehend. I'm not going to be that white partner that is uncomfortable and feels helpless and silent. I want to be the white partner who is there and is the first person to be like, 'Oh, do you want to go home and get on the streets? Let's do this.' I'm in this for you and all the other Black and brown people who need white support."

They Collaborated In December 2020

In December 2020, Straus released the official music video for "PAIN," which Wilson directed, marking their first major creative collaboration. "I think that the way we work together is symbiotic," Straus told GQ about working with her boo. "It's a true partnership."

Wilson also noted how great it was to work with Straus on the project. "Feeling real good from everyone's kind words about the video," she wrote on Instagram in a December 2020 post. "Working with people you love is fabulous and terrifying all at once. It means a lot to me that you're all digging it. Love you, KP."

These two are the true meaning of couples goals, and like most of their fans, I hope they stay together forever.