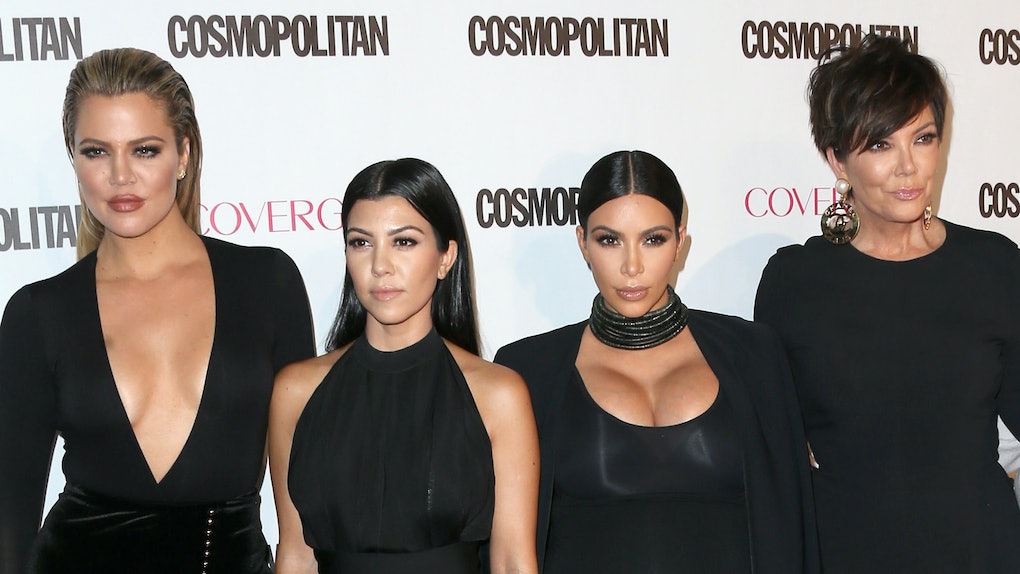 It's been 16 years since the patriarch of the Kardashian family, Robert Kardashian, lost his battle with esophageal cancer, and Kim, Khloé, and Kourtney Kardashian's Instagram tributes to their dad on the anniversary of his death hit me right in the feels as they reflected on the memory of their late father. On Sept. 30, Kim kicked off the series of messages in honor of their father with a throwback photo of herself and Kourtney kissing him on the cheek.

"Miss you dad. Can’t believe today would be 16 years since you went to heaven," Kim reflected alongside the sweet snap on Instagram.

Khloé took to the comments section of her big sis' post to share, "This is such a beautiful photo! I miss him every day!"

Kourtney got me teary-eyed with a caption noting that saying she misses him so much "doesn’t begin to describe" her feelings. She later showed off a piece of artwork by Romero Britto that mirrors the image of Robert in a colorful suit.

As if that wasn't enough, scrolling through Khloé's Instagram Story, I spotted a subtle nod to Robert and their heritage as she showed off an old cookbook titled Treasured Armenian Recipes.

Robert was only 59 years old when he died on Sept. 30, 2003, just eight weeks after receiving his cancer diagnosis.

The businessman was married to Kris Jenner from 1978 to 1991, and despite their divorce, the pair remained close for their daughters and son, Rob. While Kris didn't express herself on social media this year, she's previously mourned the loss of her ex publicly.

On what would have been Robert's 73rd birthday in February 2017, the momager shared a heartbreaking message.

"There's not a day that goes by that we don't miss you. Forever grateful for the love you gave, the lessons you taught the kids, and the memories we shared," Jenner captioned a family pic on Instagram. "Missing you always. I am so blessed to have had you in my life and I cherish every single memory. I love you. Happy birthday Robert."

The famous family keeps the memory of Robert alive not only for themselves, but for the nine grandchildren of his that he never got to meet.

Kim shares four kids — North, Saint, Chicago, and Psalm — with her husband Kanye West, while Kourtney is mom of Mason, Penelope, and Reign, whom she shares with ex Scott Disick.

Khloé shares daughter, True, with her ex Tristan Thompson, and Rob is dad of Dream, his daughter with Blac Chyna.

Fans of Keeping Up With the Kardashians will recall many trips to an Armenian restaurant called Carousel in which the sisters frequent while sharing stories about their dad. It's a local Hollywood hot spot in which Robert used to take them when they were little.

Earlier this year on KUWTK, Kim opened up about a meeting with a fortune teller in Bali who shared some details about her newborn baby that had to deal with Robert.

"He told me I’m going to have another son [and that] it’s going to be my dad reincarnated," she told Disick about the experience at the time.

My heart goes out to the Kardashians at this time.