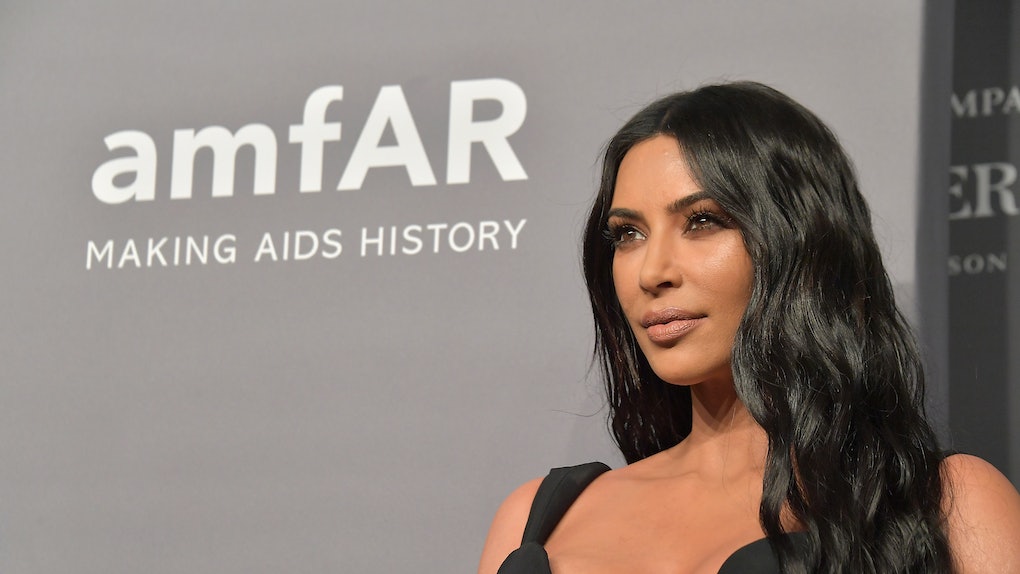 If you think you've seen the best photo to date on Kim Kardashian's Instagram page, well I've got news for you. The mother of four's latest post is the cutest thing you'll see, ever! *Rushes to open Instagram.* But really, Kim Kardashian's photo of Psalm and Saint West is just too adorable.

In the gray-scale snap captioned "My boys," Saint lovingly cups his baby brother's head while mom watches on with a smile. Mom is all of us. At the very young age of 3, Saint is already showing off some serious older-brother love and I'm here for it. I'm also just very excited to see Psalm since he has made very few appearances since his birth on May 17.

But seriously, Kardashian has kept baby Psalm out of the limelight, which I understand, but he's so cute and I just want to see more of the little guy. At least today, the little 1-month-old blessed our 'grams and warmed our hearts. Amen.

In total, this is Psalm's third appearance on social media. In another photo that lives on Twitter, Kardashian announced the bouncing baby's name above a photo of the little angel wearing a tiny beanie, snuggled in a white onesie. Cuteness level on 100 folks.

Be still, my heart.

Then there was his second appearance and it was truly a gift. The photo was a close-up of the sleeping angel and I'm still dying inside because he just looked so precious. His arm was positioned under his cute little bald head like he was posing.

The photo, posted on June 10, was captioned on Twitter as "Psalm Ye" which is probably a joke since Psalm Ye rhymes with his dad's name, Kanye.

As for his first name, well, it kind of set the internet ablaze with many wondering how to pronounce it. Like, "Psalm," the book of the Bible? Turns out that guess was right. Grandma and momager Kris Jenner revealed he was in fact named after the Book of Psalms.

In an interview with Entertainment Tonight, Jenner said, "The inspiration was the Book of Psalms in the Bible. I think it's just a wonderful way to celebrate how they feel. And he's such a blessing, so it's perfect. He's just adorable." That he is.

The biblical root of Psalm's name also seems to be closely linked to Kanye's very public walk with God. The rapper hosts his own weekly worship sessions called Sunday Service in which he and a choir perform gospel-versions of his songs.

A source close to Kanye told People Ye's Sunday Service is a means of spreading the word: “He is extremely passionate about his faith and wants to share it more regularly with people. He spends a lot of time studying and praying, and wants to share his journey.”

Aww, if it's to help the greater good then I'm down. But just wondering, does this mean we can get more sweet photos of Psalm West on the 'gram? Because if so, more blessings, please!

More like this
Khloé Kardashian's Response To Her Unretouched Bikini Photo Leaking Gets Honest
By Brandy Robidoux
Khloé Kardashian's Twitter Likes Before Her Unretouched Photo Leaked Reveal A Lot
By Sydney N. Sweeney
These Tweets About Jimmy Fallon's TikTok Dance Follow-Up Segment All Say It's Too Little, Too Late
By Brandy Robidoux
Stay up to date