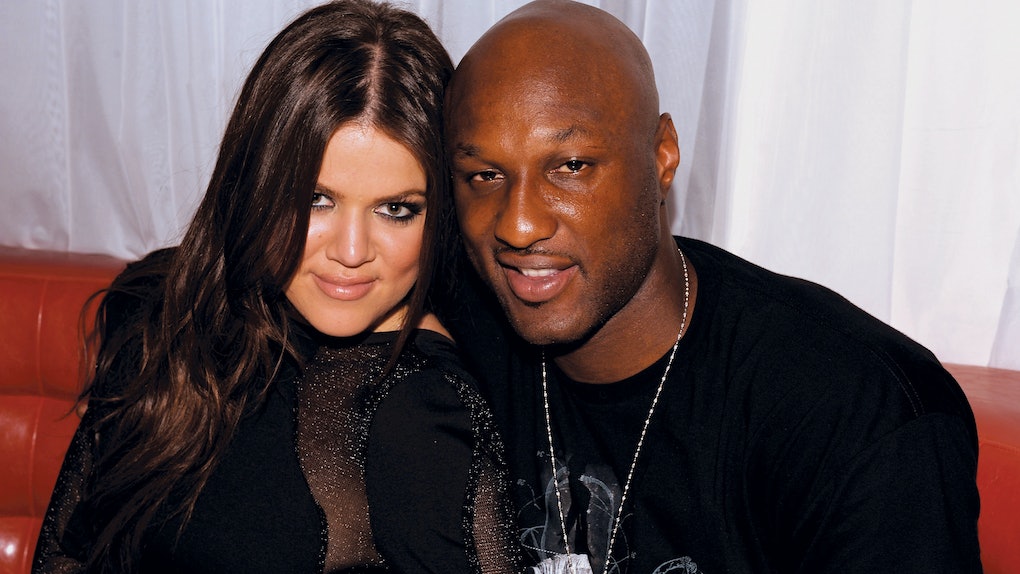 Finding out your ex has officially moved on is never easy, but Khloé Kardashian's reported reaction to Lamar Odom and Sabrina Parr's engagement sure makes it look like it is. A source reportedly told Us Weekly on Nov. 12 that Kardashian, who apparently heard the news from friends and wishes her ex and his new bride-to-be “nothing but the best.” In fact, Kardashian reportedly just “wants him to be happy.” Elite Daily reached out to Kardashian's reps for comment on her rumored reaction but did not hear back in time for publication.

Kardashian is reportedly totally unfazed by her ex's seemingly quick engagement. According to Us Weekly's source, Kardashian “isn’t surprised Lamar quickly got engaged.” I mean, to be fair, Kardashian did say yes to marrying Odom just a month after meeting him in 2009. So, yeah, I think it's safe to say moving fast is on brand for Odom.

Odom announced the news of his engagement on Instagram Nov. 12 with a picture of himself and a ring-clad Parr out at a restaurant. In the caption, he wrote:

Introducing my new fiancé!! Soon to be Mrs. Parr-Odom. She the ONE!!!! @getuptoparr

Parr also took to Instagram the same day to announce the news to her followers with three separate images of her massive pear-shaped diamond engagement ring. In her caption, she simply wrote:

"Lamar, Sabrina, Nene Leakes and her husband are currently celebrating the engagement at Prime 112 in Miami," an insider reportedly told E! News of the special night on Nov. 11. "The group enjoyed dinner and desert and a champagne toast is going to happen shortly."

While it's unclear when the two officially started dating, rumors of their romance first started swirling about only three months before their engagement.

Odom opened up about the demons he faced in his marriage with Kardashian in his memoir, Darkness to Light.

“At the start of our marriage, I was faithful to her,” he wrote, noting that things started going downhill as more of his vices came to light.

“I could not handle the lethal cocktail of the spotlight, addiction, a diminishing career and infidelity,” he continued. “Oh, did I mention the paranoia, anxiety, depression … I couldn’t keep my d*ck in my pants or the coke out of my nose. Drug addicts are incredibly skilled at hiding their habit. I’d get defensive and Khloé would just drop it.”

In an interview with People in May, Odom admitted he wishes he did things differently in his relationship with Kardashian. “I wish I could have been more of a man,” Odom told People. “It still bothers me to this day. But regret is something we have to learn to live with.”

Luckily, it looks like Odom is getting another shot at love with Parr!