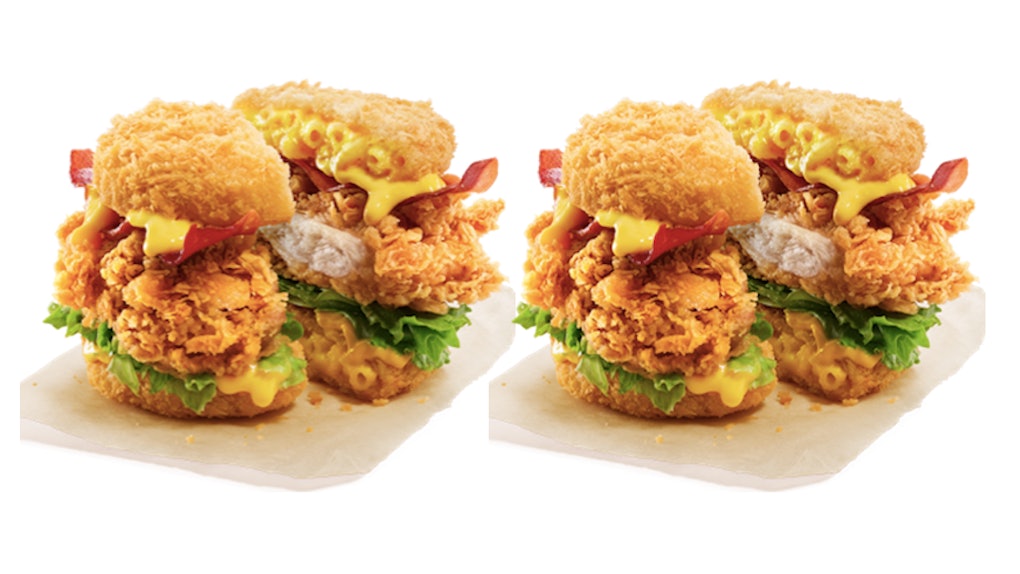 Aside from seeing local sights and getting the chance to experience life in an entirely different country, one of the greatest parts of traveling abroad is having the opportunity to peruse all of the local fast food menus. I know it sounds wild, but I always make sure to pop my head into restaurants like the neighborhood McDonald's, Burger King, and KFC to check out all of the unique and interesting foods they offer. In my opinion, though, one of the most notable international staples has to be KFC Singapore's Mac 'N Cheese Zinger sandwich. It might actually be the comfort food of my dreams.

If you've ever taken a few weeks off to travel to Southern Malaysia, hopefully you got the chance to stop into a local KFC. One of their latest and greatest menu items is called the Mac 'N Cheese Zinger, per Delish, and let me tell you, it's making me seriously consider taking that 24-hour plane ride from New York City. According to KFC Singapore's website, the Mac 'N Cheese Zinger, which was released on Feb. 13, consists of a KFC Zinger chicken fillet, turkey bacon, lettuce, and cheese sauce, according to the KFC Singapore website. All of that is delicately sandwiched between two crispy mac 'n cheese patties, and to be completely honest, it is the comfort food of my dreams. And luckily for those in Singapore, they're here just in time for the most romantic day of the year: Valentine's Day. Nothing says "I love you" quite like deep-fried everything.

Alright, I'm well-aware of the fact that this daunting flight situation across the world will probably be relatively pricey for all of you, but luckily, it won't cost you too much once you step into that highly anticipated international KFC. According to Channel News Asia, the Mac ‘N Cheese Zinger is priced at S$7.50 (about $5.52 USD) and for S$8.95 (about $6.59 USD), you can get a medium sized "whipped potato" (presumably mashed potatoes) along with a regular Pepsi with your Mac ‘N Cheese Zinger Meal. It's a pretty solid deal, so it goes without saying I'll be living on these once I arrive.

This meaty delicacy became available at all Singapore KFC outlets except the one at the Singapore Zoo as well as Kidzania starting on Feb. 13, according to Channel News Asia. However, if you actually plan on making the trip for one of these, you will definitely want to make it quick. Sadly, the highly anticipated Mac 'N Cheese Zinger will only be available while supplies last, so you really don't have too much time. I might honestly buy out their entire stock before you can even book your flight.

Traveling abroad is really fantastic for a multitude of reasons, but if you know me at all, you're probably somewhat aware of the fact that I'm almost entirely in it for the food. KFC Singapore is currently offering one of the most irresistible sandwiches to mankind, so it goes without saying that Malaysia is — without a doubt — my next travel destination. Singapore, here I come.

More like this
Smirnoff's Summer Of 2,021 Dreams Giveaway Includes Free Flights & Bucket List Experiences
By Lara Walsh
Mother's Sparkling Mythical Creature Cookies With Unicorn Shapes Are Majestic AF
By Cianna Garrison
Winc's Summer Water Societé Rosé Subscription Is Back For 2021, So Bring On The Wine
By Cianna Garrison
Stay up to date