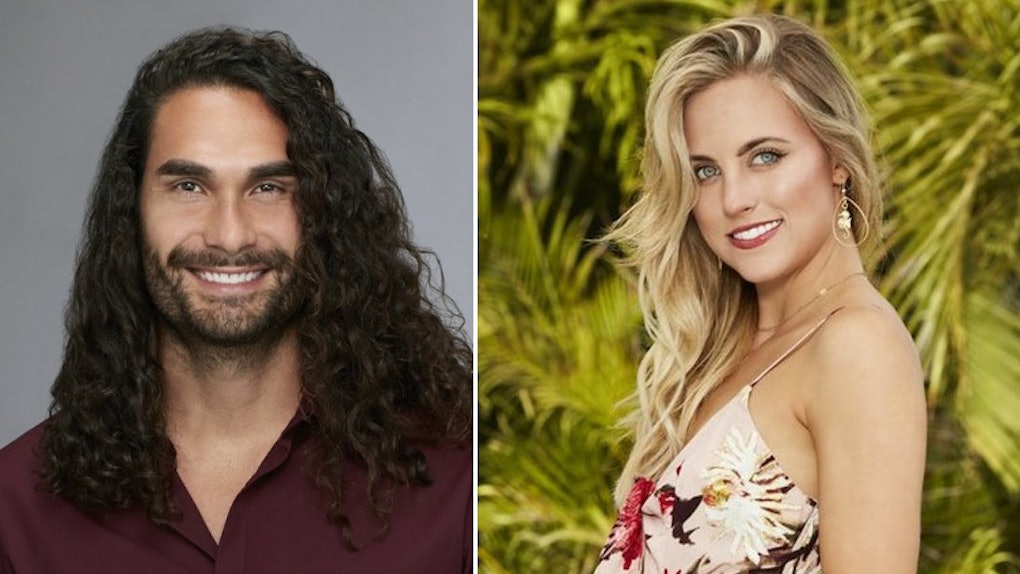 Basically, here's what happened: Leo came down those stairs, made a beeline for all the blondes in paradise, and basically set his sights on Kendall. As you can imagine, Joe wasn't happy at all. While Chris and Jordan were trying to keep his spirits up about the whole thing, you could tell he was totally devastated by the prospect of Kendall moving on to Leo.

While Joe was stressing about Leo's threat to his relationship, Kendall was totally open to it and even agreed to go on a date with the long-haired Adonis.

Leo and Kendall's date was basically a cringe-fest. Jorge the bartender turned up and asked Leo and Kendall to pose for some photos he was taking for his romance novel. As you can imagine, things got hot and heavy pretty fast and Kendall soon forgot about her quirky, twin soul Joe.

Not to mention that Arie and Lauren were also on this date assisting Jorge with his photo shoot. Both couples basically reenacted Jorge's romance novel for the cameras. It was super awkward and definitely in poor taste.

Even Bachelor Nation thinks so.

Here's what fans are saying on the timeline right now:

What's worse is that Kendall and Leo spent a significant portion of the show making out. So, Kendall and Leo have connected on some weird, carnal level. And Kendall is totally confused about what she's supposed to feel.

She's completely torn between Leo and Joe, which sucks for Joe, since they've been hitting it off three weeks now just for Leo to walk in and sweep his crush off her feet within the span of two hours. Unfortunately for Kendall, Leo's not so conflicted about his feelings for her.

He basically said that he's just "in like" with Kendall and he's keeping his options open (as in, making out with Chelsea in the hot tub). And Bachelor Nation isn't cool with that at all.

As can often be the case in paradise, Kendall is putting all her eggs in the wrong basket. Not only did she ditch Joe for what she thinks is a long-term relationship with Leo (even though they just met!), but Leo is playing the field like he didn't just go on a date with Kendall. He's courting as many women as possible and doesn't even have the decency to let Kendall know what he's up to.

It's a sad and disappointing situation all around. Especially for Joe the Grocer. For the rest of the episode, Joe basically talks ad nauseam about how much he cares for Kendall. He is so clearly heartbroken over the situation, but Kendall is so blinded by her newfound feelings for Leo that she can't see what he's going through.

Ugh, Bachelor in Paradise is definitely a heart-breaker of a show. With any luck, things will work out for Joe, whether it's with Kendall or someone else. He deserves love!