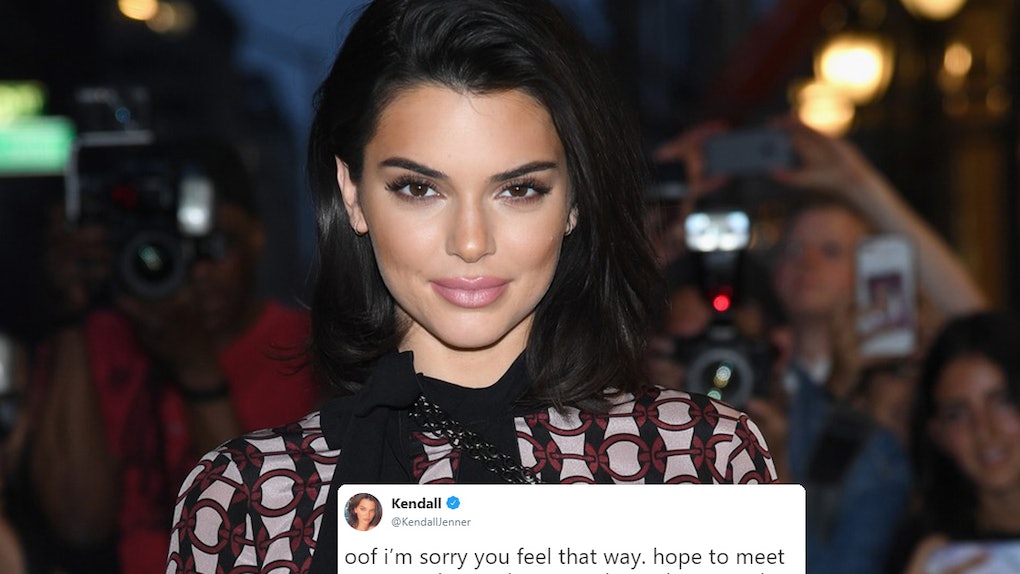 Kendall Jenner is under fire for her reported conduct after her Doberman Pinscher allegedly bit a little girl. People are basically losing their minds over the whole thing. In a new report from TMZ, Jenner and her rumored boyfriend Ben Simmons are accused of simply walking away after the reality star’s dog allegedly gave a five-year-old girl a scare and a bite on the arm. Now, haters are showing up left and right to share their thoughts on Jenner’s reaction to the situation. But Kendall Jenner’s response to a Twitter troll is more than a clapback. It’s an invitation to learn the whole story as sources close to Jenner claim the story making the rounds in the press is not accurate.

Elite Daily reached out to Jenner’s team for comment on allegations, but did not hear back by the time of publication.

According to a report by TMZ, celebrity divorce attorney Bob Cohen claims his 5-year-old granddaughter and her mom were visiting a deli where Simmons, Jenner, and her Doberman Pinscher were sitting outside when the dog allegedly lunged at the girl without provocation and allegedly "bit the little girl on the arm, breaking the skin and drawing a small amount of blood."

Sources close to Jenner insist the incident went down differently, though, telling TMZ that while Jenner's dog was startled by the girl and barked at her, they claim the dog never bit the girl and there was no physical contact. The source went on to insist that Jenner and Simmons did leave, but only after they determined there was no bite since, as the source put it, "they'd never bail on a serious situation."

Despite the contradicting reports about what went down in the alleged dog-bite incident, writer Sophie Ross took to Twitter to strongly express her distaste for Jenner.

“Add this to the growing list of reasons why @KendallJenner is a disturbingly despicable, entitled, unsympathetic, sadistic, uncharitable and self-absorbed human being who doesn't deserve to be idolized. (Yes, I went there),” Ross wrote in a now-deleted tweet.

Jenner had to chime in and defend herself, implying that all was not as it seemed, but she definitely took the high road in this instance.

“Oof i’m sorry you feel that way,” Jenner wrote in response to Ross’ tweet. “Hope to meet you one day to show you the real me, maybe i’ll tell you a little bit about the story too. God bless.”

Wow, that’s an incredibly mature message to send to someone who clearly has no intention of getting the other side of a story. At the very least, Jenner offered to explain her side, too, which shows her confidence about how she handled the situation.

While Jenner kept it civil on social media, her big sister Kim Kardashian couldn’t help but swoop in and defend the model with some slightly stronger words.

“Do u know Kendall? She’s the complete opposite & is the most generous,compassionate person I know!” Kardashian wrote in response to the Ross. “Her being standoffish is anxiety that paralyzes her which u take as rude! Only a despicable, entitled,unsympathetic,sadistic, uncharitable @self-absorbed human would write this.”

Jenner has been very forthcoming about her anxiety. Back in January 2018, Jenner opened up to Harper’s Bazaar about the cause of her serious bouts of anxiety and panic attacks:

Everything is so horrible, it’s hard to name one thing. I just think that the world needs so much love. I wish I had the power to send Cupid around the planet, as cheesy as that sounds. You go online and you see everyone saying the worst things to each other, and it’s hard to stay positive. It’s hard not to get eaten alive by all the negativity.

So, I guess, Kardashian has a point there. Her second point is probably more tangible, even for those who don’t know what it’s like to live with anxiety: