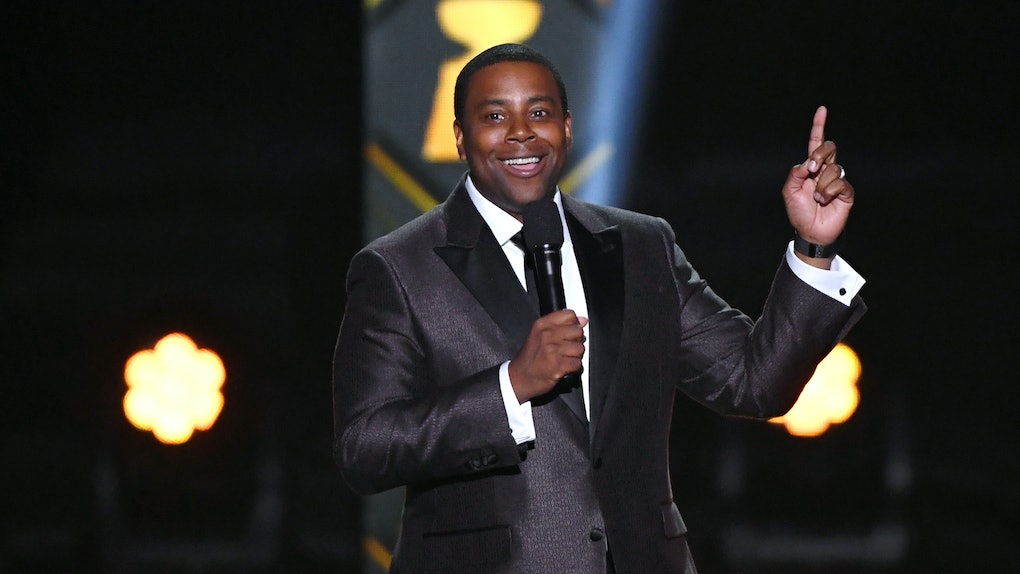 Kenan Thompson knows a thing or two about having fun. After all, he's been entertaining audiences on TV for over 20 years. Ever since he started as a cast member on Nickelodeon's All That in the 1990s, Thompson has had his finger on the pulse of what makes people laugh. Just like the title of his latest NBC show declares, Kenan Thompson knows how to Bring the Funny in everything he does. In an interview with Elite Daily, he reveals details about his decades-long career and breaks down what he thinks makes good comedy.

After making his debut on All That at the age of 16, Thompson went on to star in other Nickelodeon comedies like Kenan & Kel and Good Burger. Then, in 2003, Thompson continued his sketch comedy career by joining the cast of Saturday Night Live. After 16 years and counting on the show, Thompson recently broke the record for being the longest-tenured SNL cast member. Over the years, he’s played iconic characters like his “What’s Up With That?” host and performed joyful impressions of popular figures like Steve Harvey. His high-energy performances have cemented his place as one of the all-time greats.

Playing funny characters comes naturally to Thompson, and it's what he's doing with Tide's comedy-heavy new campaign. Tide has launched a series of videos featuring stars like Thompson, Peyton Manning, and Gwen Stefani debating the merits of doing laundry on various days. Thompson plays a rapper in his video, although his version of the character is a lot sillier than your typical hip-hop star.

"[I'm playing] the rapper version of myself that I’ve always dreamed of being," Thompson tells Elite Daily. "I can’t rap. But I can funny rap all day long. And that’s what this is."

With such a long career in comedy, Thompson's had a lot of time to think about what makes something funny. For him, it's all about the audience.

"Comedy’s so subjective, so it’s just kind of whatever makes the individual laugh in that moment," Thompson explains. "If you can go backwards from there and get back to that moment, that’s kind of how comedy works, with the setup and the punchline of it all."

On Bring the Funny, undiscovered comedians perform in front of a live audience and compete for the biggest laughs. Thompson is a judge alongside fellow funny people Jeff Foxworthy and Chrissy Teigen, and all three of them share their comedy expertise with contestants. Thompson has put a lot of thought into what goes into the process of getting a laugh out of people, so he strives to share helpful feedback on the show.

"We’ve all been on the other side of that 'no,'" Thompson says. "We’ve all had to figure out what exactly are people looking for with whatever we’re presenting them. We all have been trying to be very conscious about that. Don’t just, like, hate on something just because you didn’t enjoy it. Tell us why."

Recently, Thompson has gone back to his roots by producing a reboot of All That. The new sketch series premiered in June of this year, and Thompson says it’s been gratifying to watch a new group of young comedians take the stage. Thompson says the new cast is extremely talented and hard-working, and watching them has brought back many of his own memories.

“It’s an awesome kind of look into a time portal, like almost looking at myself, you know?” Thompson explains. “And being a kid and being so excited to be working on TV and stuff like that. It didn’t matter the hours, it didn’t matter that we were doing school on top of that and all that stuff. It was just never-ending energy, just wanting to perform, wanting to hear those reactions and hear people laugh and be entertained.”

For Thompson, one of his biggest joys is knowing his comedy has made a positive impact on people's lives. He explains that sometimes performing can feel "kind of mechanical" because he's focused on getting the job done rather than thinking about the effects of his work. But afterward, when he's out in the real world or scrolling through Instagram, he'll receive messages from people who explain just how much his comedy means to them.

"[My favorite part of comedy is] the reaction of when it goes right," Thompson says. "You tell a joke and people react to it, or when people come up and say, like, 'You got me through so many tough times.'"

Luckily for all the fans who count on Thompson to make them laugh, he really does bring the funny everywhere he goes.