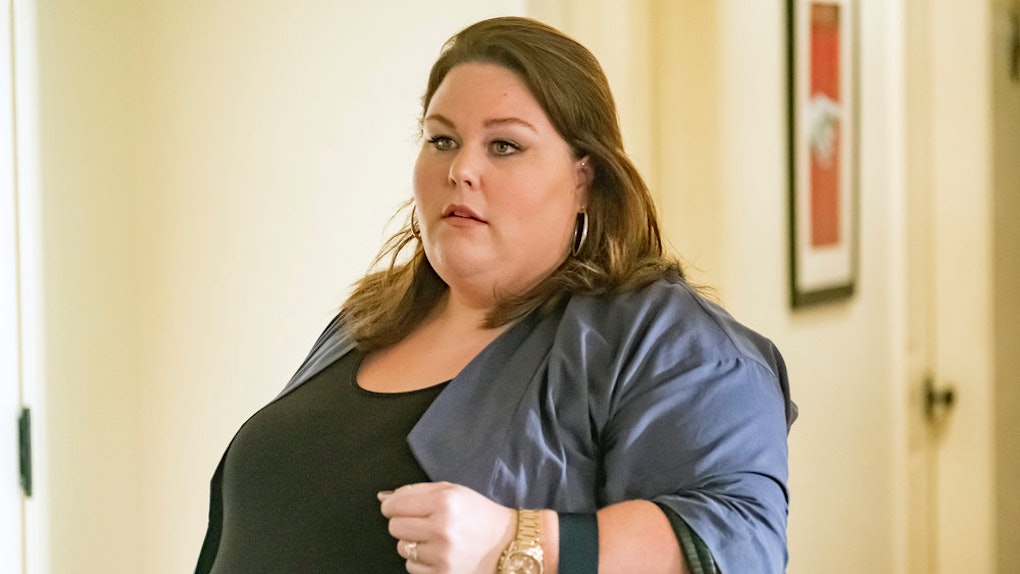 This week, This Is Us was a bit of a slow build, with a long digression into the chicken pox, a snowstorm, plus Kevin's pain killer addiction getting worse, and a heartbreaking twist in Randall's foster care sitch. But all the tragedy wound up with one lovely reveal at the end of the episode: Kate is pregnant on This Is Us.

This week seemed mostly to be focusing on Randall and Kevin far more than Kate. Kevin's pain killer addiction has been pending since last week, and this week went full blown. Randall keeps trying and keeps screwing up when it comes to his new foster kid, Deja, including ruining the bond that Beth had so carefully worked to lay groundwork for.

All this seemed to leave Kate in the place that the production kept sticking her last season: The "I'm unhappy with my weight" corner. It's a frustrating place for the character to be, because there are so few women on TV who are of the size that most women are in reality. (The average size for a woman in the United States is 18.) Instead of celebrating her, the production spent most of the season acting like being that size was some sort of tragedy she had to get over.

This season, it felt like the production heard the complaints. So far we've had Kate head out to find a singing career without shame. She got told, in fact, that her size wasn't a factor, she just needed to be a better singer. Everything seemed to be going in the right direction.

Then this week it was like a 180 back to the bad old days. Our first scene was Kate exercising while staring at a muffin. Our next had her running to yoga because she'd missed a workout. Her third was trying on a "goal" dress, when literally earlier in the hour the show had feigned horror at the concept.

What was going on?

Turns out the show was faking us out. Kate's return to weight obsession actually isn't about her weight at all. it's about her health. Because at 37 years of age, Kate has gotten pregnant for the first time, and she is terrified of losing the baby. So much so that she hasn't even risked telling Toby yet.

Fans were overjoyed, to say the least.

One of the strangest things in the show, for the record, is that Randall is the only one of the triplets to have children. I have always thought it highly peculiar in a show called This Is Us that both Kevin and Kate are in the minority of the country, and neither have children by 37; Kate especially, who at this age is considered to have "advanced maternal age" (anything over 35 is).

It's proof that fans want the show to be more realistic, and have those on This Is Us be more like us. Because the celebratory GIFs were everywhere.

Others were just in shock at the twist, especially coming on the heels of such a great fake out all episode.

And moreover, they're now worried that Kate's refusal to tell Toby right away will not go over well. The man is a complete control freak, as we've discussed before, and Kate keeping this from him could go very badly.

Personally, I'm down with keeping Toby's overprotective self out of the picture as long as possible. Also, keeping Kevin in the dark would be good, too. He's got enough problems.

But hey, maybe Kate can call Randall and ask him for advice. Let Beth take care of Deja without him getting underfoot and ruining everything, and distract him with that baby he's been wanting. Everyone wins!

More like this
Here's How To Vote For The Next 'American Horror Story' Theme Among 6 Options
By Cianna Garrison
This Reported Update About HBO Max's 2021 'Friends' Reunion Is Great News
By Cianna Garrison
Demi Lovato Says She Can't See Herself Getting Pregnant, But She Still Wants Kids
By Brandy Robidoux
Stay up to date